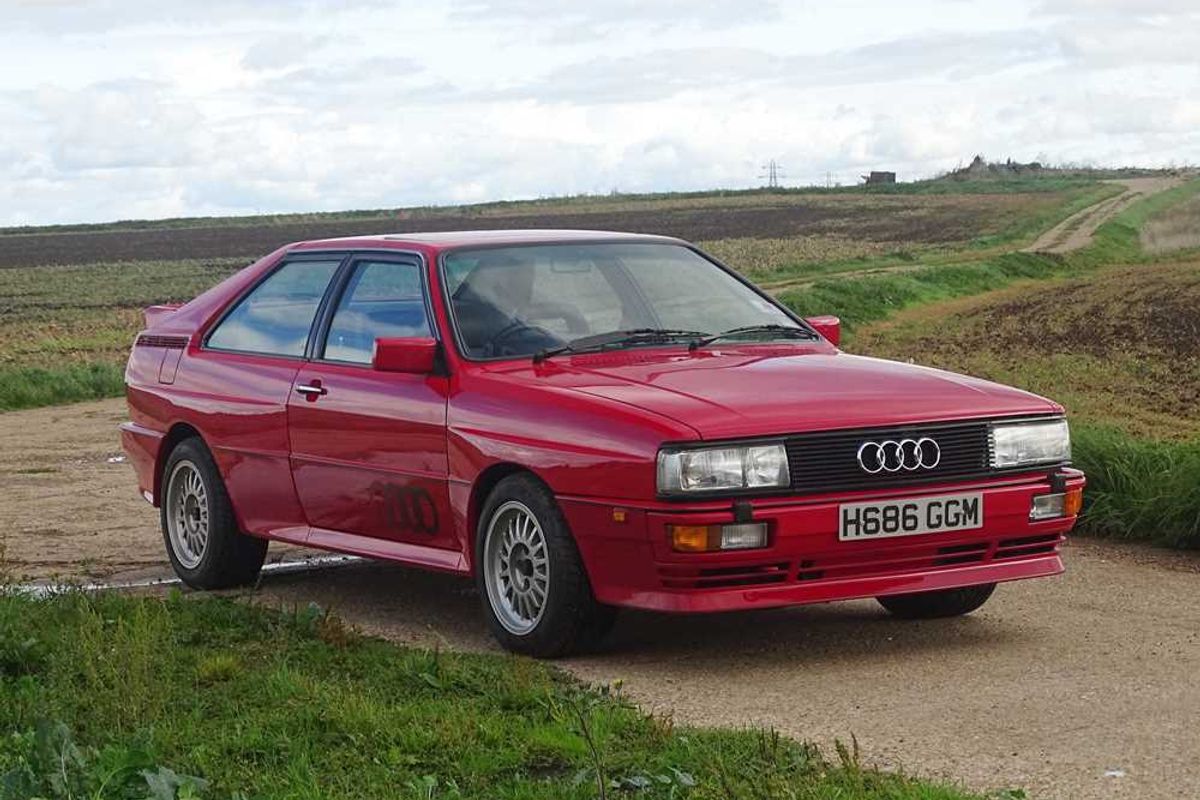 Only four former keepers from new and cherished by its current custodian for over fifteen years
UK-supplied, right-hand drive example with a warranted 89,000 miles on the odometer
Recently the subject of much expenditure including work to the fuel, coolant and braking systems, all fully overhauled by respected Quattro ‘guru’ Robert Karlinski
Fitted with a Milltek sports exhaust system and sensibly uprated with period-correct Porsche front brake callipers
Offered with a large and comprehensive history file, comprising MOT certificates dating back to July 1993, invoices for much service and maintenance work, together with a receipt for a replacement KKK26 Turbocharger back in August 2001.

The Audi Quattro may not have been the first 4wd production car (that honour belongs to the 1966 Jensen Interceptor FF), but its place in history is assured. Thanks in no small part to its enormous rallying success, the Quattro popularized all-wheel drive, and is now regarded as one of the most influential and important sports cars of the 1980s.

The brainchild of Jörg Bensinger, an Audi chassis engineer, development work was started in 1977. Three years later the finished product was released. Although the floorpan had much in common with the 80 and the running gear was largely taken from an Audi 200, the Quattro used a manual centre differential lock (operated by levers next to the handbrake) to govern the 197bhp and 210lb ft power outputs delivered by the 2.1-litre in-line five cylinder turbocharged engine.

By the time this particular car arrived in 1990, the crude cable-operated 50:50 split differential had been replaced with a much more advanced Torsen (torque sensing) diff and the engine had been uprated with double overhead camshafts and a larger 2,226cc capacity, upping power to 217bhp.

Regarded by many as the best of the Quattros, the 20 Valve now represents a great potential investment opportunity, with this example offered in arguably the best and most iconic colour combination of Tornado red over grey.

The paint and bodywork are both described by the vendor as being in very good condition and complete with excellent panel gaps and all original decals - from the side pinstriping to the iconic Audi roundels on the doors – all remain seemingly untouched and as fitted from new.

A lifetime Audi enthusiast, the vendor of H686 GGM describes the car as “Completely original in every respect, including the OEM exhaust system which will be supplied with the car (vehicle currently fitted with a Milltek SS system). The only variation from standard production specification is the fitment of Porsche front brake callipers which are considered a well-sought upgrade and not a diversion from originality (parts were shared between the companies at this time).”

When asked about the condition of the engine and drivetrain, our vendor states that everything is “excellent with no faults or issues”. His confidence in the vehicle speaks volumes and he went on to say – “the car drives and performs like an 8,000 mile example, not a vehicle that has covered 80,000 miles.”

Inside, the car is a time-warp. The grey leather/cloth seats, orange LCD dash and Audi-Gamma stereo are all very reminiscent of the era and the vendor tells us it is all in “very good working order”.

An icon from the golden era of International Rallying, 20V Quattros will undoubtedly continue to be highly sought after, especially when offered in an honest and unmolested state like this example, which also benefits from a substantial period of single ownership. Pre-sale viewing is highly recommended and we feel this may turn out to be rather a smart investment in years to come.