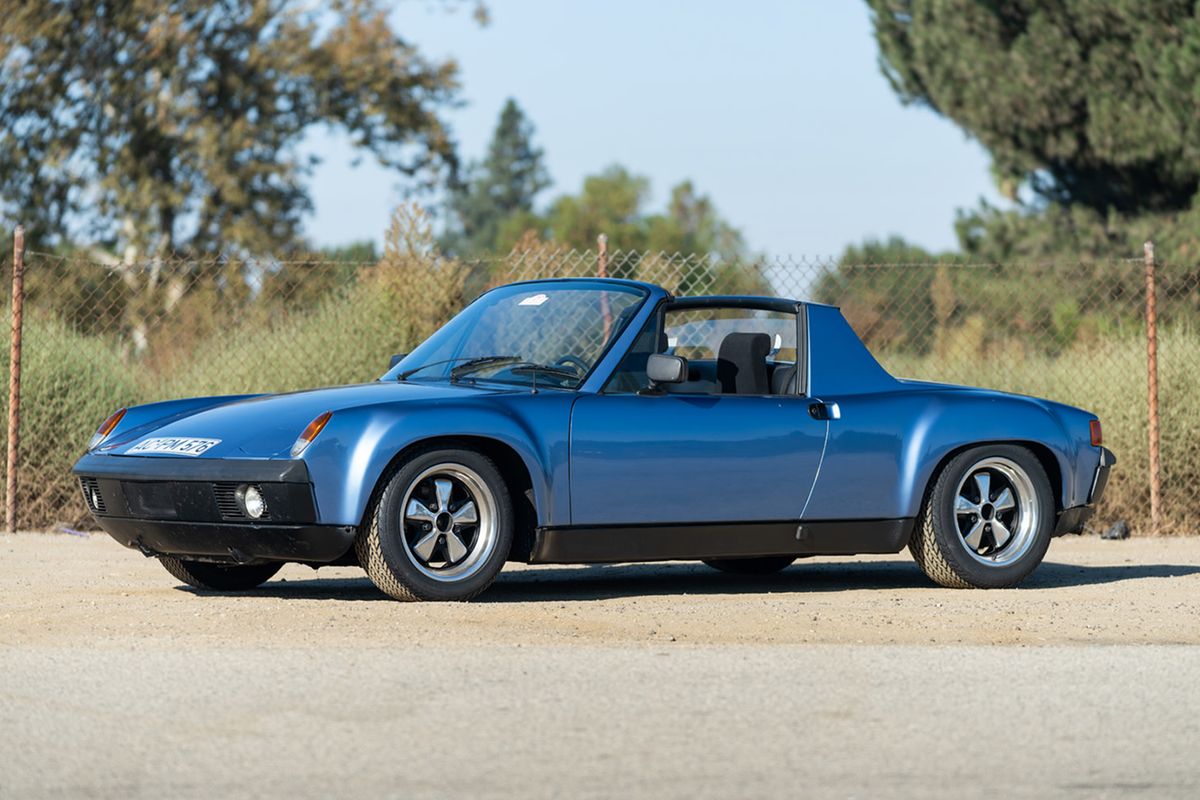 Factory-Equipped M471 Package 914/6; One of Only 23 Examples Built
Delivered New to Germany Finished in Gemini Blue over Black
Equipped with Desirable Type 911/83 (Carrera 2.7 RS) Engine
Offered with Original Maintenance Booklet, German Registration Records, and COA
Among the Most Desirable of All 914s; A Model Rarely Offered for Public Sale

In addition to the standard four- and six-cylinder models, Porsche developed a few special variants of its 914, the most famous being the competition-prepared 914/6 GT, the exclusive road-going 916, and the experimental eight-cylinder 914/S. Another rare and often overlooked 914 variant was quietly announced in a March 1971 sales bulletin – the Competition Option Group M471.

Intended to homologate the 914/6 for SCCA production-class racing, the M471 package consisted of GT-style steel fender flares, rocker panels, and front valence, as well as 6" x 15" Fuchs wheels, 185/70VR15 tires, longer wheel mounting bolts, and 21 mm spacers. Primarily offered by dealers in kit form, to be installed post-production, the M471 package was also available as a factory option, though it was rarely specified. In fact, just 23 examples of the M471-equipped 914/6 left the Porsche factory during 1971 and 1972.

The Porsche presented here, chassis 9142430259, is among this exclusive group of factory-built M471 914/6s. It is one of eight built during the model’s final year and the second-to-last example produced, the final car being chassis number 0260. According to factory records, this car was originally finished in Gemini Blue (code 8610) with interior trimmed in black leatherette and corduroy inserts. In addition to the rare M471 package, optional equipment included front and rear sway bars, tinted glass, and a center seat cushion.

In June 1972, chassis 0259 was delivered to its first owner, Dr. Gunter Heynen of Rheydt, Germany, who immediately put the 914/6 to good use. As is noted in the original factory-issued maintenance booklet, the Porsche had covered more than 40,000 km during its first year on the road. According to original German registration papers (Kraftfahrzeugbrief), in the mid-1970s, chassis 0259 received several mechanical upgrades, including the fitting of a more powerful fuel-injected 911 S engine, ventilated disc brakes, a front spoiler, and wider 7" and 8" Fuchs wheels.

It is believed that Dr. Heynen kept his Porsche until 1991, when it was sold to Udo Frey of Aachen, an active member of the German 914/6 Club. During his ownership chassis 0259 was further upgraded with a desirable 911/83 engine, the same type used in the iconic Carrera RS 2.7. In 1994, the M471 was sold to David Hatch of Milwaukee, Wisconsin, shipped to Florida, collected by Mr. Hatch’s agent, Martin Arnaud, and then entrusted to ICI International Inc. of Orlando for federalization.

Since its arrival in the US over 25 years ago, this rare Porsche has been kept in static storage and will require a mechanical re-commissioning before road use. Remarkably, this 914/6 has not been exhibited or offered for public sale, giving its next owner the opportunity to debut an extraordinary, off-the-radar car at some of the most exclusive Porsche gatherings.

Offered with a tool kit, German registration plate, and Porsche Certificate of Authenticity, as well as the aforementioned maintenance booklet and registration papers, this Gemini Blue factory-built M471 914/6 presents an exciting opportunity for discerning collectors to acquire one of the most rare and sought-after Porsches of the era.

Late Production 914 2.0; Retained by Original Owner from 1976 to 2016
Refinished in Original Light Ivory with Yellowstone Leatherette Interior
Porsche Classic Certified with Matching-Numbers Engine and Gearbox
Benefits from a Comprehensive Restoration Completed in 2017
Offered with Original Window Sticker, Bill of Sale, Books, Tools, and Records Dating to 1976