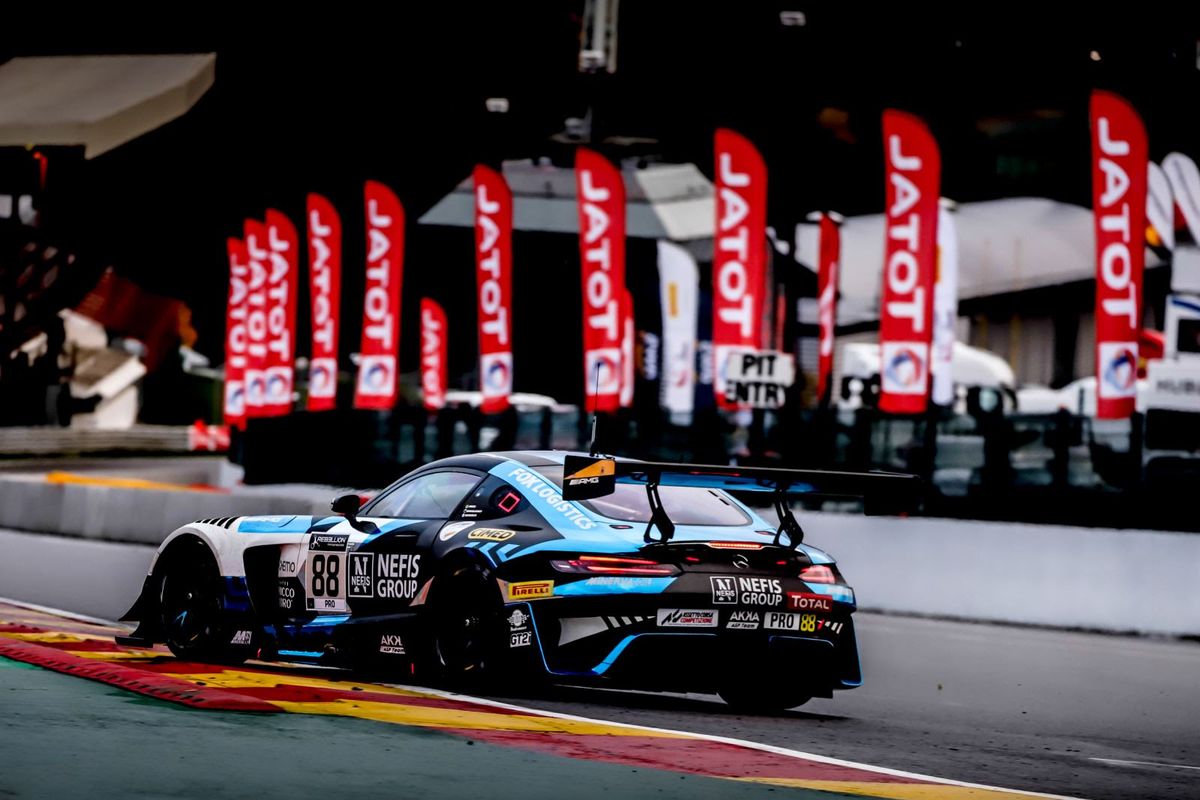 Mercedes-AMG Team AKKA ASP will start this year's Total 24 Hours of Spa from the front of the grid after a blistering lap by Raffaele Marcello secured top spot in last night's Super Pole session.

The deciding shootout was staged on a slippery surface and with darkness quickly descending on Spa-Francorchamps, yet this did nothing to diminish the speed displayed by the 20 Super Pole contenders.

The battle for top spot was hotly contested among the final five runners, with last year's Super Pole winner Maro Engel the first to hit the front at the wheel of the #4 Mercedes-AMG Team HRT entry.

But the German's advantage did not last long. Marciello, running fourth from last, displayed supreme car control and raw speed to post a 2m32.166s on the first of his two flying laps. There was no improvement on the next tour, but the Italian had set a formidable benchmark that was 0.356s clear of Engel.

Frederic Vervisch went next but could not trouble either Mercedes-AMG driver, taking a provisional P3 in the #66 Audi Sport Team Attempto machine with a 2m32.881s. Patrick Pilet was the penultimate runner but found himself on the fringes of the top-10 with a best of 2m33.541s.

That just left Kelvin van der Linde in the #31 Audi Sport Team WRT entry. The South African ace posted a 2m32.386s on his first lap, showing especially well in the final sector. It was 0.220s shy of Marciello, but the Audi man had a final roll of the dice.

Tensions rose when he went quicker than the AKKA ASP driver in the first sector, but a mistake at the exit of Pouhon cost Van der Linde dear and assured Marciello of pole position. This sets up an all-star front-row for today's race, with Mercedes-AMG Team AKKA ASP alongside Audi Sport Team WRT.

The same brands will share the second row, with Engel finishing the session in third and Vervisch taking fourth. Christopher Haase put the #25 Audi Team Sainteloc machine a strong fifth, ahead of GPX Racing's Thomas Preining in the best of the Porsches.

The top-10 was completed by the #51 AF Corse Ferrari, the #63 Orange1 FFF Racing Lamborghini, the #163 Emil Frey Racing Lamborghini and the #47 KCMG Porsche of reigning winners Kevin Estre, Richard Lietz and Michael Christensen. The Hong Kong squad’s 911 GT3-R suffered a puncture late in the warm-up session that preceded Super Pole, but Estre was still able to secure a very promising grid position for yesterday afternoon.

As the only Silver Cup runner to qualify for Super Pole, the #89 AKKA ASP Mercedes-AMG crew had already secured top spot in its class . Benjamin Hites ran in last night's session, placing 19th among the ultra-competitive field.

This year's Total 24 Hours of Spa will get underway today at 15.30, marking 20th edition of the GT era and the 10th since GT3 became the premier class in 2011. Every minute of the action will be streamed live on the Total 24 Hours of Spa website, the event's official Facebook page and the GT World YouTube channel.

Raffaele Marciello, #88 Mercedes-AMG Team AKKA ASP: “It was a good qualifying for us. It’s always good to start in the top-five so that you can stay away from trouble at the beginning of the race. We expect a dry start tomorrow, so we did not change the car too much. We slightly adapted the tyre pressures in order to find the sweet spot more easily. The absence of track limits does not change much for me; it’s the same for everyone. They said we could do it, so we did it.”