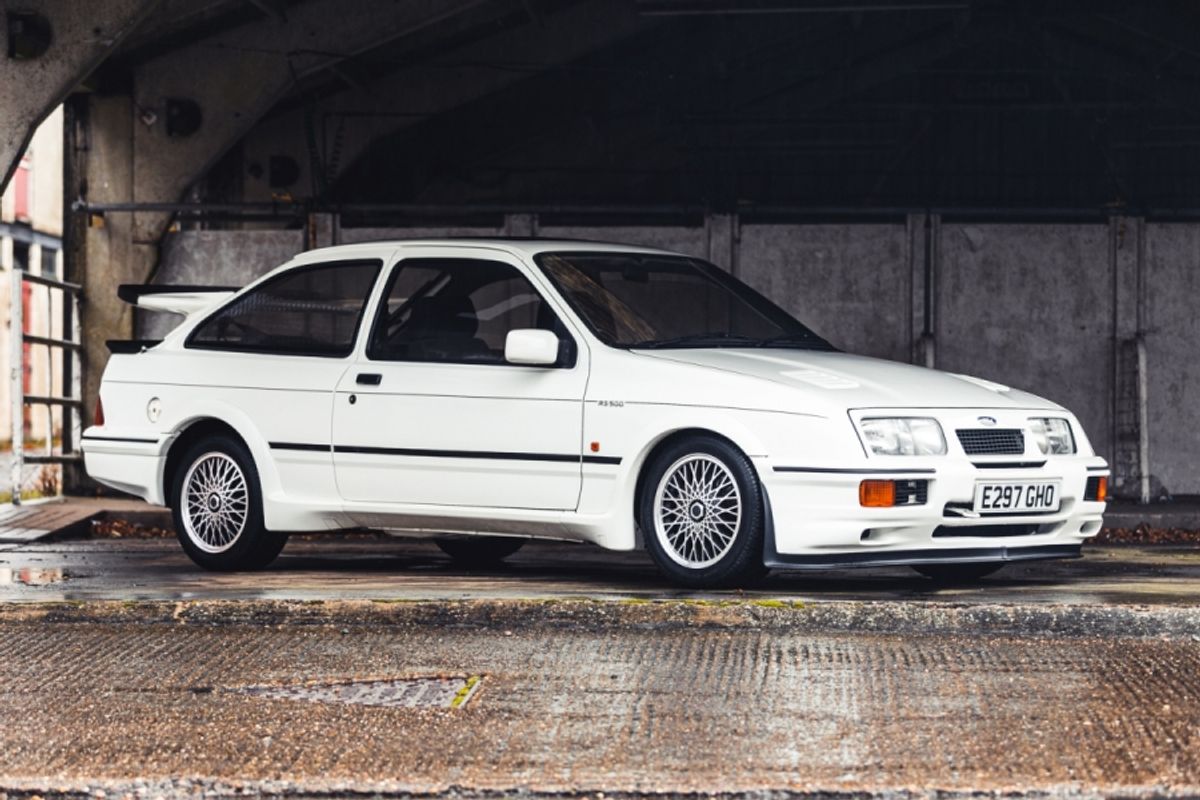 Low mileage and amazingly original throughout.
With just two registered keepers, this incredible find is surely unrepeatable
Number 451 of 500 and one of only 56 Diamond White cars produced
Only 12,047 miles indicated supported by a continuous service history and older MOTs
Acquired by its second owner in 1988, who continued to cherish it for the next 28 years
On offer from an extensive collection where it has been looked after in recent years
This rare car remains in genuine and unmolested condition with all its original books
Recent light renovation and a full recommission/service, by an RS500 specialist
The most revered of all Cosworth cars… the legendary RS500

The original Ford Sierra RS Cosworth was the first Ford to wear the Cosworth badge and was presented to the public at the Geneva Motor Show in March 1985.  It was introduced as a means of homologating the Sierra for 'Group A' Touring Car racing, with a requirement that 5,000 cars were built and sold.  Launched for sale in July 1986, and based on the three-door Sierra body-shell, it was designed by Ford's Special Vehicle Engineering (SVE) and was powered by a Cosworth-designed 2.0-litre turbo engine of now-legendary repute.  At this time, the Sierra Cosworth was a new kind of performance car - a ‘blue-collar hero’ able to humble true sports cars! In total 5,545 cars were produced - of which 500 were sent to Aston Martin Tickford for conversion to the Sierra ‘RS500 Cosworth’.  If the RS Cosworth was a homologation car, the RS500 was an evolution special.  Once Ford had built the requisite 5,000 RS Cosworths, Group A rules allowed an upgraded 'evolution' model to be launched. This could carry changes focused on improving its racing potential, provided Ford sold 10% of the original number as road cars, hence the 500.  The RS500 was announced in July 1987 and had a mechanically uprated Cosworth engine (more similar to the one to be used in competition), with power boosted to 224bhp, upgraded brakes, modified bodywork and the cachet of being hand-assembled - the RS500 really is the ultimate 1980s Fast Ford!  Indeed, during the model’s 30th anniversary year in 2017, the RS500 was named the ‘Ultimate Cosworth’ by one of the UK’s biggest one-make car shows.