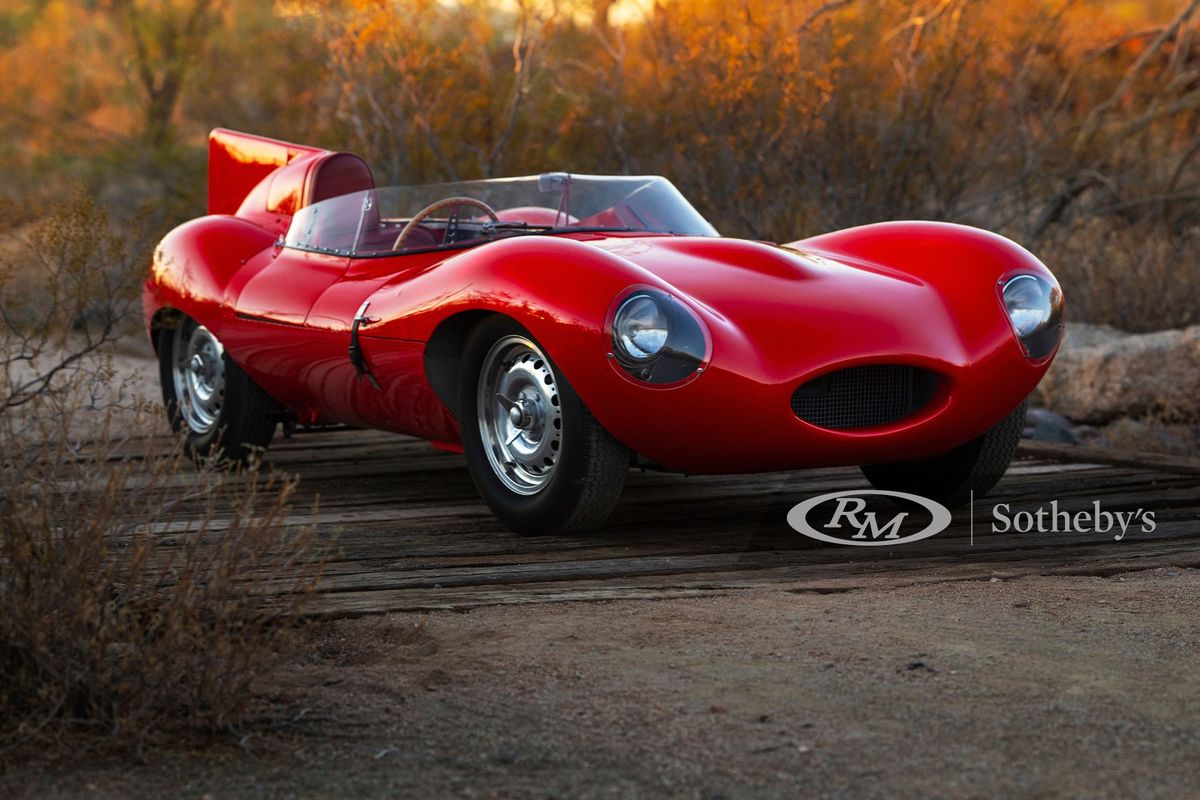 On Friday, 22 January, RM Sotheby’s kicked off its 2021 auction calendar with the company’s 22nd annual Arizona auction, held this year at the OTTO Car Club in Scottsdale with limited, by appointment only in-person attendance, achieving $35,065,900 in total sales with 90 percent of all lots finding new homes. The one-day auction saw bidders from 35 countries around the world bidding in the room and via phone and internet.

The undoubted star of the auction was a highly original 1955 Jaguar D-Type with substantial period race history, which sold to a bidder on the phone for a final $6,000,000. Wrapped in Red with an interior trimmed to match, the car was one of a very small number of D-Types to be so finished when new. Purchased new from Bernie Ecclestone by British racer Peter Blond and retaining many of its original components today, the well-documented example goes to its new caretaker as a worthy candidate for vintage competition at the highest and most prestigious levels.

The second highest price achieved was an elegant and extremely rare 1937 Bugatti Type 57SC Tourer by Corsica, one of eight examples bodied by the coachbuilder and just two examples in the four-seater configuration, which brought $4,735,000. Retaining its original chassis, engine, gearbox, differential, and body, the Bugatti came to the Arizona auction with known and fascinating ownership history, including time spent in the esteemed collections of Judge North and General Lyon. Additional pre-war classics also brought strong prices, including a CCCA Full Classic 1932 Cadillac V-16 Convertible Coupe by Fisher, one of 14 examples ever built, of which four survive today, and one of only a handful that were built with a factory rear-mounted spare, which surpassed its high estimate and went to a new home for $1,022,500; and a multi-award winning, CCCA Full Classic 1933 Packard Twelve Individual Custom Convertible Sedans by Dietrich, one of two extant and a completely numbers-matching example, which brought in $819,000.

Top sales were also highlighted by several modern supercars, including a 2020 McLaren Speedtail, the first example of the marque’s most technologically advanced and fastest road car to sell at public auction. A masterpiece of automotive engineering with central driving position and three-seat configuration, the car was one of only 106 examples produced, paying tribute to the 106 McLaren F1s. Highly optioned by MSO and showing only 30 miles on the odometer at the time of cataloguing, chassis no. 36 went to its next owner for $3,277,500. Additional well-sold supercars include a highly optioned 2019 McLaren Senna, the 95th of 500 examples produced and wearing Dramatic Visual Carbon Fiber bodywork, at $1,044,000; a desirable 2019 Ford GT ‘Lightweight’, a special option made available only to select applicants, which brought in $967,500; a 1993 Cizeta V16T, one of just nine examples completed and ordered new by the Royal Family of Brunei, which achieved $665,000; and an exclusive factory 1998 RUF Turbo R, extensively mechanically refreshed in October of 2020, which surpassed its high pre-sale estimate of $575,000 and sold for a final $764,000.

Also claiming spots within the top ten were three highly sought-after 1950’s sports cars. Displayed at the 1954 New York World Motor Sports Show and 1954 Geneva Motor Show, the exclusive 1954 Ferrari 375 America Coupe by Vignale, one of just three examples bodied by the coachbuilder, sold for $2,557,000. The gran turismo came to the Arizona auction in its original and stunning burgundy and silver-grey finish over a beige interior and retaining its original 4.5-liter Lampredi V-12 engine. Another classic Ferrari, the 1956 Ferrari 250 GT Alloy Coupe by Boano, also caught bidders’ attention, selling for a final $1,352,500. One of just 14 alloy-bodied coupes produced by Carrozzeria Boano between 1956 and 1958, the Classiche-certified Ferrari went to its new owner equipped with its matching-numbers V-12 engine, gearbox, and differential and in exceptional restored condition. Rounding out the group, a delightful 1957 Mercedes-Benz 300 SL Roadster presented in Light Green Metallic over dark green interior with a dark green convertible top sold for $1,066,500.

“It was tremendous to start the year off on such a positive note given that we were the sole remaining auction company to host a live event for the annual Arizona weekend. In working with the local authorities and the capable team at OTTO, we were able to safely welcome clients back to the live auction format,” said Gord Duff, Global Head of Auctions, RM Sotheby’s. “Our team worked extremely hard to ensure that the auction preview and event itself provided a safe atmosphere for clients to inspect cars in-person. Additionally, we saw that the added benefit of our preparation which included thousands upon thousands of additional detailed photographs, condition reports and documentation on all cars all available to our clients in advance of the auction truly helped make those who weren’t there feel comfortable bidding, whether via telephone, internet or absentee. With a diverse top three leading the charge—a period-raced D-Type, a beautifully presented Bugatti Type 57SC with notable provenance, and the first Speedtail to be sold at public auction—this sale proved once again that best-of-category, top-quality cars of every era continue to draw significant interest from collectors and bring strong prices.”