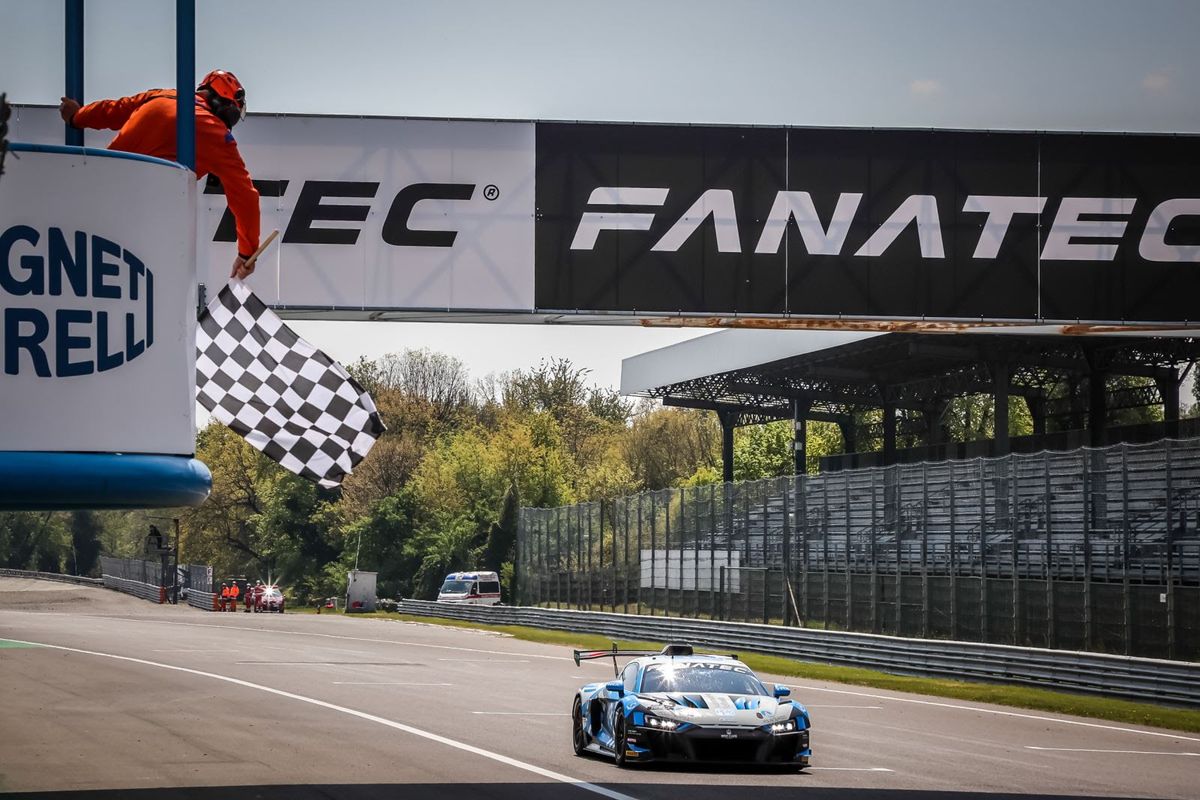 Despite losing out at the Variante del Rettifillo on the opening lap to the fast-starting #5 Speed Factory Racing Porsche 911 GT2 RS of Michael Vergers, pole-sitter Anders Fjordbach responded immediately at the first Lesmo, then stretched out a near 8-second lead before handing over to Mark Patterson at the stops.

Though the gap between the two cars came down over the second stint once the Porsche battled back from a slower stop in Aurelijus Rusteika’s hands, Patterson still had enough time to spare to take the chequered flag and put Audi on the top step of the podium in the Pro-Am stakes at the first attempt.

Lamborghini tasted the winner’s champagne in the Am Cup battle; having started on the back row of the grid, Jordan Collado successfully navigated an eventful opening lap to move into the top three.

They dropped back as the stint wore on, but a blinding series of overtakes from Patrick Zamparini during the second half of the race ensured the #44 finished second on the road and was victorious in the Am Cup battle.

Pro-Am: ‘High Class’ performance from Audi to make history
Fjordbach’s pace in the #33 was never in doubt after a strong lap to take pole position in qualifying, but it was Vergers' Porsche that made the headlines at the start.

The #5 swept around the outside to move from fourth into the race lead at the first chicane, but Fjordbach’s response at the first Lesmo was swift and decisive.

From there, he set about building a comfortable 8-second advantage before pitting, handing over to Patterson.

Vergers had boxed the lap prior, but the Porsche’s stop was 12 seconds shy of High Class’ time, leaving Rusteika fourth and with two cars, the #81 PK Carsport Audi in the hands of Peter Guelinckx and the #16 True Racing by Reiter Engineering KTM X-BOW driven by Stefan Rosina and Sedhi Sarmini, between him and the race lead.

The Porsche was able to clear both drivers and return to second spot, but a late charge through from Zamparelli ensured it would be third on the road, and second in Pro-Am.

Guelinckx – in the #81 after Bert Longin’s storming drive through from the back after a spin at Turn 1 – managed to hold off Sarmini until the closing laps, when the Austrian finally found a way through, and in doing so claimed the final spot on the Pro-Am podium.

Fairbrother pulled off one of the moves of the race onto the final tour, outbreaking the #7 KTM of Christoph Ulrich and Adrian Spescha (Sportec AG) into the first corner on the outside line to preserve the position, having been passed earlier.

Am: Zamparini’s charge puts Lamborghini in the winner’s circle on home soil
As home victories go, Jordan Collado and Patrick Zamparini’s swashbuckling drive from the back row of the grid to the Am Cup victory for Lamborghini, on Italian soil, would have to rank up there in recent memory.

After starting on the back row, Collado made strong progress on the opening lap as Longin & Guelinckx’s #81 Audi made contact with the LP Racing-run machine of Luca Pirri and Stéphane Ratel.

Whilst the former survived, Pirri was beached in the gravel and unable to continue, bringing out the safety car. When the race resumed, Collado dropped back to sixth before being the first to pit for a driver change.

Zamparini mirrored his team-mate’s first-lap antics and began making passes, moving up past Sarmini at Ascari, then Guelinckx at the Rettifillo chicane to assume third. He then hunted down and passed Rusteika for the runner-up spot, eventually making his way through into second with a mere two minutes left on the clock.

Nearly 45 seconds separated Zamparini from his nearest Am rival, the #7 Sportec KTM of Ulrich and Spescha, but the gap back to third could scarcely have been closer.

That final spot on the rostrum went to Klaus Angerhofer and Hubert Trunkenpolz, with the CMR-run Ferrari 488 Challenge of Alexis Berthet and Patrick Michellier taking fourth.

Hans Joachim Stuck had previously led the Am class battle, but a spin on the exit of the Ascari chicane put the #24 back in the pits, and out of the race.

Both he and Kris Rosenberger will have another chance, however, when the Fanatec GT2 European Series reconvenes for the final race of the weekend at 10:30 CET tomorrow (18 April).