Gooding & Company returns to Florida for its 12th annual Amelia Island Auction with a powerful lineup of star cars, including a 1959 Porsche 718 RSK and other key selections from the prized German marque. The company’s much awaited sale of sought-after motoring icons will take place on Friday, March 4, 2022 at 11:00 am EST, ahead of the weekend’s Amelia Island Concours d’Elegance.

“Over the past decade, Gooding & Company has sold many significant Porsches at our Amelia Island Auction and we are excited to continue this tradition into 2022,” said Gooding & Company Senior Specialist, David Brynan. “These cars represent the bookends of Porsche history and have never before been presented at auction. The RSK is a fantastic four-cam Spyder which has been in single family ownership for decades, while the Turbo S Leichtbau, Carrera RS 3.8, and Carrera GT represent the very best of the modern era.”

1959 Porsche 718 RSK (Estimate: $2,500,000 – $3,500,000)
One of the most iconic and influential Porsches of all time, the 718 RSK was developed to be the ultimate lightweight sports racing car when introduced in 1957. Replacing the then-dominant Porsche 550A, the new four-cam Spyder, named the 718 RSK, emphasized innovation. The RSK featured faired-in headlamps and a far more aerodynamic body than its predecessor, along with a revised chassis and suspension setup. These improvements resulted in countless wins at the most important races of the time, and the RSK was unstoppable, taking on competition at Sebring, Le Mans, and the Targa Florio. In 1958, the RSK finished first in class and third overall at Le Mans, and in 1959, it won the Targa Florio outright, dominating the track. Porsche built a total of 34 RSKs, and the car solidified its status as an utter racing powerhouse in the late 1950s and early 1960s.

The 1959 Porsche 718 RSK presented here, chassis 718-018, is an exceptional offering from long-term family ownership with a proven racing history. It was purchased new by California privateer racer and Porsche-Volkswagen dealer Emile Pardee, who campaigned the car successfully in various SCCA events. Demonstrating speed and ability, Pardee won his class in 10 races with chassis 718-018 from 1959 to 1961, including three overall wins. Following its successful racing career, the car eventually made its way to the East Coast and the consignor’s father purchased it in 1970 from a physician in South Carolina. Chassis 718-018 has been with the consignor’s family ever since, and remarkably comes to auction after over 50 years of single family ownership.

718-018 remained in static storage until 2014, when it underwent a painstakingly complete, photo-documented restoration over the course of four years by noted Porsche four-cam specialist Ray Morgan of Vintage Motorcar Restorations in Jasper, Georgia. The restoration was meticulous in its attention to detail, and the car was even painted in nitrocellulose lacquer as it was originally presented by the Porsche factory. The paint was sourced directly from Germany, and antique spray guns were used in the name of ultimate authenticity. Since the restoration was completed, chassis 718-018 has been shown selectively, only making appearances at the 2018 Amelia Island Concours d’Elegance and at the Porsche Experience Center in Atlanta, Georgia. It is an exciting example that has been seldom seen over the last 50 years and presents stunningly today. To acquire an RSK such as this one, which has remained in single family ownership for so long, is an especially enticing opportunity for the discerning Porsche collector.

1993 Porsche 964 Carrera RS 3.8 (Estimate: $1,800,000 – $2,400,000)
A motor sports thoroughbred, the Porsche Carrera RS 3.8 was engineered for optimized performance and racing prowess. In the early 1990s, engineer and race car driver Jürgen Barth proposed a new 964-based racing car, and in 1993, the Carrera RSR 3.8 was unveiled, instantly becoming a success by taking wins at Le Mans, Daytona, Sebring, Nürburgring, and Spa. In order to homologate the RSR, Porsche built a number of road-going models with the same general characteristics of the race cars, and thus, the 964 Carrera RS 3.8 was born. Boasting specialized suspension and braking capabilities, the model also featured a seam-welded chassis, lightweight glass and aluminum panels, a 300 hp flat-six engine, wide Speedline wheels, and an aerodynamic package.

Porsche manufactured just 55 RS 3.8 examples in total, and of these, only 11 Clubsport models (Option Code M003) were produced. The Clubsport models offered specifications that made these cars as close as a customer could get to buying a road-going RSR 3.8. As the most highly optioned and unique car of the 55 RS 3.8 examples built, the 1993 Porsche 964 Carrera RS 3.8 offered here is also one of the ultra-rare Clubsport models. It was a factory one-off built by special request for Tobias Hagenmeyer, the CEO of Getrag Group, a transmission supplier to Porsche. This striking example is presented in sleek black livery with yellow-painted seatbacks, brake calipers, and model designation, among other details. It features seven wholly unique characteristics not found on any other RS 3.8. The car is offered with an exceptionally well-documented history file, including the factory notes that confirm its special build details, and comes complete with books, tools, a warranty card, and accessories. As the lowest-mileage, most original Clubsport extant, and arguably the finest and most important of all 55 RS 3.8s, this car has never before been publicly exhibited or offered for sale, making this auction opportunity second to none.

2005 Porsche Carrera GT (Estimate: $1,800,000 – $2,400,000)
Often referred to as the last analogue supercar, the powerful Carrera GT made its debut at the 2003 Geneva Motor Show, effectively becoming the most recent Porsche supercar since the introduction of the 911 GT1 in 1996. Featuring an advanced carbon fiber monocoque chassis and subframe, pushrod-activated suspension, carbon ceramic ventilated disc brakes, and a normally aspirated 5.7-liter V-10 engine, the Carrera GT was a road-going phenomenon with equal capabilities on the race track. Initially engineered in the abandoned LMP1-98 prototype program, Porsche built just 1,270 of these cars, concluding production in 2006.

Of all the Carrera GTs built, only 58 were ordered in paint-to-sample colors, and just 19 of these were built for the US. The 2005 Porsche Carrera GT presented here is the sole US car finished in paint-to-sample Polar Silver. It is also highly optioned with a Dark Grey leather interior, and is accented with over $27,000 in exclusive options including carbon fiber trim and red seat belts. Presented in pristine original condition with approximately 2,500 miles from new, this example is accompanied with books, luggage, a hardtop, accessories, and a clean DME report. As one of the most unique and highly optioned Carrera GTs ever offered for public sale, it joins a slate of extremely desirable Porsches at the upcoming Amelia Island Auction.

1993 Porsche 964 Turbo S Leichtbau (Estimate: $1,600,000 – $2,000,000)
Unveiled at the 1992 Geneva Motor Show, the 964 Turbo S Leichtbau made waves as the ultimate Turbocharged 964 model and quickly became one of the most coveted air-cooled cars of the 1990s. Borne out of a mission to offer a lightweight turbocharged model, the Porsche 964 Turbo S Leichtbau drew inspiration from the motor sports champion Brumos Racing Turbo S2. In order to achieve a lightweight Turbo model, Porsche engineers stripped away power windows, power steering, air-conditioning, and rear seats, and instead utilized fiberglass-reinforced carbon composite materials. The result was a car that weighed 2,844 lbs., approximately 430 lbs. less than a standard Turbo.

Of the 86 Turbo S Leichtbau examples built, just 67 were produced in left-hand drive, such as the car presented here. This 1993 Porsche Turbo S Leichtbau is finished in paint-to-sample Sulfur Yellow, a brilliantly dazzling color that has both fluorescent and pastel properties that display uniquely depending on variations in lighting. Only a mere 10 Turbo S Leichtbau examples were specified in a paint-to-sample color, and of these cars, just six were left-hand drive, making the car offered here an incomparably rare combination. Further, this car is the sole example finished in Sulfur Yellow, and is believed to be one of only three Porsches ever produced in this color. This Turbo S Leichtbau was ordered new by the Lippman Brothers in Bremen, Germany, important Porsche collectors of the air-cooled era. In totality, this example has only had two collector owners, and the odometer reads approximately 7,500 Km from new. It comes equipped with a rare factory radio option, as well as a desirable non-airbag steering wheel. Offered from a discerning Porsche collector and complete with books, tools, and accessories, this captivating and rare Turbo S Leichtbau represents an extraordinary auction occasion for devoted enthusiasts.

Mercedes-Benz AMG G65: one of the most powerful 4x4s ever produced 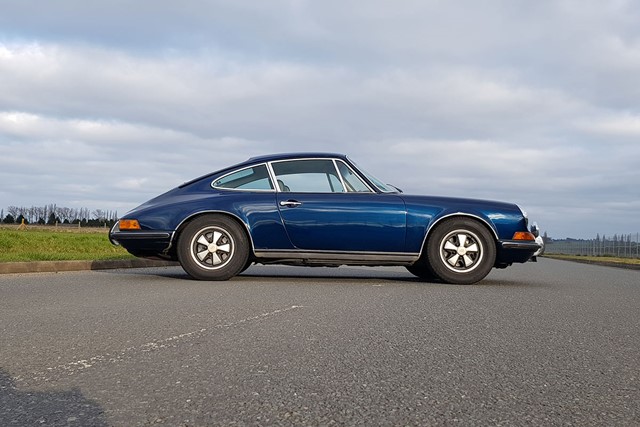