The global auction house concluded its second-ever UK event this weekend, realizing a total of £22,811,938 in sales led by the 1960 Ferrari 250 GT SWB Berlinetta Competizione.

Internationally acclaimed auction house and official partner of the Concours of Elegance, Gooding & Company, conducted its second-ever live sale in the UK this weekend, realizing a total of £22,811,938 million on Saturday, 3 September. The London Auction, conducted on the historic grounds of Hampton Court Palace, resulted in the sale of 31 out of 39 lots, achieving a 79% sell-through rate. Seven cars brought in figures over the £1 million mark, and the average price per lot was £735,869.

The London Auction was led by the sale of the weekend’s star car, a 1960 Ferrari 250 GT SWB Berlinetta Competizione with well-documented period race history, which sold for an astounding £7,762,500. A world record at auction was also set with another Italian masterpiece from the 1960s, a 1965 Alfa Romeo Giulia TZ, which sold for £1,181,250 – the highest price ever achieved for a Giulia. The wonderfully presented Giulia TZ, featuring coachwork by Zagato, came to auction with a known competition history and impressive provenance. Yet another highlight of the three-hour event was the sale of the genuine barn-find 1956 Porsche 550 Spyder, which was offered from over 40 years of single family ownership and sold well above estimate for an incredible £2,025,000. The 1965 Ferrari 275 GTS finished in an elegant color scheme of Bianco over black also sold handsomely, achieving a final figure of £1,350,000.

Gooding & Company had the honor of presenting exceptional Vintage Bentleys from The Timeless Collection, coming to auction from a highly-regarded European collector of prestigious and elegant classics. The top sale of the collection was the 1932 Bentley Eight Litre Sports Saloon, sold for £1,096,875. Also sold was a historic supercar 1932 Bentley Eight Litre Sports Tourer, configured for optimal performance with a short-wheelbase chassis and Le Mans-style tourer coachwork, which achieved £759,375. Additionally, in the realm of prewar classics, the 1932 Bugatti Type 55 Cabriolet, one of the finest examples of the highly sought-after Type 55 extant, yielded a final price of £2,925,000.

The auction house was grateful to partner with Gregor Fisken, the owner of London-based Fiskens LTD, to present his family’s cherished 1987 Citroën 2CV6 Dolly as a charity lot, with the consignor’s sale proceeds set for donation to Voices of Children. The Ukraine-based non-profit organization works to aid children and families affected by the trauma of the war in Ukraine. The Dolly sold for £33,750, and during the auction, the consignor very generously pledged an additional donation of £40,000 to the charity, resulting in over £70,000 to be used towards Voices of Children.

As with any signature Gooding & Company auction, there were several instances of spirited bidding matches in the room, no doubt due to the skillful command of auction maestro Charlie Ross. The celebrated auctioneer expertly conducted the volley of two bidders for a 1939 Jaguar SS100 3 1/2 Litre, which sold considerably above pre-auction estimate for a final figure of £495,000.

“We are incredibly pleased with how our foothold in the UK has been steadily growing, especially with our partnership with the Concours of Elegance, and our second-ever live auction abroad was a great success,” said Gooding & Company President and Founder, David Gooding. “The UK team, led by Charlie Ross and Joe Twyman, did an incredible job, and we achieved quite a number of remarkable sales. We look forward to our return to the UK for our London Auction in 2023.”

Looking Ahead
This November, Gooding & Company will present Geared Online | Bugattiana Automobilia, an online-only auction featuring the vast collection of Bugatti-themed memorabilia from one distinct collector. From November 7-18, over 300 lots of automobilia will be available for bidding via Gooding & Company’s online auction platform, and all lots will be offered without reserve. Interested parties are encouraged to contact Gooding & Company for more details and inquiries on the upcoming auction. 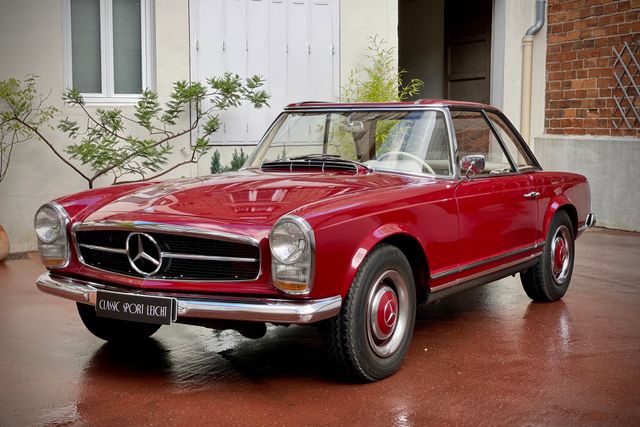