Despatched directly to Donald Healey Garages in 1955 and received a full conversion to ‘M Specification’ before being shipped to its first owner
Period race history in the US and subject to full restoration upon its repatriation to the UK between 2003 and 2005
Still presented in its original colourway of Old English White over Lobelia Blue and retains its original M-specification engine
Mille Miglia registered car, with accompanying paperwork and medallion

Despatched directly to Donald Healey Garages in 1955 and received a full conversion to ‘M Specification’ before being shipped to its first owner
Period race history in the US and subject to full restoration upon its repatriation to the UK between 2003 and 2005
Still presented in its original colourway of Old English White over Lobelia Blue and retains its original M-specification engine
Mille Miglia registered car, with accompanying paperwork and medallion

Donald Healey's eponymous company built a prototype two-seater sports car for display at the 1952 London Motor Show. It was based on Austin A90 Atlantic mechanicals and sported a notably sleek body designed by Gerry Coker and built by Tickford. It was dubbed the 'Healey Hundred' (a moniker chosen to reflect the car's ability to reach the magic 100mph), and, subject to a suitably encouraging response, Healey planned to build production versions in-house at his factory in Warwick. As things transpired, not only did the Ice Blue prototype more than impress the public, but also so excited Austin's Managing Director, Leonard Lord, that he struck a deal to build the car in volume at Longbridge. The newcomer was renamed the Austin-Healey 100/4. The rest, as they say, is history.

The 100/4's chassis was a departure from the company's previous backbone designs and comprised a pair of three-inch square box-section side members running the length of the car, some 17 inches apart. These were braced by parallel and cruciform cross-members to which the steel floor pressings were attached. After the first 25 cars had been constructed at Healey's own premises in Warwick, the production of the mainstream bodyshells was turned over to Jensen. Once complete, the shells were transported to Longbridge, where the Healeys were assembled alongside the A90.

As part of his tireless publicity campaign to promote the newly introduced Austin-Healey 100/4 BN1, Donald Healey entered a team of four pre-production cars for the 1953 Le Mans 24-hour race. Running with standard windscreens, interiors and even bumpers, two of this mildly tweaked quartet survived to finish 12th and 14th overall (an amazing result for such comparatively inexpensive cars in near showroom condition). Eager to capitalize on this success (and also to comply with the event's homologation requirements) Healey persuaded BMC to list a 'Le Mans kit' (twin 1.75 inch SU carburettors, high-lift camshaft, revised distributor advance curve and stronger valve springs etc) in its parts catalogue for 1954. Known officially as part P-280, it was available to fit on new or old models alike, and by dealers or private individuals. Adopted by BMC themselves (together with the addition of a louvred bonnet complete with leather strap), for the 100M version of the BN2 100/4 introduced at the 1955 London Motor Show, it has remained a popular modifications package ever since.

This particular Healey was manufactured in 1955 and dispatched directly to Donald Healey Garages in Warwickshire, where it is believed upon delivery the car was subject to full M-Specification conversion. Subsequently, the car was purchased that same year by a prominent member of St. Louis, Missouri society and senior officer in the Sports Car Club of America, Lester Seasongood. Seasongood was an insurance broker, as well as national secretary of the SCCA, area steward and active competitor; a leading light in motorsport in the period.

2 years later, in 1957, the car was sold to fellow competitor and editor of the St. Louis post, Jim Lawrence, who campaigned the car for a couple of seasons until it was once more sold to a Phil Larson in 1968. Documentary records and films from the period show what a fascinating and vibrant motor racing culture the SCCA engendered. Grids comprised of all the great European and American sportscars of the period, all racing together by enthusiasts, amateurs and professionals alike, with fabulous variety - with Porsche 356s, MG As, Austin Healeys, Chevrolet Corvettes, Ferrari 250 GT TDFs, TR3s….the list goes on and demonstrates what a fascinating cauldron of competitive spirit and legend the SCCA was in the United States in the mid-late 1950s.

In later years, the car returned to the UK, being repatriated in 2001 and between 2003 and 2005 was subject to a comprehensive restoration by the then owner, Mark Barnes. This restoration is photographically documented in an extensive history file, which also details its conversion to right-hand drive, whilst retaining its original colourway of Old English White over Lobelia Blue - one of just 108 cars finished in this colour scheme. ‘890 XUD’ also retains its original specification laminated windscreen and heater, and very importantly, its original engine ‘1B/227475-M’. In addition, the car benefits from a lightened and balanced Denis Welch flywheel; significantly improving throttle response. As well as this, 4 speed gearbox, front disc brakes and servo, new U/J’s, competition clutch and thrust bearing, a lightweight Dynamite alternator, expansion tank and high ratio rear axle.

In current ownership since 2015, this Healey has been well looked after, in 2017 having completed the GP Nuvolari without faults, as well as having been prepared, and importantly, registered for the Mille Miglia with necessary upgrades including a Monit Rally GPS. Included with the vehicle is an impressive history file containing a large collection of previous receipts and invoices, previous race history, photographic history of the restoration, current FIVA identity card, Heritage Certificate confirming the car is a ‘matching numbers’ example and is presented in its original colourway. A copy of the 2011 article in Classic Car Buyer, where the car was road tested, is also included.

Complete with a UK V5C registration, this Healey is ready to be campaigned in the Mille Miglia and other historic circuit events, or simply enjoyed for the vehicle it is by its next custodian. 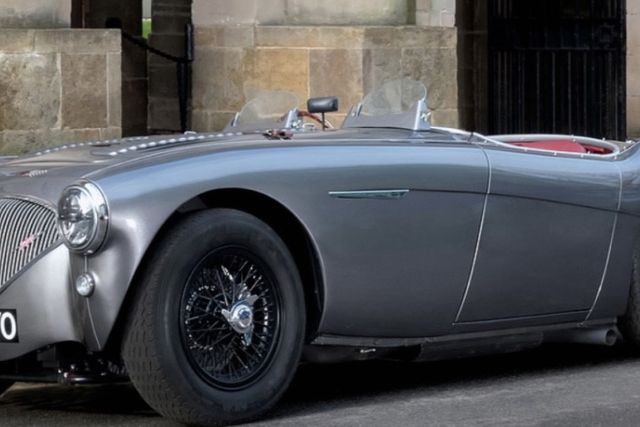