This autumn, Christie’s and EON Productions are delighted to present Sixty Years of James Bond, an official two-part charity sale celebrating the 60th Anniversary of James Bond on the silver screen. Featuring 60 iconic lots spanning the 25 Bond films, proceeds from the live and online auctions will be donated to benefit 45 charities.

The live auction features 25 lots comprising vehicles, watches, costumes and props many of which are related to the 25th Bond film, No Time To Die, with the final six lots offered representing each of the six actors who have played Bond: Sir Sean Connery, George Lazenby, Sir Roger Moore, Timothy Dalton, Pierce Brosnan and Daniel Craig. Headlining the sale is the iconic silver birch Aston Martin ‘DB5’ — the only DB5 stunt car from No Time To Die to be released for public sale. Up for auction in London on 28 September, don’t miss this once-in-a-lifetime opportunity to own a piece of Bond.

Open for bidding between the 15 September until James Bond Day on 5 October, the online sale features 35 lots spanning the 25 films. From posters and props to costumes and experiences, this sale offers one-of-a-kind memorabilia bound to impress fans of the iconic British spy.

"There are few greater synergies in the world of film-making than that between James Bond and the Aston Martin DB5. Aston Martin is part of Bond’s DNA."
Michael G. Wilson, producer

In the film, the DB5 stunt car features in an exciting opening chase sequence, driven by James Bond (Daniel Craig), with Madeleine Swann (Léa Seydoux) at his side, through Matera, Italy. The DB5 stunt car demonstrates its incredible dynamic capabilities as the pair drive at high speed through the town in an attempt to shake off their pursuers. The Matera chase sequence features heavily in No Time To Die, with James Bond deploying the gadget-laden motor’s hidden machine guns

The DB5 stunt car features a modern 3.2-litre straight 6 petrol engine alongside a manual gearbox to maximise the dynamic capability of the stunt car. The body panels are all carbon fibre, while the handcrafted interior has also been made using carbon fibre and features cut down sport Tillett stunt seats. The dash was created through an innovative 3D printing technique, featuring an original DB5 type steering wheel and chronograph dials which are aesthetically sympathetic to an original DB5

The DB5 stunt car suspension and braking system are completely bespoke and were uniquely engineered by Aston Martin Special Projects. Guided by special effects supervisor Chris Corbould with regard to what was expected of the car on set, the Aston Martin Special Projects team then developed a completely new suspension and braking system which made the car capable of its incredible stunt performances.

This vehicle was built specifically to perform dynamic stunts during the filming of No Time To Die. 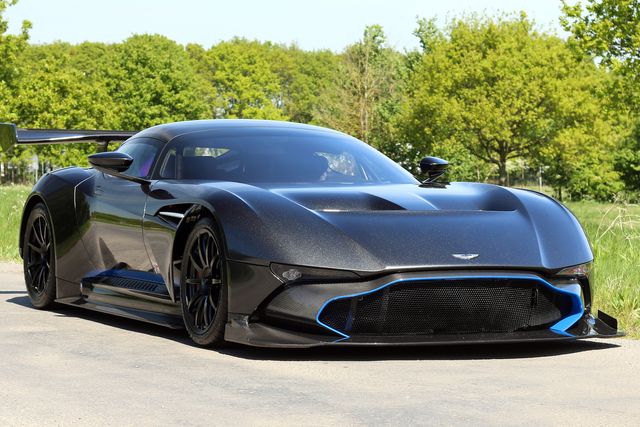