An Aston Martin DB5 replica stunt car featured in No Time To Die (2021) has raised £2,922,000 for good causes in a charity auction at Christie’s to celebrate 60 years of the James Bond films.

One of three special Aston Martin models included in the multi-million-pound charity auction, the replica DB5 donated by Aston Martin Lagonda was the star lot on the night, accelerating beyond the auctioneer’s estimate before being sold to a telephone bidder.

This stunt car is one of eight exclusively built and engineered by Aston Martin for No Time To Die, with each car uniquely modified for their individual role on screen. The replica stunt DB5 car sold at Christie’s features operational gadgets including a rotating digital numberplate, retractable headlights, pop-out machine guns and firing prop bomblets.

In the film, the DB5 features in a thrilling opening chase sequence, driven by James Bond (Daniel Craig), with Madeleine Swann (Léa Seydoux) at his side, through Matera, Italy. The car demonstrates its incredible dynamic capabilities as the pair drive at high speed through the town to shake off their pursuers before Bond deploys the hidden machine guns.

Marek Reichman, Executive Vice President and Chief Creative Officer of Aston Martin said: “Aston Martin is incredibly proud to be part of James Bond’s DNA and we are delighted to celebrate this 60th anniversary with the sale of a truly unique Aston Martin model that we created for No Time To Die. It is fantastic that the sale of this special car will now hugely benefit several good causes which are close to our heart, playing our own part in the long-standing tradition of the James Bond franchise supporting charitable causes.”

Attended by Bond Actors Dali Benssalah and Samantha Bond, the auction also saw the sale of a 1981 Aston Martin V8 which was driven by Daniel Craig as James Bond in No Time To Die.  The iconic model, which was the fastest four-seat production car of its day and Britain’s first true ‘supercar’, is similar to that used in the 1987 Bond film, The Living Daylights.

Donated by EON Productions, the Aston Martin V8 fetched £630,000 to support the work of UNHCR, the UN Refugee Agency.

The auction also saw the sale of an Aston Martin DBS Superleggera 007 Edition, one of 25 examples created by Aston Martin to celebrate the car’s inclusion in No Time To Die. Featuring a unique plaque with etched signatures from producers Michael G. Wilson and Barbara Broccoli and actor Lashana Lynch, who drove the same Aston Martin model as Nomi in the film, the car raised £403,200 to support the Royal Foundation of The Prince and Princess of Wales.

The live auction featured 25 lots comprising vehicles, watches, costumes and props many of which relate to the 25th Bond film, No Time To Die, with the final six lots offered representing each of the six actors who have played Bond. An online sale featuring 35 lots spanning the 25 films, continues until James Bond Day on 5 October 2022 – the 60th anniversary of the world premiere of the first James Bond film Dr. No in 1962. 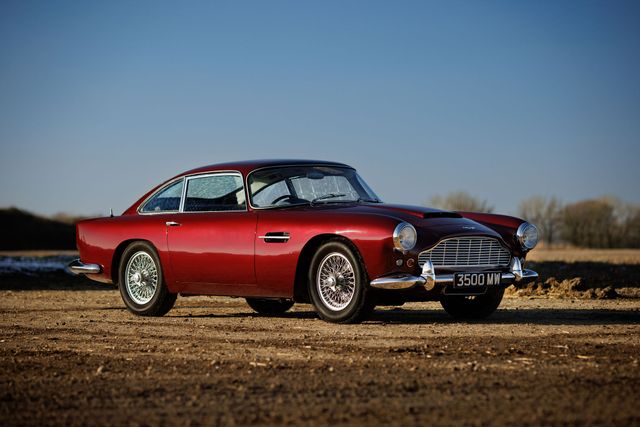