One of the world’s most famous E-Type Jaguars, Boycie’s’ Series 3 Roadster from the unforgettable ‘Go West Young Man’ episode of ‘Only Fools and Horses’, will star in Hampson Auctions’ final classic vehicle sale of 2022, November 29, Mavericks, Holywell, North Wales.

Yes, ‘UYP 694M is the very car that the famously dotty duo of Del Boy and Rodney ‘borrowed’ from their moustachioed car-dealing friend Boycie for a trip up to London’s West End - and inevitably crashed - in Series 1, Episode 2 of the BBC’s hit sitcom. Happily though, the accident was staged and no E-Types were damaged in the process! Indeed, this particular two-owner roadster appears to have led a relatively quiet life aside of its brief spell as a TV star. First registered in November 1973, it is a home market model that’s finished in Old English White, trimmed in blue leather and rides on period correct chrome wire wheels. The odometer currently registers a modest 80,075 miles from new, and the vendor considers its V12 engine, automatic transmission, bodywork, paintwork and upholstery to all be in ‘good’ order.

As you might imagine, this star car is accompanied by a host of TV-related memorabilia, including a number of videos, signed photographs and even a scale model of the Jaguar autographed by Del Boy (Sir David Jason) and Boycie (the late John Challis), while the underside of the car’s bootlid also carries Boycie’s moniker. The guide price for the E-Type is £140,000 to £160,000. Lovely Jubbly as Del Boy would have said!

The November 29 auction will be Hampson’s second at Mavericks, North Wales’ mecca for classic car and motorcycle owners. The first won many plaudits and achieved an impressive sale rate of over 70 percent. Commented Hampson’s Managing Director Zach Hamilton: “We’ve had a good year and are delighted to have settled on Mavericks as the venue for all our upcoming sales, with the exception of our regular blue riband auction at the Oulton Park Gold Cup race meeting.” 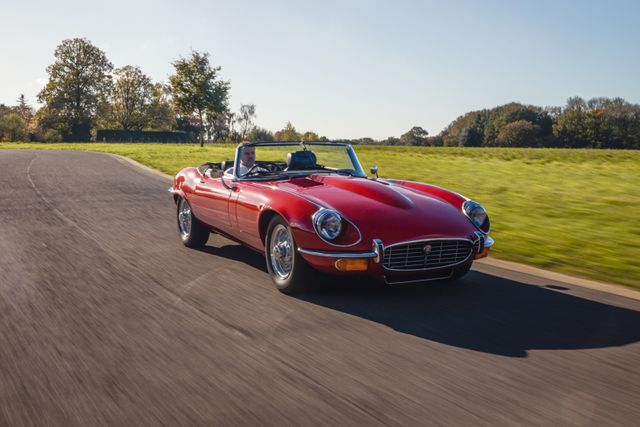