This Chevrolet Corvette GTP is the final of seven prototype race cars built by Lola Cars Limited and developed by General Motors between 1984 and 1988 for GM’s factory campaign in the IMSA GT Championship, and it is one of two examples designed for V8 power. Chassis T8811-HU01 was delivered new in May 1988 to Peerless Racing, who campaigned it as a privateer entry during the 1988 and 1989 IMSA seasons with David Hobbs, Jack Baldwin, Jacques Villeneuve, and Scott Goodyear at the wheel. The car was then developed by Paul Canary Racing as the Eagle 700 for entry in the 1990 24 Hours of Le Mans, where it attempted to qualify with power from a quad-cam, 32-valve Eagle Performance 10.2-liter Chevrolet V8. After its retirement from racing, the car remained with one owner between 1991 and 2019 and was acquired by the selling dealer in 2020. Featuring shorttail bodywork finished in red and white IMSA Budweiser livery, the car retains the Eagle powerplant that propelled it at Le Mans along with a Hewland VGC five-speed manual transaxle. Additional equipment includes Haltech electronic fuel injection, twin oil coolers, ventilated and cross-drilled brakes, staggered-width 17” BBS basketweave wheels, coilover suspension with a pushrod front arrangement, and a single seat upholstered in black cloth. This Corvette GTP is now offered in Malle, Belgium, with 1991 correspondence from Lola regarding the chassis plate, a copy of Alex Gabbard’s Corvette GTP, a spare nose segment and alloy block, a computer for ignition setup, and a bill of sale.

Development of the Corvette GTP began in the early 1980s as General Motors resurrected its factory racing presence with an initiative to promote and evolve its turbocharged V6 engine platform. Lola was contracted by GM to manufacture a series of aluminum honeycomb monocoque chassis, which were subsequently outfitted with Kevlar bodywork that underwent various iterations between 1984 and 1988. The nose panel was inspired by the production Corvette C4, while C4 taillights were positioned at the back of both long- and shorttail versions of the GTP platform’s rear panel.

This example was converted to shorttail rear bodywork midway through its six-race IMSA career with Peerless Racing and retained the same configuration during its unrealized bid for qualification at Le Mans. The body wears the red and white paint scheme it carried at Le Mans and has been fitted with decals recreating the number 76 Budweiser livery under which it competed during its first season with Peerless Racing. Features include a dual-element rear wing, front flicks, fender louvers, a roof-mounted intake vent, side inlets feeding air across dual radiators, and snorkels for rear brake cooling.

Multipiece center-lock BBS wheels are wrapped in older Goodyear Eagle racing slicks measuring 25.5/12.0-17 at one front corner and 28.5/14.5-17 at the rear. A Pirelli P Zero tire is mounted on one of the front wheels, and sidewall cracking is visible. The braking system incorporates dual master cylinders with adjustable bias, ventilated and cross-drilled rotors, finned AP Racing calipers, and cooling ducts.

A bucket seat trimmed in black cloth is situated at the right-hand side of the cockpit beside a sill-mounted shifter. Safety equipment includes a roll cage, a blue restraint harness, and a Lifeline fire-suppression system.

The mid-mounted 10.2-liter V8 was built by Eagle Performance based on a big-block Chevrolet powerplant and features dual overhead camshafts on each cylinder bank with four valves per cylinder. Additional features include electronic fuel injection, direct-fire ignition, twin oil coolers, twin radiators, and an axle-driven alternator.

Images of the car during its racing career can be seen in an included copy of Alex Gabbard’s Corvette GTP, which also includes a discussion of the car from those involved in its development and history. The car’s rear panel features decals with signatures of drivers Jacques Villeneuve, Jack Baldwin, and David Hobbs. Decals from the 1990 Le Mans 24 Hours are also retained on the car. Parts and accessories accompanying the car include a computer for ignition setup, an alloy engine block, and a nose-section mold. 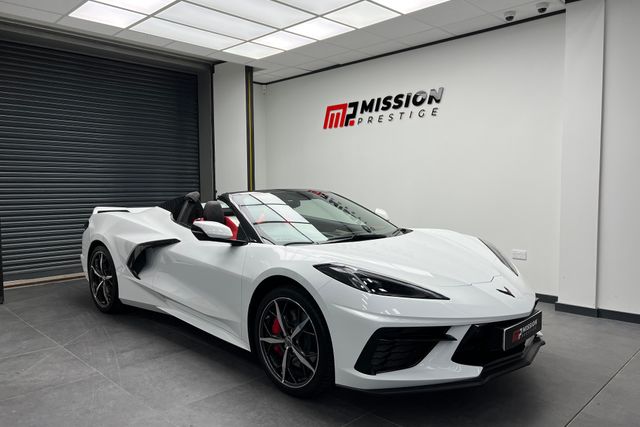