Werner on pole for Spa 24 hours 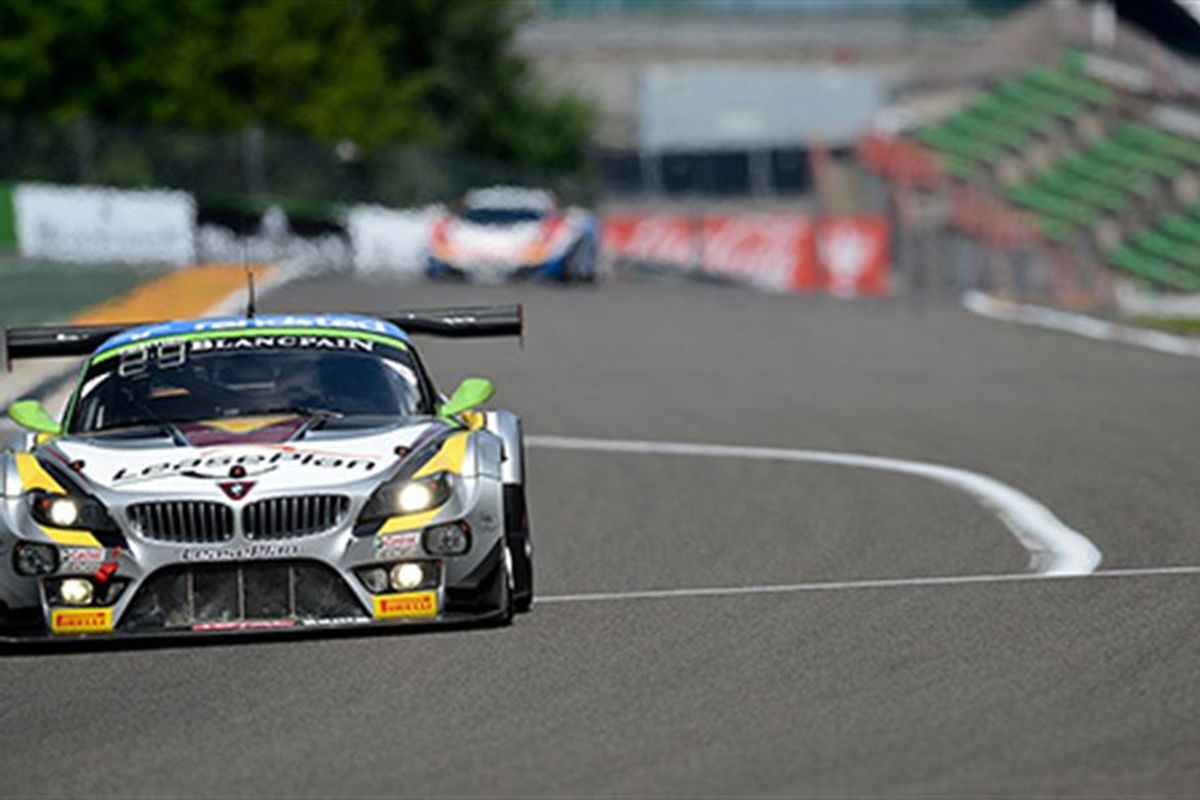 The sound of this S65 V8 Z4....fantastic - video below of car running at the 'Ring last year - why don't BMW make a road version of this car?

Last night's two 75-minute qualifying sessions determined the twenty cars which will take part in Friday’s Superpole of the 2014 Total 24 Hours of Spa. Dirk Werner in the #77 BMW Sports Trophy Team Marc VDS BMW set the quickest time in the opening minutes of the first qualifying session, with 13 cars lapping within the same second. Alessandro Pier Guidi, driving the #50 AF Corse Ferrari, was quickest in Pro-Am and fourth overall, while Stéphane Lemeret in the #228 Delahaye Racing Porsche was fastest Gentlemen Trophy driver.

With Alvaro Parente – three front rows in the three Blancpain Endurance Series races of 2014 – absent for the qualifying practices, due to the crash of the #98 ART Grand Prix McLaren in free practice, the battle for the top positions was wide open. The opening minutes of the first qualifying session saw some frantic action, with plenty of drivers going quicker than last year’s pole position of Aston Martin-driver Stefan Mücke. Eventually twelve cars went below the 2’20 barrier in the first qualifying session, with Dirk Werner in the #77 BMW Sports Trophy Team Marc VDS BMW being the quickest overall in 2’19.089.

Behind the BMW factory driver, Christopher Mies in the #3 Belgian Audi Club Team WRT Audi was only 0.041 slower, with Kevin Estre in the #99 ART Grand Prix McLaren 0.159 behind the BMW. In fourth was the quickest of the Pro-Am cars, the #50 AF Corse Ferrari, with Alessandro Pier Guidi at the wheel.

With conditions in the night qualifying session slightly deteriorating, no one managed to improve and that meant the top-20 of the first qualifying session proved to be the final ranking as well. Four cars of the Pro Cup did not manage to get into Friday’s Superpole: the #63 Black Falcon Mercedes (21st and only 0.044 short to claim a Superpole spot), the #75 ISR Audi (29th), the #44 Oman Racing Team Aston Martin (37th) and the #8 M-Sport Bentley (39th).

Stephane Lemeret in the #228 Delahaye Racing Porsche set the quickest time in the Gentlemen Trophy, lapping the Ardennes circuit in 2’22.894 just before the chequered flag of the first session was waved. The Belgian will start from 49th on Saturday afternoon. The Superpole session, giving one driver of each car in the top-20 the opportunity to do two timed laps, will start on Friday at 18.50.

Dirk Werner (#77 BMW Sports Trophy Team Marc VDS BMW): “I am happy for the team that I was able to set this provisional pole. We were able to determine a good set-up, at least over a single lap. Still, this is only provisional, there is still the Superpole left. Getting the pole will not change a lot for the race itself, but it is always a good thing if you can start from the front and avoid possible mayhem during the opening laps.”

Christopher Mies (#3 Belgian Audi Club Team WRT Audi): “My lap was quite good, but I caught some traffic at the end. I hope I can go a bit quicker during Superpole, even though I think it will be tough to get into the 2’18s, especially since we will have to cope with hotter conditions on Friday evening.”

Kevin Estre (#99 ART Grand Prix McLaren): “We certainly did not want to make any mistake, because the team’s mechanics already have their hands full in repairing the #98 car. We had to work hard to find a right set-up, but in the end all pieces came together. I hope this will give our mechanics some extra motivation, because I am certain they will have a long night ahead of them.”

Alessandro Pier Guidi (#50 AF Corse Ferrari, 1st Pro-Am): “It will be difficult to be on the front row like we did last year, but I will certainly have a go. We had our share of problems today, but the crew gave me a fantastic car for qualifying. Still, beating the BMW and Audi will be hard thing to do.”

Stéphane Lemeret (#228 Delahaye Racing Porsche, 1st Gentlemen Trophy): “I had to put quite some effort in taking the Gentlemen Trophy, because I had quite some difficulties in getting through the traffic. But I really wanted to get on pole, because that would allow me to get into the official press conference and get some attention from the journalists for our efforts.”