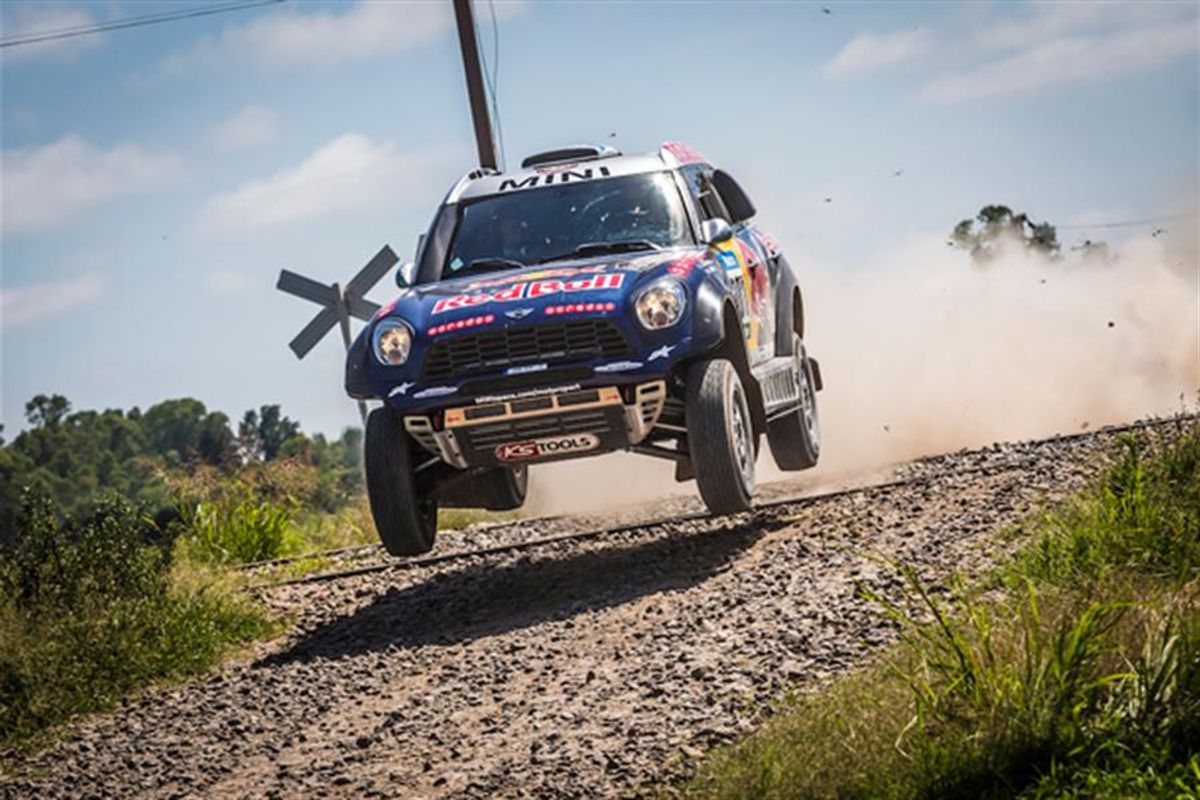 - takes the lead in the overall classificationFive MINI ALL4 Racing in the top ten.‏

Nasser Al-Attiyah (QT) and his co-driver Mathieu Baumel (FR) in the MINI ALL4 Racing have won stage two of the 2015 Dakar Rally. On leg two the drivers had to cover 625 kilometres from Villa Carlos Paz (AR) to San Juan (AR), including the longest stage of the whole event with a total of 518 kilometres.

“That was a good run,” Al-Attiyah said after crossing the finish line. “It was the longest stage of the whole rally so it was not an easy one. Quite tough to be honest. We have to keep going like this, then we can maybe win the Dakar.”

The stage was extremely challenging and a great preparation for the demanding stages to come at the toughest event in motorsports. The first half of the stage was held on hard soil across dried out riverbeds followed by lose gravel and sandy sections. Right before the finish line in San Juan the drivers had to tackle some tricky sand dunes.

The Argentinean duo Orlando Terranova/Bernardo Graue in the MINI ALL4 Racing was quick at most of the checkpoints at today’s stage. However, they lost over 22 minutes due to a crash right before the end of the stage. They are now in tenth place overall.

“We rolled four times,” Terranova said. “Afterwards, we lost quite a lot of time as we had to repair the tyres and the fuel pump. But we made it to the finish and now we have to battle on.”

Joan “Nani” Roma (ES) and his co-driver Michel Périn (FR) were able to continue after having technical problems on the first stage of the event yesterday. Their mechanics took a night shift and fixed the problem. The Spanish-French duo is still in the race.

“At first I have to thank the team that did a fantastic job, tonight,” Roma said. “They revised the entire engine – just crazy. But the special stage was tough. Over the first 300 kilometres I only was driving in the dust of many other competitors. I have to admit that it’s anything but easy to cope with such a setback at the very beginning of the Dakar but we will keep on fighting and try to achieve the maximum.”

MINI was still going strong today, scoring three more top ten positions: Krzysztof Holowczyc/Xavier Panseri (PL/FR) is still lying in fourth position overall, despite seasickness: “It was a very tough special stage. We had a good pace over the first 450 kilometres. We pushed, but not too hard,” Holowczyc revealed. “But the final 50 kilometres were horrible for me. It was up and down all the time and I got seasick. Over the final 30 kilometres I only dreamed about finally crossing the finish line.”

Vladimir Vasilyev/Konstantin Zhiltsov (RU/RU) made up a lot of ground today and are now in a promising fifth position overall. Erik van Loon/Wouter Rosegaar (NL/NL) are currently in a strong seventh position.

Leg 3 (San Juan/Chilecito) on Tuesday will be held up in the Argentinean mountains. The 284 kilometre long special stage will be shorter and less intense, which allows the drivers to enjoy the impressive surroundings. The participants will pass majestic peaks and deep canyons on twisty gravel roads at up to 3,500 metres altitude and drive through one of the most beautiful regions of Argentina. The high altitude is going to be a real challenge for drivers and cars alike.