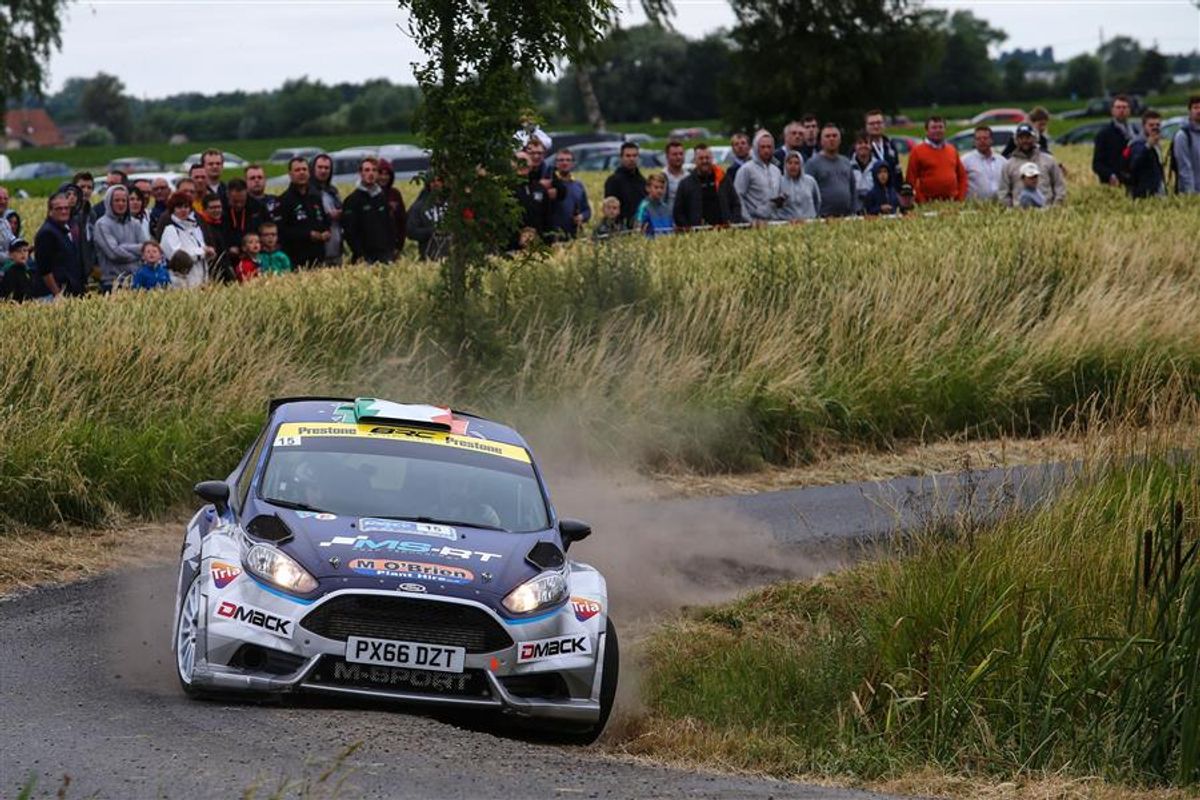 The Prestone MSA British Rally Championship races across the Irish Sea for the penultimate event of the series with the legendary Ulster Rally the next stop on the action-packed calendar. The championship’s only visit to Northern Ireland in 2017 will see Britain’s premier rallying series tackle the two-day, closed road Tarmac event on the 18/19 August.

The British Rally Championship returns to Derry/Londonderry for the 2017 Ulster Rally – round six of the exciting rallying series. Not only is the BRC reaching its end of season crescendo, but also the British crews will go toe-to-toe with the best from the Irish Tarmac Championship – providing an added challenge in the quest for overall victory.

The Ulster Rally will get underway with a Ceremonial Start in the heart of the Walled City, with crews being waved off into the 135-mile event under the shadow of the Guildhall on Friday lunchtime. In between the stages, competitors will visit the rally Service Park at Ebrington Square several times throughout the event allowing engineers and mechanics to work on the state-of-the-art rally cars and repairing any damage experienced on the challenging route.

The BRC competitors will contest 14 timed stages through the bumpy narrow lanes, with competitive speeds at times north of 100mph – the classic event offers a real test to the country’s top rally drivers. Throw in the extra difficulty of changeable Irish weather conditions and stages are there to be tamed by the brave and equally ready to claim the unwary.

For those successful enough to make it to the end of the event on the podium, will be spraying the champagne on Saturday afternoon at Ebrington Square, with the Peace Bridge and city skyline providing the dramatic backdrop to the celebrations.

All of this adds up to one exciting weekend of motor sport action with a large crowd expected. Highlights from the rally will be broadcast around the world via Channel 4, BT Sport and Motorsport TV network shortly afterwards.

Two rounds ago the Prestone MSA British Rally Championship visited Ypres in Belgium for the first overseas round in the championship’s 59-year history and the event certainly didn’t disappoint. From the slippery cobbles and shiny asphalt in northern Belgium, the BRC teams had just two weeks to return to their bases, turn the cars from Tarmac trim to gravel specification before traveling to round five, the Nicky Grist Stages in Builth Wells, Wales. The Nicky Grist Stages is unique as drivers tackled eight dusty gravel stages on the opening day before switching back to Tarmac for another 12 stages over the asphalt roads through the Epynt Ranges.

Osian Pryce and Dale Furniss (Ford Fiesta R5) led for most of their home event and were set to become the fourth different winner this season, but on stage 12 the Welsh pairing suffered a high-pressure fuel pump failure. The same corner on the famous Epynt Military Ranges claimed another championship protagonist as three-time BRC Champion Keith Cronin and navigator Mikie Galvin (Ford Fiesta R5) carried to much speed into the bend, resulting in the Irish crew rolling out of the event.

Keeping clear of all of the drama was Swedish star Fredrik Ahlin and his Norwegian co-driver Torstein Eriksen. The Scandinavian pairing put the preasure on Pryce all event and were primed and ready to pounce once the Welshman was left stranded on the road-side. The Skoda Fabia R5 crew made it a hat-trick of wins this season and now sit pretty at the top of the points table heading to Ireland.

Matt Edwards is a man building momentum this season, as the Welshman now has two second place finishes to his name from Ypres and the Nicky Grist. The Welshman returns to the scene where he made his R5 debut last year and the Ford Fiesta driver could be a dark horse for this year’s championship as the season heads to its climax.

Rhys Yates became the eighth different driver to spray the champagne this season as he took a fine third overall on the Nicky Grist Stages – narrowly fending off Tarmac ace Marty McCormack who was in Alastair Fisher’s Fiesta for the weekend – keeping his championship aspirations alive.

In the Cadet Cup, Alex Waterman notched-up his first victory of 2017. This kept him in the hunt for the championship title and denied championship leader Josh Cornwell the chance to wrap up the title early, taking the battle to the Ulster Rally.

David White can almost put one hand on the BRC4 trophy following a win in Wales while BRC newcomer William Hill showed great pace in his Ford Fiesta to take the National Rally Cup victory.

Welshman Elfyn Evans claimed the 2016 BRC title on last year’s Ulster Rally, taking his third BRC win in row. With home pride dented, Irish crews will be throwing everything at the event to restore Irish honour and claim a local win on home soil.

Keith Cronin (Cork) and Mikie Galvin (Killarney) have already made history this season by taking maximum BRC points on the Ypres Rally – the first overseas round in the British Rally Championship’s 59-year history. The M-Sport pairing sit fourth in the overall standings and will hope to secure their second victory this season in the Ford Fiesta R5, thus elevating them up the championship order heading to the season finale on the Isle of Man.

Eager to lift the trophy and take a popular home win will be Marty McCormack (Maghera) and David Moyinhan (Kesh). The pair experienced a high-speed off on the slippery Tarmac of Ypres in their Skoda Fabia R5. The Czech machine has now been rebuilt – ready for the crew to tackle their local event. With the Nicky Grist Stages just two weeks after Ypres, McCormack hired a Fiesta R5 and finished fourth to keep his championship aspirations well and truly alive coming into the Ulster.

Desi Henry (Portglenone) and Liam Moynihan (Cork) have had a season to forget in 2017 with the Fabia R5 crew’s best and only finish to date coming on the Scottish Rally with a fifth overall. Henry was running in a promising second in Ypres until a roll into a field saw him drop too much time to continue. Electing to miss the Nicky Grist Stages to get his Skoda straight and on song, Desi and Liam will be gunning for their first podium this year as they aim to become the ninth different crew to taste champagne this season.

Another crew who have also not had any luck this season is Jonny Greer (Belfast) and Scottish co-driver Kirsty Riddick. The pair finished third in the competitive championship last season but 2017 has seen little in reward for the Citroen DS3 R5 crew. Greer claimed a fine second to Elfyn Evans in Ulster last year and will be keen to repeat the feat and show his worth on his home event.

On the recent Ypres Rally and Nicky Grist Stages, Callum Devine (Feeny) and Keith Moriarty (Limerick) in their Opel ADAM R2 have been untouchable in the Junior BRC with dominant wins in Belgium and Wales to bring them to the summit of the points standings.

Standing equal with Devine and Moriarty and the top of the table is William Creighton (Moira) and co-driver Liam Regan (Belfast). The Peugeot 208 R2 pairing won the second round, the Pirelli International Rally, and have backed up that breakthrough win with podiums in Scotland, Belgium and Wales to put them right in the mix for the championship fight.

Marty Gallagher (Letterkenny) and Dean O’Sullivan (Convoy) have shown strong pace all season on all surfaces and are within touching distance of an outright class win. The Peugeot 208 R2 team secured a third in Scotland and with a good haul of points from the other four rounds, watch this local crew as they fly through the lanes in pursuit of becoming the fifth different winner in the front-wheel-drive category this season.

18-year-old Josh McErlean is the youngest competitor in the series but the man from Kilrea is not letting his tender age get in the way of performance on the stages. The young-gun started the season in his own Citroen C2 R2 and the Northern Irishman showed flashes of brilliance in the French pocket-rocket. His pace was noticed by leading Junior BRC team MH Motorsport, who gave McErlean a chance to pilot a state-of-the-art Ford Fiesta R2T for the Nicky Grist Stages. After a disappointing retirement from a potential podium position, Josh returns with the nimble C2 as they go in search for a strong finish on home soil.