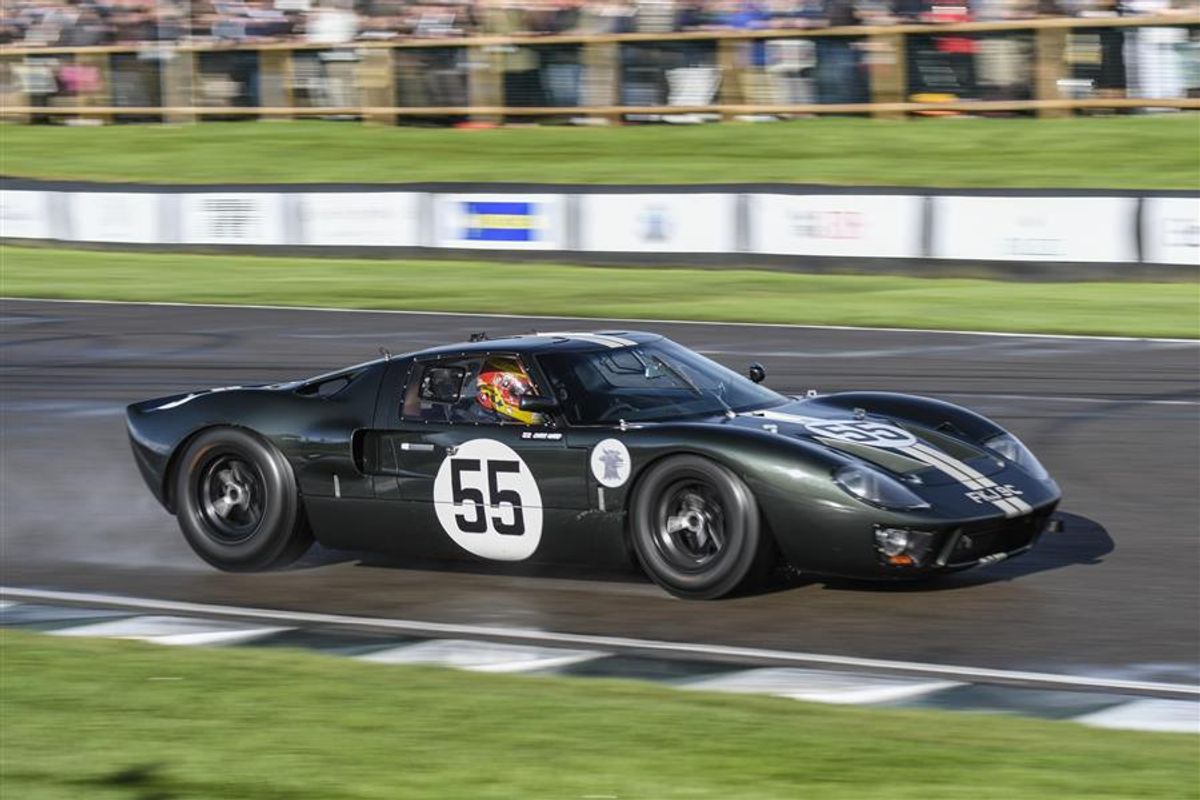 JD Classics took a win and two second-place finishes at the legendary Goodwood Revival, including an incredible last-to-first finish in the Freddie March Memorial, subsequently demoted to second
The JD Classics Historic Racing Department took victory in the Whitsun Trophy, in a Ford GT40

The team’s Lightweight E-Type just missed its third consecutive RAC TT Celebration victory, finishing second after a 30-second penalty
A main sponsor of the Goodwood Revival for the third year, JD Classics was racing or displaying eight cars over the weekend

JD Classics won one race and secured two second-place finishes during the world-famous Goodwood Revival over the weekend, including a spectacular last-to-first in the Freddie March Memorial Trophy, only to be given a five-second penalty to finish second. A major sponsor for the third consecutive year, JD Classics also took victory in the Whitsun Trophy and second place in the RAC TT Celebration.

In the Whitsun Trophy – a race for pre-1966 sports car prototypes – JD Classics fielded a GT40 with Chris Ward at the wheel. Ward struggled to find space on the track during the wet qualifying session but managed to set one flying lap, good enough for second on the grid. Just before the session ended, though, two fellow GT40s set blistering times, forcing Ward back into fourth.

A penalty for one of the cars promoted the JD Classics car to third for the race, and during the first lap Ward had managed to make up one place, to begin chasing down the lead GT40. Soon after, a safety car bunched up the field before getting the race underway again with just 0.6 seconds splitting the JD Classics car and the leader. A few laps later Ward managed to power into the lead on the home straight to take a narrow lead. A spin by the chasing GT40 gave Ward a six-second lead, which he held onto for victory.

JD Classics was contesting the Freddie March Memorial in a Cooper T33, with Chris Ward once again at the wheel – a combination that won this race at Goodwood back in 2015. Despite heavy rain and plenty of standing water, Ward managed to drive the Cooper T33 to pole position by more than a second but a technical infringement meant it had to start the race from the very back of the grid.

Ward and the Cooper T33 were in their element as the race began, making up more than 14 places on the 28-strong grid by the end of the very first lap. Just four laps later, and with Ward continuing his charge, the Cooper was up to second but faced a stiff challenge in the leading Aston Martin DB3. In fact, it wasn’t until the first corner of the final lap that Ward managed to pass, holding off the DB3 to the chequered flag to take victory by just 0.2 seconds. A five-second penalty demoted the JD Classics Cooper T33 to second place.

In the RAC TT Celebration – perhaps the most hotly contested race of the Goodwood Revival – JD Classics was chasing a third consecutive victory, having won here in 2015 and 2016. With the same driver pairing of Chris Ward and Gordon Shedden driving the E-Type ‘1196 WK’, qualifying went exactly to plan, with Ward and Shedden tussling for pole position with a Ferrari 250 GTO. By the end of the session, Shedden had secured pole by just 0.038 seconds on the last lap.

Ward was first behind the wheel of the E-Type Lightweight in the race, but got bogged down at the start and slipped to fifth position, allowing one of the powerful AC Cobras into the lead. Ward fought his way back to second over the next couple of laps before running wide at St Mary’s and slipping back to fourth. Another few laps later, Ward was side-by-side with the second-placed Cobra lap after lap before the two cars eventually touched, causing the Cobra to spin.

Ward now had just 1.6 seconds to the leader, another Cobra, but with 40 minutes of the race remaining the JD Classics team called Ward into the pits to hand the drive to Gordon Shedden. The E-Type rejoined the race in second, chasing down the lead Cobra, which began to suffer mechanical issues and was forced to retire. Now in first place, Shedden extended his lead to cross the line first, before being handed a 30-second penalty for his earlier race contact with the Cobra of Andrew Smith and Ollie Bryant. Shedden, Ward and the E-Type were demoted to second place with the penalty applied.

In the Madgwick Trophy, JD Classics were supporting only the second competitive entry for the team’s Lister Maserati, driven by Nick Riley on his debut at Goodwood. It was another wet qualifying session, but the Lister Maserati drove consistently to end up 18th on the grid. During the dry race, Riley was able to push the car harder, gaining five places in the process to finish in an impressive 13th position.

Qualifying for the St Mary’s Trophy takes place over two sessions, with JD Classics competing in a Jaguar Mk VII saloon. Wet conditions and a number of spins and stranded cars made both sessions tricky but the Mk VII, piloted by JD Classics founder Derek Hood, avoided the chaos to qualify 25th during each. A fuel pick up problem in the fuel tank in the first of the St Mary’s Trophy races forced the Mk VII to retire but it was back again for race two, gaining places to cross the line in 22nd.

JD Classics founder, Derek Hood, said: “This is our third consecutive year as a major sponsor of perhaps the world’s finest classic motorsport event, and yet another year of brilliant results for us at Revival. I’m extremely proud of our two wins, and the efforts of the JD Classics Historic Racing Department – it was a truly world-class display. We narrowly missed out on a third consecutive RAC TT victory with our E-Type ‘1196’ but with the incredibly high standards of racing at Revival, nothing is a given.”