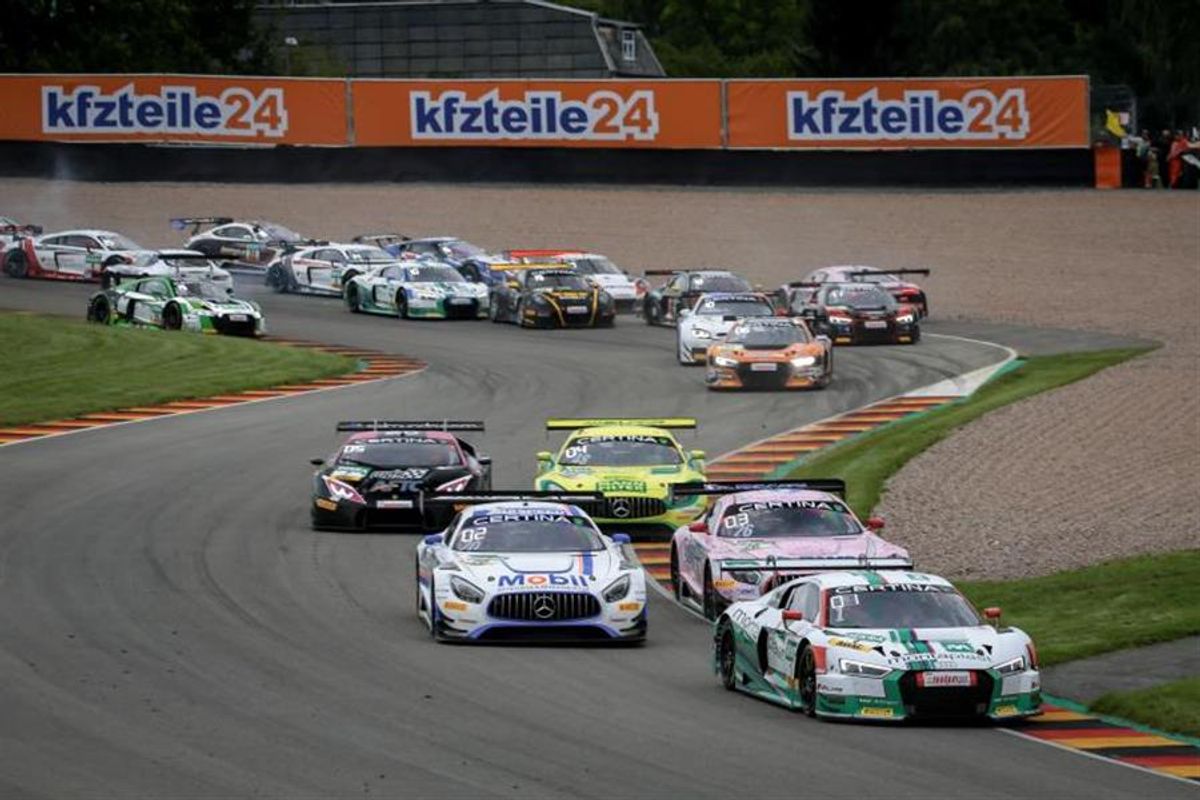 with win at Sachsenring

The Audi duo of Connor De Phillippi (24, USA) and Christopher Mies (28, DEU, both Montaplast by Land Motorsport) were totally dominant in the eleventh round of the 2017 ADAC GT Masters staged at the Sachsenring, pulling off a lights-to-flag victory. This second win of the campaign keeps them in with a chance of successfully defending their title in the Super Sports Car League. The other podium places went to two Mercedes AMG teams - Nicolai Sylvest (20, DK) and Yelmer Buurman (30, NL, both Mercedes-AMG Team ZAKSPEED) in the runner-up spot and Indy Dontje (24, NL) and Marvin Kirchhöfer (23, DEU, both Mercedes-AMG Team HTP Motorsport) in third. "We're back where we belong," said a jubilant Mies. "I'm so pleased for the whole team. They have worked very hard to make this success possible."

Pole-sitter de Phillippi successfully defended his lead at the start. Meanwhile Mercedes-AMG driver Nicolai Sylvest moved up into second place and began to put the Audi under pressure. In a thrilling battle at the front, De Phillippi and Sylvest had pulled out a lead of more than ten seconds over the rest of the field by the time the pit stop window opened. De Phillippi's partner Christopher Mies dominated proceedings after the driver handover. The Audi man extended his lead over Yelmer Buurman, who had taken over from Sylvest, to more than three seconds at times. A late safety car deployment to enable the recovery of the Audi retired by Patric Niederhauser (25, CH, Aust Motorsport) caused the field to bunch up together again, but after that, Mies was able to comfortably secure the ninth ADAC GT Masters win of his career. With this start-to-finish victory, De Phillippi and Mies have moved up to third place in the championship table on 96 points, keeping alive their hopes of a successful title defence, as they are only 33 points behind current leader Jules Gounon (22, FRA, Callaway Competition) with three races still to be run.

Sylvest and Buurman were eventually beaten by the slender margin of 0.9 seconds. It was the first podium of the season for the number 20 Mercedes-AMG and the first win of the year for Sylvest in the Junior stakes. To the delight of local fans, their hero Marvin Kirchhöfer (23, DEU) in another Mercedes AMG made it onto the podium together with team mate Indy Dontje (24, NL, both Mercedes-AMG Team HTP Motorsport).

A P4 finish for Philipp Eng (27, AUT, BMW Team Schnitzer), who shares the only BMW M6 in the field with Nick Catsburg (29, NL), secured ten points in the fight for the title. The Austrian is now 28 points down on championship leader Jules Gounon, who came home in ninth place along with team-mate Renger van der Zande (31, NL, both Callaway Competition). Partnering each other for the first time, Kelvin van der Linde (21, ZA) and his younger brother Sheldon (18, ZA, both Aust Motorsport) were fifth in their Audi R8. Kelvin van der Linde currently ranks fourth in the standings, and so he too managed to keep his title ambitions alive.

Connor De Phillippi (Montaplast by Land-Motorsport, Audi R8 LMS): "The race went well. We started from pole position and didn't make any mistakes. By the time we came into the pits, we had already established a small lead. The driver change went according to plan. Chris then drove very well, and it was only when the safety car came out towards the end that the situation became tighter. The race tomorrow should be another exciting one. But I'm confident that Chris will do a job just as good again and that we will be scoring more points. Hopefully, we'll make it into the Top Five."

Christopher Mies (Montaplast by Land-Motorsport, Audi R8 LMS): "It was a good race. After the change of driver, I went out onto the track as race leader with a gap of about two seconds. After that, I had bad luck with the traffic and I picked up some dirt on my tyres, as a result of which I lost time. Fortunately, the safety car came out, which allowed the tyres to recover."