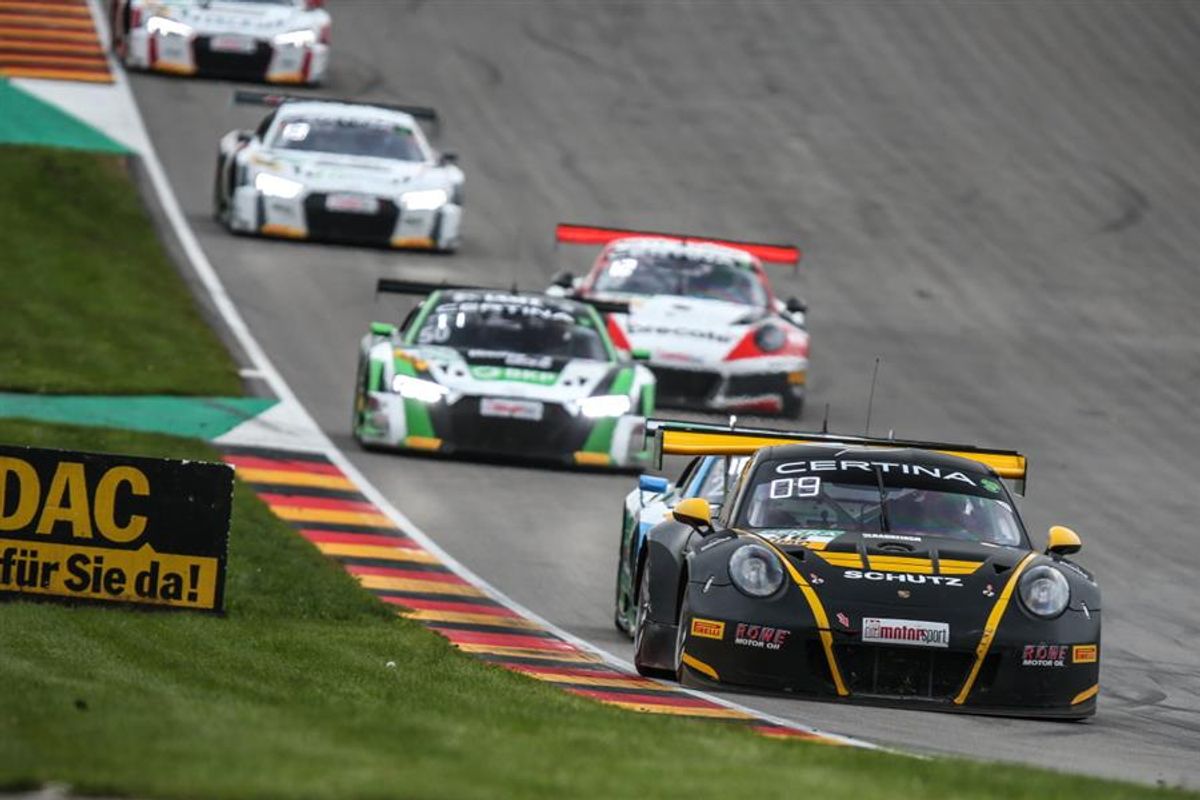 Alex MacDowall and team-mate Klaus Bachler made a welcome return to the upper reaches of the ADAC GT Masters points positions during the penultimate event of 2017 at Germany’s Sachsenring over the weekend, 16th/17th September, with a best result of seventh place in round 11.

Marking the Porsche 911 GT3R pairing’s highest finish since their fantastic runner-up spot during the championship curtain-raiser at Oschersleben at the end of April, the result in Saturday afternoon’s contest came courtesy of a very strong performance by both drivers.

Carlisle’s MacDowall took the second stint during the opening one-hour contest and after taking over the car at mid-distance, he joined the action in 10th place. Under immense pressure during the closing stages, he raced very impressively to keep a huge train of cars at bay.

In round 12 on Sunday, the bigFM Racing Team Schutz Motorsport drivers had a lot of work to do from the 10th row of the grid and ultimately had to settle for 15th position in a contest which was impacted by a late Safety Car.

“We took the most points of any of the Porsches this weekend, so that’s positive, but all of the Porsches are still struggling with the BOP [Balance of Performance] compared to the Mercedes”, reflected MacDowall, “Unfortunately I had an off in second practice which damaged the floor, so I didn’t get many laps at all there, but I was pretty happy with my pace as the weekend went on.

“Race one was good, the car was performing reasonably well in race trim but qualifying was still about a second off so that made the races hard work. I’m fairly happy with seventh, though, and it was good to be able to defend all the guys behind and keep a cool head.”

Bachler started round 11 from 15th on the grid and after a good launch he smartly threaded his way through a multi-car tangle at Turn One to slice his way into the top eight. Setting his sights on the cars ahead, Bachler challenged hard before being edged back to ninth.

Stuck behind Dennis Marschall’s Audi, which became a bit of a roadblock, both cars gained places after the pit-stop window opened and Bachler eventually made his stop from an elevated third place with around 28 minutes to go. MacDowall joined the race in 10th position but quickly moved up into ninth and then had to keep a keen eye on his mirrors with Patric Niederhauser’s Audi closing in.

Driving impressively under significant pressure, the Briton did unfortunately succumb to a challenge from the quicker Mercedes of Luca Ludwig into the final quarter of an hour to slip back to 10th position before the Safety Car was deployed with 11 minutes to run when Niederhauser spun out.

Racing resumed with less than five minutes to go and MacDowall made a good re-start to keep the pursuing Maximilian Gotz at bay. With the action particularly frantic, Ludwig’s car was tapped off the circuit into the gravel by a Lamborghini and MacDowall was able to move up into ninth as a result.

With Gotz again pressuring as the chequered flag neared, MacDowall did a terrific job to keep the Mercedes at arm’s length and he actually moved up into seventh on the final lap as a couple of rivals slipped back, securing the team’s second highest result of the season.

Starting round 12 on Sunday firmly on the backfoot in 19th place, MacDowall took the first stint with some slight contact through the first couple of corners unsettling the Porsche and resulting in a slip back to 21st place. Working his way through strongly into 18th position over the course of the next few laps, MacDowall was then edged back outside the top 20.

Bottled up behind the Audi of Elia Erhart lap after lap, he tried everything to make the breakthrough but at the same time had to try and repel his rivals behind. Shuffled back to 22nd, MacDowall pitted at the end of lap 19 to hand the car over to Bachler who joined the race in 21st position.

Making some progress, Bachler also profited from several drivers hitting problems with one such incident leading to a Safety Car period during the last quarter of an hour. In the end, the Austrian came home inside the top 15.

MacDowall added: “We did suffer with understeer in the second race tucked-up behind the slower Audi, and with Hockenheim only next weekend I didn’t want to take any risks and damage the car. I think we should be better there, it has some slow speed corners which suit our car more and the top end is quite good for the straights. We’ll still have the BOP issue, so our aim is to be top Porsche.”

Rounds 13 and 14, the final two races of the ADAC GT Masters season, will take place at Hockenheim in Germany this coming weekend, 23rd/24th September.