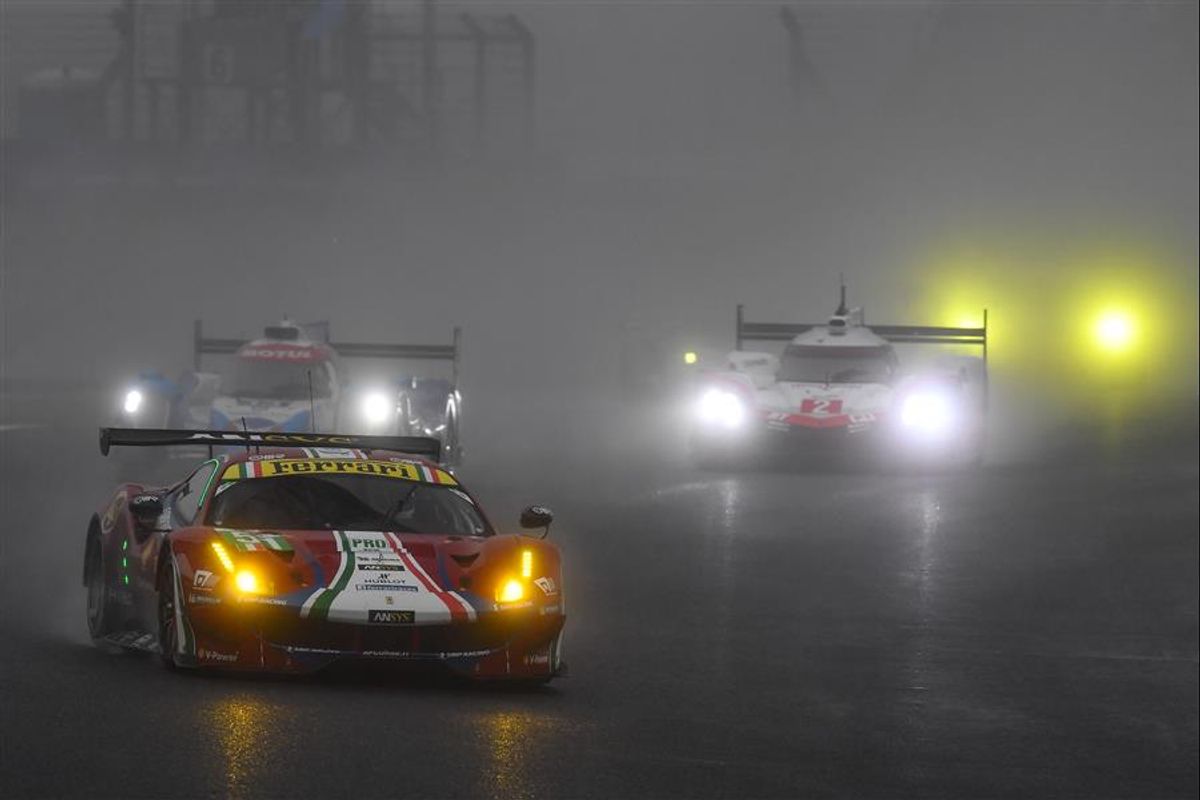 Ferrari dominated the 6 Hours of Fuji with wins in both GT classes, consolidating top spot in the Constructors’ standings and taking the lead in the Drivers’ championship with Alessandro Pier Guidi and James Calado. There are now just the races in Shanghai and Bahrain to go until the end of the season. The two drivers of car no. 51 were always on the attack and were backed by a perfect strategy from the AF Corse pit wall. Fifth place went to Sam Bird and Davide Rigon in no. 71 who were closing on fourth when the race was stopped due to fog an hour and 29 minutes from the finish. Ferrari even did the double in the GTE-Am class with a first victory for the 488 GTE of Spirit Of Race driven by Thomas Flohr, Francesco Castellacci and official Prancing Horse driver Miguel Molina. The 488 GTE of Clearwater Racing team came second with Keita Sawa, Weng Sun Mok and Matt Griffin.

GTE-Pro. In GTE-Pro class, the race was difficult and complex from the start, which took place behind the safety car after an hour of heavy rain. When the green flag was waved Alessandro Pier Guidi did superbly to jump from seventh to fifth and then rapidly to fourth, passing Christensen in the Porsche. The first suspension came after an hour and a half, preceded by three laps of the Safety Car. At that point the two Ferraris had just refuelled and the strategy was clearly spot on. Indeed, at the restart, all three leading cars had to make a pit stop and ended up behind in the standings. The Ford no. 67 even incurred a penalty at the pit exit, which cost a stop & go that relegated it to last position. With Pier Guidi behind the wheel, the Ferrari remained in the lead ahead of Davide Rigon in its sister car.

A second Safety Car caused a problem for both 488s. In fact, the cars were about to return to the pits when rain and poor visibility brought the Safety Car back out to lead the group. The two Ferraris had to make an emergency stop, which allowed them to only refuel for five seconds. When the safety car returned the two GTE 488s had to pull in again for the real pitstop. No. 51 went for a full service pitstop and driver change, with James Calado taking over with the race nearly at the halfway point. On the 71 car Davide Rigon remained behind the wheel stopping only for fuel. At the restart the Porsches found themselves in the lead with Kevin Estre in car no. 92 in front of the no. 91 of Makoviecki-Lietz pursued by Calado and Rigon. The first of the two German cars then lost the lead after the lapped Ford of Andy Priaulx collided with it.

Shortly after Calado, who had brought the tyres fully up to temperature, passed Makowiecki with a textbook manoeuvre, in a controlled slide on exiting a medium-speed curve. At the stroke of the fourth hour the decision was made to change the tyres on no. 71 while the race was neutralised. Sam Bird took over and started to climb from seventh. Lapping quickly he immediately overtook the Aston Martins and was also preparing to pass the Ford of Stefan Mucke when fog descended over the track obliging the race director to bring out the red flag. This was a third win of the season for Calado and Pier Guidi, after Nurburgring and COTA, and the fourth for Ferrari which brings its total in the WEC to 21 (26 if we include the two seasons of the Intercontinental Le Mans Cup).

GTE-Am. Ferrari also totally dominated the GTE-Am class. Local hero Keita Sawa initially held the lead on a rain drenched circuit. His knowledge of the track helped him up to sixth place overall in the GT class at the wheel of the 488 GTE of Clearwater Racing. Francesco Castellacci made rapid progress behind car no. 61 to move into second place. The middle part of the race saw a wonderful head-to-head between Weng Sun Mok and Thomas Flohr, but the last stint really made the difference with an extremely aggressive Miguel Molina powering car no. 54 up into first. This was a first win for Molina, Flohr and Castellacci in the FIA World Endurance Championship.

Standings. With this result in the 6 Hours of Fuji Ferrari has further extended its lead in the Constructors’ championship to 238 points, 47 ahead of Porsche on 191, followed by Ford on 175.5 and Aston Martin on 172. Calado and Pier Guidi move into top spot in the Drivers’ standings with 120 points, ahead of Makowiecki and Lietz on 115. Davide Rigon is third (105.5). Next round is at the start of November: the 6 Hours of Shanghai.