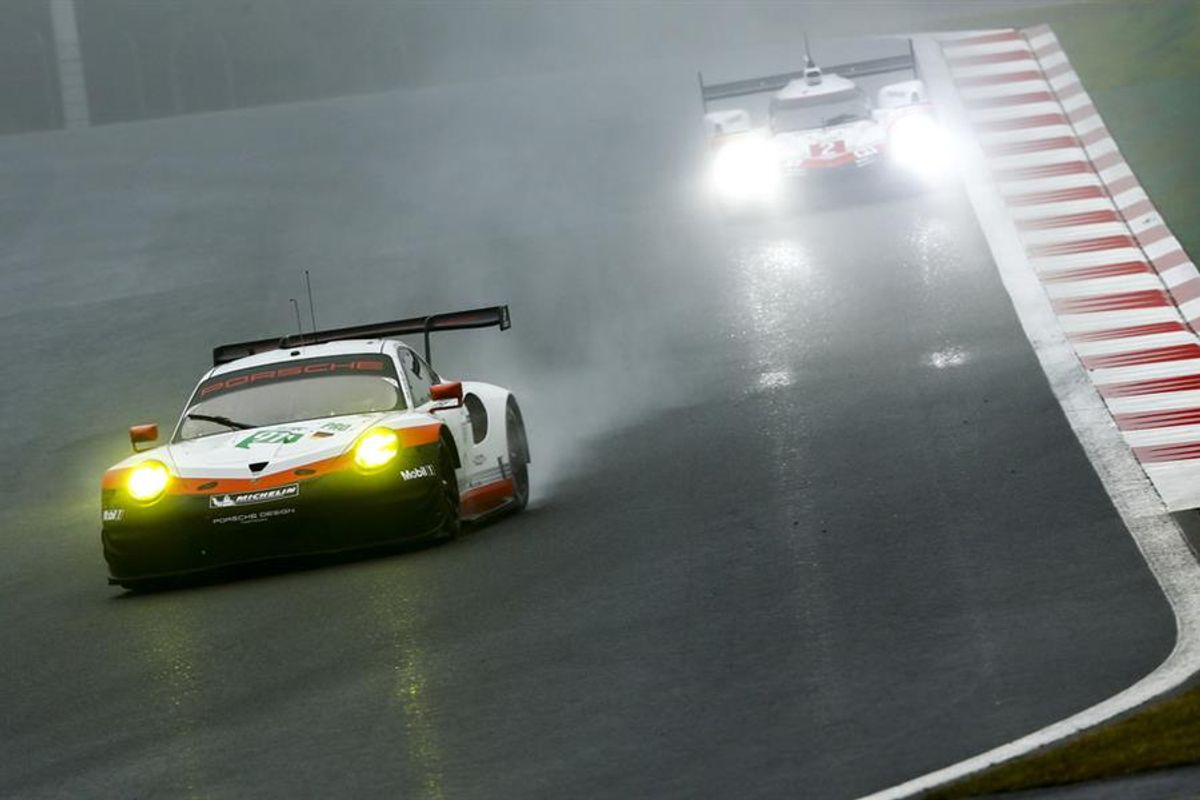 The Porsche GT Team scored two podium spots with the Porsche 911 RSR in extremely difficult weather conditions at the six-hour race on the Fuji Speedway in Japan. Facing rain and fog, Richard Lietz (Austria) and Frédéric Makowiecki (France) secured second place in the strongly represented GTE-Pro class on Sunday after a long time in the lead on the tradition-steeped 4.563-kilometre at the foot of Mount Fuji. Thanks to this result, the two have improved their chances of taking the GT Drivers’ World Championship title. With two races left on the WEC calendar at Shanghai and Bahrain, they currently rank second, just five points shy of the leader. Their teammates, Michael Christensen (Denmark) and Kévin Estre (France), who were robbed of a possible maiden victory for the new 911 RSR in the Sports Car World Endurance Championship WEC when they became the innocent victims of a crash, ultimately finished in third place.

In torrential rain at the Fuji Speedway, with the Holy Mountain hidden behind a curtain of dark clouds, Patrick Dempsey waved the green flag and sent the 26 starters on their way. In 2015, the Hollywood star had won his first world championship race in Fuji with his 911 RSR. This time, the Porsche ambassador and co-owner of the Dempsey Proton Racing kept his fingers crossed for his squad at the pit wall. It worked: The Porsche Young Professional Matteo Cairoli (Italy) and his German teammates Christian Ried and Marvin Dienst, who have already notched up two wins so far this season at the Nürburgring and in Mexico, netted another podium place with third in the GTE-Am class. With this, they reclaimed the lead in the overall classification of the FIA Endurance Trophy.

Due to the heavy downpour, the race started behind the safety car, with the field going green again after five laps. In the GTE-Pro class, Richard Lietz got away perfectly from pole position, with Michael Christensen following suit in the second 911 RSR: After seven laps he had gained two positions and was running in third. When the weather turned worse, the safety car was again deployed for almost an hour, before the race was eventually red-flagged due to bad visibility. The drivers parked their cars on the finish straight. The restart came after 32 minutes, and after a good two hours, when Richard Lietz pitted for the first time, Michael Christensen moved into the lead.

After 2:20 hours, the stewards of the meeting again decided to send the safety car out due to poor visibility on the rain-drenched Fuji Speedway. Both 911 RSR came into the pits for a splash-and-dash refuelling stop before quickly returning to the racetrack. It was clear already at that point that the race strategy on this day would play a decisive role. This time the safety car stayed out on the track for 26 minutes. After half the distance, Michael Christensen was in fourth with Richard Lietz in fifth. The Dane had just fought his way up to third place when his charge was again thwarted by another safety car phase. The Porsche GT Team strategists summoned the two 911 RSR into the pits for a driver change. Kévin Estre replaced Michael Christensen in the #92 car, with Frédéric Makowiecki taking the cockpit of the #92 Porsche from Richard Lietz. When the race director gave the rain battle the go-ahead shortly afterwards, Kévin Estre snatched the lead, with Frédéric Makowiecki running third.

The fourth safety-car phase of the season’s most unpredictable race was the first as the result of an accident. The race quickly picked up the pace and the rain eased slightly, but now fog rolled in. This, however, was no excuse for the lapped Ford pilot to ram into the leading Kévin Estre almost without braking and forcing him into a spin. Unsurprisingly, the 911 RSR of the Frenchman sustained damages: The collision affected the aerodynamics at the front as well as the diffuser at the rear. The result of this was that not only did the vehicle fall back to third place, but from this point on it lost around a second per lap to the front-runner. The fact that his teammate and compatriot, Frédéric Makowiecki, inherited the lead was only a small consolation. At a later stage, however, Makowiecki lost his top spot in a close overtaking manoeuvre with a Ferrari. From that point on, he continued in second, with Kévin Estre in third.

When the fog became thicker on the Fuji Speedway and the pilots complained of worsening visibility, the stewards of the meeting opted for another safety car phase. Thirteen minutes later, the field was halted again with the red flag. This was the last caution phase of this eventful seventh round of the Sports Car World Endurance Championship WEC: With no improvement expected, the race was not restarted.

Round eight of the Sports Car World Endurance Championship WEC will be contested in Shanghai/China on 5 November.

Comments on the race
Alex Stehlig, Programme Manager WEC: “The conditions today were very tricky. The many safety car phases and red flags made it very difficult for the engineers to make the right decisions. However, the team worked brilliantly and had interpreted these interruptions correctly. It was bitter that an already lapped competitor cost our leading #92 car a possible win. The #91 drove a steady race, but directly after the restart it didn’t have the pace for a short time to fend off the Ferrari. Second and third are still great results. We were among the fastest over the entire race weekend. It’s a shame that it wasn’t enough to yield our first win in this world championship.”

Richard Lietz (911 RSR #91): “We had an excellent car this weekend. In qualifying we posted pole position and our 911 RSR was also very fast in the race. Our team had the right strategy for every situation, no matter whether it was for the safety car or Full Course Yellow – everyone kept their cool and made the right decisions. It was sometimes very hard to see with the spray flying up from the prototypes in front. It was almost like driving through a wall. Plus, there was so much water on the racetrack we could easily have swum a few laps. Still, our 911 RSR performed really well under all conditions. We’re currently second in the championship. The title race is still open. Now we’ll do everything we can to earn plenty of points in Shanghai.”

Frédéric Makowiecki (911 RSR #91): “I took over the car during a safety car phase. The restart was somewhat difficult, but I managed to overtake a Ferrari and then I was in second place. When our leading #92 car got caught up in an accident, I took the lead. Our pace was good and we could even pull clear of our pursuers a little, but then we lacked grip at the front axle, which had a negative effect on the performance. Today’s race was very challenging, but our team always made the right decisions.”

Michael Christensen (911 RSR #92): “That was a tough race. A lot happened that we didn’t expect. And the weather in Fuji was crazy again. My first stint was not perfect. We changed the air pressure for our wet tyres for the second stint and then we had the fastest car on the track and I could take the lead. If it weren’t for the crash we could’ve won. Still, we can be satisfied with a double podium for Porsche at such a difficult race.”
Kévin Estre (911 RSR #92): “I’ve never had to wait so long for my turn in a race. When I finally got to drive after three hours, I managed to overtake two prototypes after the restart after the first safety car phase and pull slightly clear of my pursuers. After another restart I lapped a slower Ford. He obviously missed his braking point in the next corner and drove straight into my car. I spun and had to continue with my 911 RSR damaged at the front and rear. It became increasing difficult at the end. I’m pleased that I could defend my third place to the flag.”