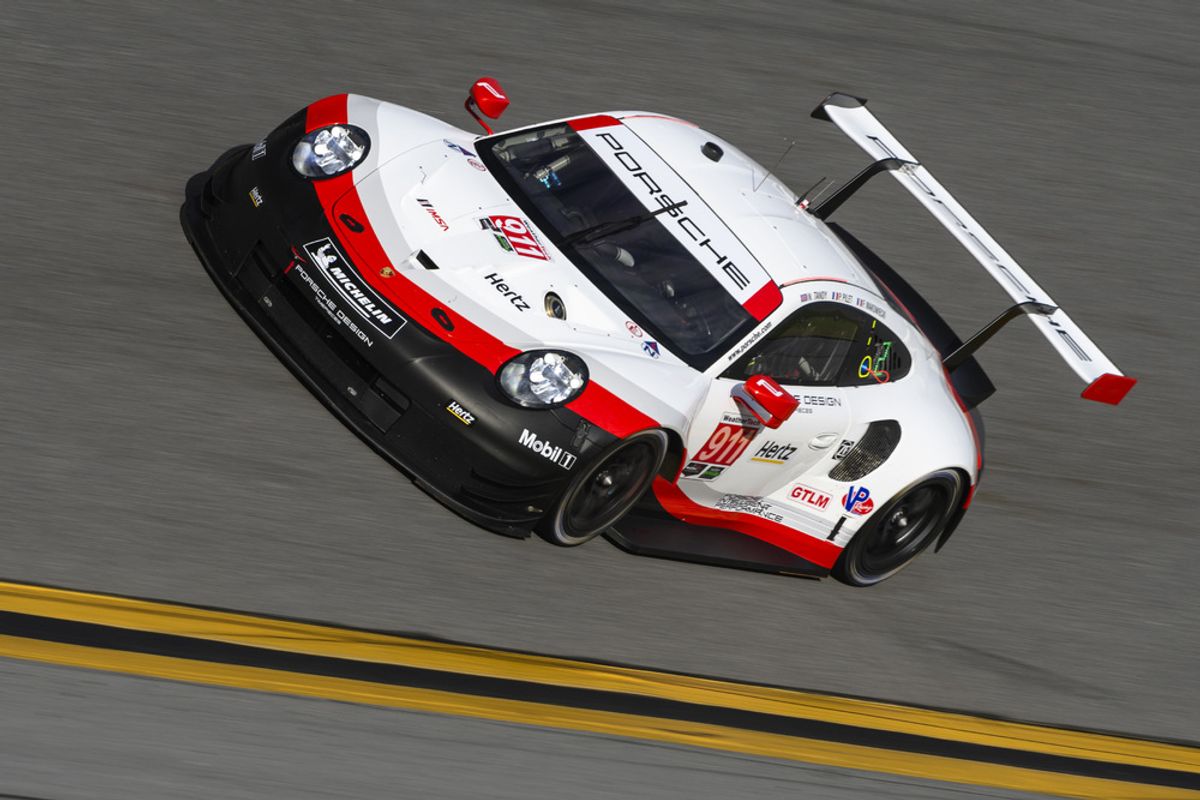 The 12 Hours of Sebring, the toughest and oldest sports car race in the USA, will be held for the 66th time on March 17th. Porsche has written motorsport history on the legendary Sebring International Raceway scoring a raft of successes. However, it is not only the 18 overall victories and 70 class wins that make Porsche the most successful manufacturer at this classic. Also unequalled are the 4,198 laps in the lead on the airfield circuit in the heart of Florida. At least one Porsche has lined up on the grid every year since 1953 – except in 1974 when the race was cancelled due to the oil crisis. Fifty-eight years after the first overall victory with the Porsche 718 RS, two 510 hp 911 RSR fielded by the Porsche GT Team will go up against four other automobile manufacturers in the strongly represented GTLM class. Porsche customer teams campaign two 911 GT3 R racers at round two of the IMSA SportsCar Championship and the North American Endurance Cup.

The race
This race is one of the great sports car classics. Immortalised on the winners’ list are Porsche legends such as Dan Gurney, Hans Hermann and Jacky Ickx, as well as the Formula One World Champions Juan Manuel Fangio and Mario Andretti. Hollywood stars have also fulfilled their racing dreams on the Sebring International Raceway: Paul Newman and Patrick Dempsey competed here, as did Steve McQueen, who even finished on the podium scoring second overall in 1970 with a Porsche 908. The 5.954-kilometre Sebring International Raceway, remodelled from a former US Air Force airfield, hosted the inaugural race on December 31, 1950.

The Porsche vehicles
In addition to the optimised setup of the 911 RSR, the reliability has been further improved for the round two of the season. Depending on the size of the restrictor, the motor, which is positioned in front of the rear axle, puts out around 375 kW (510 hp). The particularly large rear diffuser combined with a top-mounted rear wing provide strong downforce and aerodynamic efficiency. For 2018, Porsche offers its customer teams an evo-kit for the 911 GT3 R. The more than 368 kW (500 hp) racer was designed for worldwide GT3 series on the basis of the 911 GT3 RS production sports car.

Porsche’s successes
Porsche’s first victory at the Sebring International Raceway came in 1960 courtesy of Hans Herrmann and Olivier Gendebien in the 718 RS/60. Since then, the sports car manufacturer has notched up a total of 18 overall victories and 70 class wins. The most recent success was in 2015 with the Porsche 911 GT America fielded by Alex Job Racing. One year prior, Jörg Bergmeister, Michael Christensen and Patrick Long triumped at the wheel of a Porsche 911 RSR. Since 1979, Porsche has netted 28 GT class victories, with a sports car from Zuffenhausen starting from the GT pole position 15 times. With these impressive successes and an unparalleled series of 13 straight outright victories between 1976 and 1988, Porsche is a Sebring record-holder.

Pre-race quotes
Dr. Frank-Steffen Walliser, Vice President Motorsport and GT Cars: “We didn’t start the 2018 season at Daytona with the results we’d hoped for. Although this adds to the pressure, it’s best for us to remain calm. The season has only just begun. We know where we need to make improvements and we’re working hard on this. In spite of everything, we took a lot of positives from Daytona. At Sebring, we’ll now try to turn those positives into an even better performance and a result that meets our expectations. After all, as the most successful manufacturer in the history of this unique race, we have a reputation to uphold. We’ll do this with the best possible preparation and the usual commitment from the entire team.”
Pascal Zurlinden, Director GT Factory Motorsports: “The second classic of this season poses a brutal challenge. The heat in Florida and the very bumpy racetrack push drivers to the limit. And the demands on the cars are more extreme than at any other race on the IMSA SportsCar Championship calendar. We’ve conducted more test kilometres in Sebring with our 911 RSR than on most other racetracks, so we’re very well prepared to face the stiff opposition.”
Sebastian Golz, Project Manager 911 GT3 R: “The Sebring International Raceway is a racetrack that puts the highest demands on the durability of the material. Thanks to its rear engine concept, the 911 GT3 R has excellent traction characteristics. It can use this advantage, mainly when accelerating out of the tight hairpin at the end of the start and finish straight. With the evolution package that we developed for 2018, our customers should be in a position to fight for a podium spot with the 911 GT3 R.”
Patrick Pilet (911 RSR #911): “We’ve almost always had a very good car for Sebring. I feel that our 911 RSR is again well suited for this legendary racetrack. It’s an extreme race where you go flat-out right from the start. Tactical manoeuvring like at Daytona doesn’t work here. I’ve never won at Sebring, so I’m keen to change that.”
Nick Tandy (911 RSR #911): “This twelve-hour race is a real highlight of the season. The track is very demanding. With all the bumps, it’s a huge challenge and not just for drivers. The stresses that Sebring puts on the cars are greater than at almost any other race. The reliability of our 911 RSR is definitely an advantage there.”
Frédéric Makowiecki (911 RSR #911): “Sebring is my all-time favourite race in the USA. The masses of fans really know their stuff when it comes to motorsport and they lend a spirit that I very much like. The atmosphere they bring to the event is fantastic.”
Laurens Vanthoor (911 RSR #912): “It‘s a very difficult race where you can only survive with an extremely reliable car. The Sebring International Raceway poses a huge challenge. The bumpy surface is brutal and shakes you like a jackhammer. Luckily I’ve just been to the dentist. He assured me that my fillings won’t fall out.”
Earl Bamber (911 RSR #912): “Since our memorable 50-hour test with the 911 RSR, I know every kerb at Sebring. I’m really looking forward to this cool race with masses of fans and its great atmosphere. After Daytona, we’re obviously under a bit more pressure, however we can’t afford to let that make us crazy. One decent result at Sebring and everyone will quickly forget about the not-so-convincing start of the season.”
Gianmaria Bruni (911 RSR #912): “I regard Sebring as one of the most beautiful racetracks in the USA. And because of its qualities, it’s one of the most demanding. It puts the drivers and cars under enormous stress. I’m looking forward to driving at Sebring for the first time with Porsche and the 911 RSR.”
Patrick Long (911 GT3 R #58): “Driving for hours at the limit in Sebring demands everything from a driver – it’s the heat and especially the track. It’s really extreme. There’s nothing like it. Winning this race in 2014 with the 911 RSR was one of the highlights of my career.”
Mathieu Jaminet (911 GT3 R #58): “After Daytona, I’m now looking forward to driving the 911 GT3 R at Sebring. It’ll definitely be an interesting and significant experience for me.
Jörg Bergmeister (911 GT3 R #73): “The Sebring race is only half as long as Daytona, but twice as exhausting. The bumpy racetrack takes its toll over time and the car has to endure a lot, as well. Still, we all look forward to this challenge and to giving the enthusiastic fans a great show.”