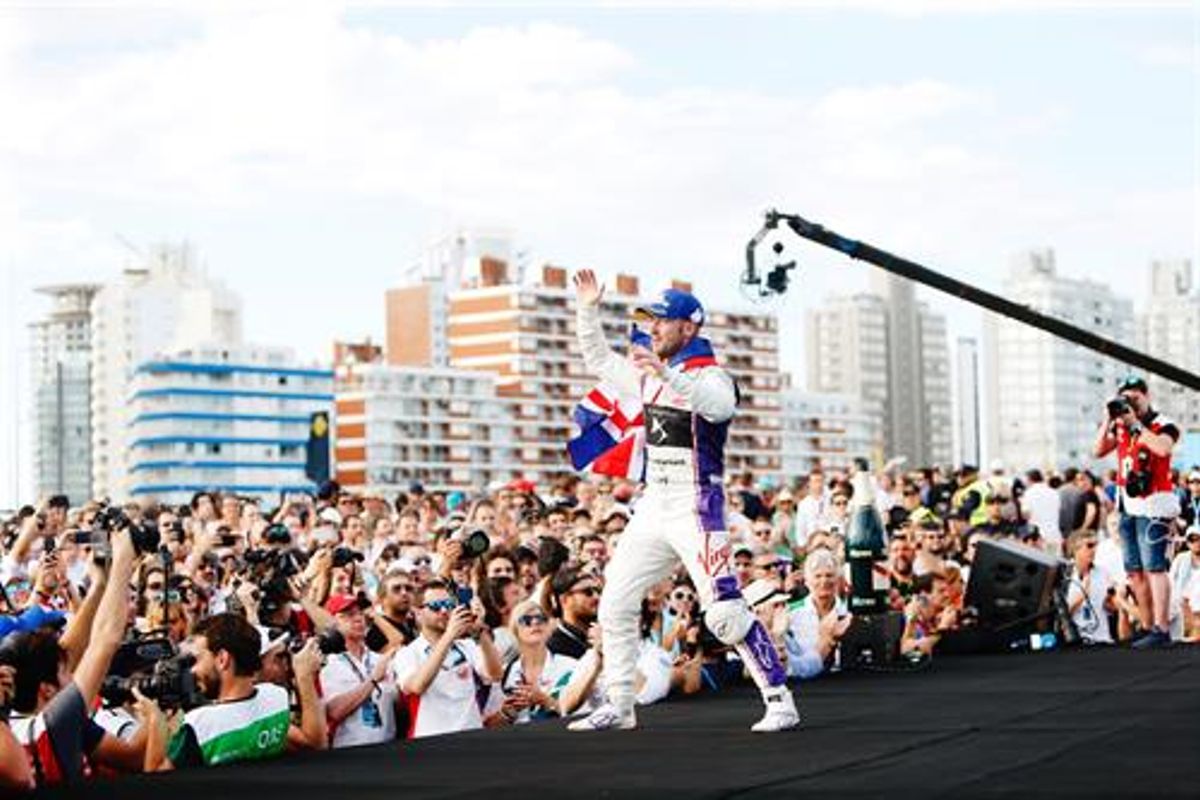 DS Virgin Racing move to third in both drivers’ and teams’ standings as series reaches halfway point
DS Virgin Racing’s Sam Bird made up six places to secure his twelfth career podium during the weekend’s thrilling Formula E race in Punta del Este, with teammate Alex Lynn producing his best ever finish with sixth. The results of the two British drivers moves the team into third position in the manufacturer standings – with Bird also third in the drivers’ championship – as the all-electric series reaches its halfway stage.

In beautiful, sunny conditions, the Uruguayan beach resort played host to the third and final race in the championship’s Latin American leg, with both Bird and Lynn showing strong pace from the off and never running outside the top ten during the morning’s practice sessions.

Their strong pace continued into qualifying where Lynn yet again made it into the Super Pole (top five) shootout and would go on to start the race third, with Bird a little further back in ninth. As the 37-lap race got underway, Lynn held onto third place with Bird already moving up the field to seventh place in the early stages. After a brief safety car period, both drivers looked competitive heading towards the pit stop window on lap 20.

However, running with less energy, Lynn had a slower in-lap combined with a tricky pit stop to allow team-mate Bird, and others, to get the jump on him with the two re-joining the race in fourth and fifth. This allowed Bird to start to pull away and chase after the leading duo of Lucas di Grassi and Jean-Éric Vergne, whilst Lynn was working hard to keep a pressing Felix Rosenqvist and Mitch Evans at bay.

In the closing stages, Lynn was forced to settle for sixth, while Bird had now joined the battle for the lead pressing both leaders hard, but sadly ran out of laps before he could mount his challenge. Sam Bird, who dedicated his podium to the late journalist Henry Hope-Frost, said: “We were slightly fortunate with drivers around us having issues, but the pace was good today and we really wanted to fight for the lead at the end; but it wasn’t to be. Overall, it was a strong race for us and nice to get another podium, as well as a great result for the team and also to help keep our title bid going.”

Alex Lynn said: “For sure it has been a positive race for us and I’m really pleased to come away with sixth and my strongest result to date. The pace was good as we were once again in Super Pole, but things didn’t quite go our way during the race, but it’s still a great result for me and the team.”

Team Principal Alex Tai commented: “We’ve previously not had the results at this track so it’s even better to come away with such a strong finish and I’m delighted for both Sam and Alex. Formula E is very competitive so to be in third position in both the drivers’ and the teams’ championship at the halfway point is really a testament to the hard work and dedication of the whole team. We will continue to bring our strong performance to the upcoming European races and will fight for both driver and team championship.”

DS Performance Director Xavier Mestelan Pinon added: “We’ve scored big points here in Punta del Este, allowing us to recover third place in the team standings. We’ve just crossed the halfway mark of season four and being third in both championships offers us great opportunities moving forward for the second half of the season.”

The series now heads to Europe with the next round of the 2017/2018 ABB FIA Formula E Championship taking place for the first time in Rome, Italy on April 14.