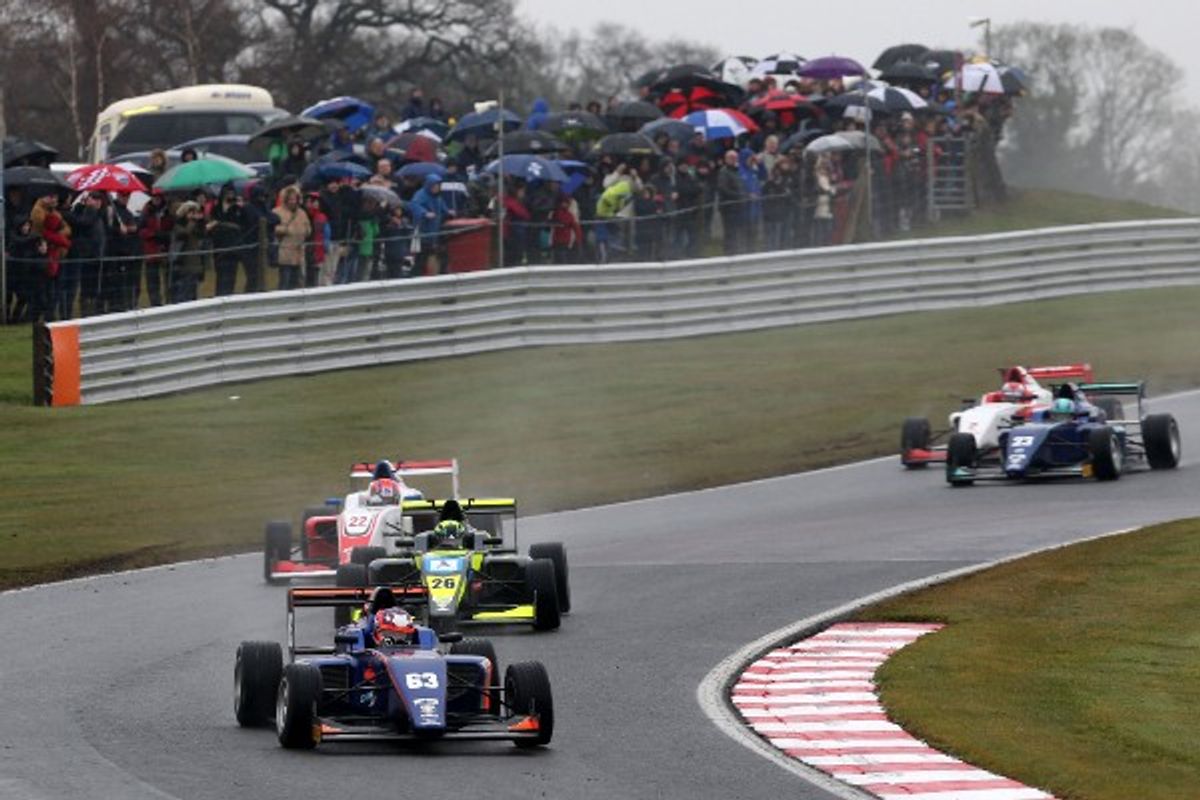 Manuel Maldonado was the other Monday winner, and the first victor of British F3’s revolutionary new race two format.

Kjaergaard, who claimed his first podium in Saturday’s race one, fought back through the field in race two to finish fourth from 15th on the grid, and then converted pole in race three to victory, and holds an 18 point lead in the standings at this early stage over race one winner Linus Lundqvist.

Race two
The second race of the Oulton Park weekend, held this morning, saw the debut of BRDC British F3’s revolutionary new race two format, which sees all finishers from race one reversed on the starting grid. In addition, positions gained compared to starting positions are rewarded with championship points, promising an enthralling spectacle throughout the season, and this is exactly what the race delivered.

Tristan Charpentier lined up on pole position on a very wet track, but it was his Fortec Motorsports team mate Maldonado who stole the march on his rivals with a stunning start. The Venezuelan, cousin of F1 race-winner Pastor Maldonado, sliced through the middle of the pack from sixth on the grid to lead by the first corner, Old Hall.

He then held firm through two safety car periods, and was declared the victor when the red flags were brought out with a car stranded on lap eight. Pole sitter Charpentier followed his team mate throughout to claim his first British F3 podium, while Jamie Chadwick put her experience to good use to take third place, having started ninth. Chadwick was up to fourth by the end of the first lap, and then passed Malaysian Chia Wing Hoong on lap two to clinch her second British F3 podium.

Behind the podium trio there was plenty of additional drama as race one’s highest finishers surged through the field. Race one winner Lundqvist immediately climbed to seventh at the end of lap one, having started 16th, while Kjaergaard soared to ninth from 15th on the grid. Race one pole sitter Clement Novalak, starting from 17th as a result of his first lap retirement in the opening contest was equally impressive, slicing through to 10th at the end of the first tour. Kjaergaard’s progress took him to a fourth place finish, earning him an additional 11 championship points, while Novalak claimed seventh by the chequered flag and 10 additional points. Lundqvist eventually finished eighth, an eight place gain.

Amongst all that, Kush Maini improved on his race one performance to claim fifth ahead of Fortec’s Tom Gamble, who had started 13th. Saturday hero Billy Monger secured ninth place from 14th on the grid, with Arvin Esmaeili completing the top-10.

Race two
After setting the fastest lap over the course of the first two races, Kjaergaard headed the front row for race three ahead of Lundqvist, with Gamble and Monger completing row two.

With conditions much the same as race two, Kjaergaard made a strong start to lead the field down to Old Hall with Lundqvist holding second initially. With rain falling throughout and intensifying, track conditions were difficult as demonstrated by Lundqvist's moment at Hislops on the first lap, where he ran over the grass and dropped to fourth, with Gamble and Maini profiting.

Kjaergaard led by over two seconds at the end of the lap from Gamble, but from there, the Fortec driver began to close the gap, with the lead at 1.4 seconds on lap three, and seven tenths on lap five. The margin between the two never increased beyond 1.2 seconds for the remainder of the contest, with the Danish driver beating the Brit by 0.814s at the chequered flag.

Maini in third finished 1.125s ahead of man on a mission Novalak. With the grid based on fastest race laps from races one and two, and Novalak not completing a lap in the much quicker race one on Saturday, he found himself at the back of the grid once more for race three. But like in race two he put on a show, climbing from 16th to 10th on the first lap, and then steadily picking off drivers for the remainder of the race, passing team mate Sun Yue Yang on lap two, Charpentier and Chadwick on lap three, and Mahadik on four. He then closed on team mate Monger and made a move stick on lap five before setting his sights on Lundqvist, who at that time was holding fourth. A five second margin was closed down to two seconds, and when Lundqvist ran over the grass at Hislops, the position was Novalak's. The Carlin driver then looked to close down on Maini, who was four seconds ahead, but ultimately finished just over a second behind.

Lundqvist completed his strong start to the season with fifth place, while Charpentier claimed sixth. Jamie Chadwick finished ahead of Billy Monger who completed his comeback weekend with eighth. Krish Mahadik's claimed ninth, while Manuel Maldonado fought back from a pit-lane start to finish 10th, after his earlier breakthrough victory.

Championship leader Kjaergaard commented: "It’s been a long wait to win, but I’m really happy about it. We’ve had a really strong weekend from practice right way through to the last race. We’ve had really strong pace, a great car from Carlin, and a first win in the first round of the year so I’m very happy and hopefully we can keep it up for the rest of the year.

"I think we’ve shown that we’re definitely a contender for the championship, and if Carlin and I can keep the work up, which I’m sure we can, then we should be up at the front for every round. That’s the plan and hopefully we can aim for the championship. Its early days but it’s been a good start.”

Kjaergaard holds an 18 point margin over Lundqvist in the early championship standings, with Tom Gamble third after his strong debut weekend in single seaters. Kush Maini’s constant improvement pushes him to fourth, a single point ahead of Jamie Chadwick and Billy Monger, inside the top-six on his racing comeback weekend, which saw him claim a podium on his return to competitive action on Saturday.