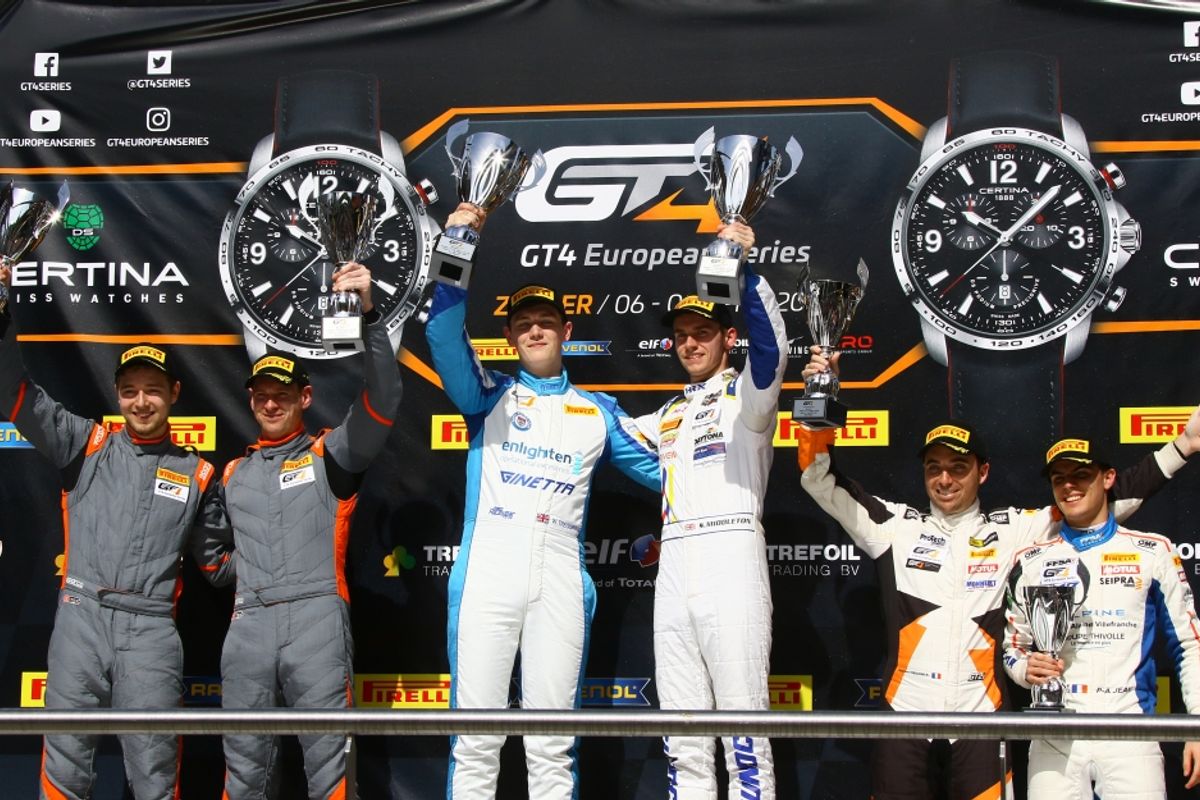 Highly rated endurance racing duo Stuart Middleton and Will Tregurtha made an indelible impression on the GT4 European Series during their maiden outing in the championship over the weekend, 7th/8th April, with an outstanding victory in race two at Zolder in Belgium.

Starting the event with a hugely competitive showing in qualifying, Ashington racer Middleton securing third on the grid for round one and Milton Keynes driver Tregurtha scorching to a maiden series pole position in the round two session, in the races they delivered supreme performances.

Celebrating a richly deserved maiden podium with third in race one on Saturday afternoon, which later became second following a penalty for a rival, in race two on Sunday the reigning British GT4 Champions – both part of the Ginetta Driver Development Programme – secured a dream result with victory for the No.55 HHC Motorsport Ginetta G55.

Racing against 43 other teams in the hugely popular championship, with new cars from the likes of Audi, BMW and Mercedes, the season-opening performance of the British duo and their trusty HHC engineered Ginetta was nothing short of exceptional

Stuart Middleton:
“I’m absolutely delighted with how our first weekend in the championship has gone – P2 and then a win from the two races, it’s awesome and you can’t ask for much more than that from our first ever races in Europe and first at Zolder. We’re racing against some very experienced drivers and some really top teams, so we’ve got to be happy with what we achieved this weekend.

“In practice we knew we were strong and so we were confident going into qualifying. I was happy with P3 and Will did a fantastic job with pole in his session, the team set the car up amazingly as they always do. In the second race when [Nicolaj] Moller-Madsen went by, I could see he was struggling with tyres as he’d pushed so hard to catch me – but in the end we didn’t need to fight him due to his penalty.”

Will Tregurtha:
“I’m really happy, it’s been a fantastic weekend. To take pole in my first qualifying session in Europe was pretty awesome, we played it smart with the traffic and looked after the tyres and Stuart did well in his session too with P3. To finish on the podium in the first race was fantastic, I really did enjoy it.

“In the second race we did struggle with tyres at the end, Zolder is a very abrasive track and is hard on brakes and tyres. The start was tasty, I fended off cars that have more top speed than we do and I was happy with my stint. The car felt really good actually and I think it’s the best stint I’ve ever driven. I’ve always wanted to race at Zolder, to win on our championship debut is incredible.”

Beginning their maiden weekend in the GT4 European Series in impressive style, the British Racing Drivers’ Club (BRDC) Rising Stars were third fastest in the opening practice on Friday, 6th April, and in the top three again in session two – a very strong marker ahead of qualifying and the races.

Qualifying on Saturday morning went just as well, Middleton securing the third fastest time for the race one grid with a lap of 1m38.454 seconds while Tregurtha scorched to the race two pole position with a fantastic lap of 1m38.259 seconds – almost 0.3 seconds clear.

Middleton, taking the first stint in Saturday’s race at the wheel of the No.55 Ginetta, made a great start to move into second place and he began to pile pressure onto the race leading Audi. Remaining in second place up to the 40 minute mark, Middleton was then successfully challenged by the McLaren of reigning GT4 European Series Champion Ricardo van der Ende and so edged to third.

Sticking with him, Middleton – backed by North East Caravans, Steel & Jelly and Spine Optics – continued to circulate behind the McLaren as the pit-stop window for driver changes opened. Van der Ende pitted first with around 28 minutes to run and the HHC Ginetta continued for another lap.

Pitting the next time around to hand over the car to Tregurtha, he rejoined the race in second and began to come under pressure from van der Ende’s team-mate Finlay Hutchison. Officials then deployed the Safety Car with roughly 22 minutes to go, as a result of a stricken Porsche, with the action eventually resuming with 11 minutes on the clock.

Enlighten and Spine Optics-supported racer Tregurtha maintained second, under immense pressure, but on lap 28 the McLaren moved past into the chicane and so the Ginetta was shuffled back to third where it remained to the chequered flag. At the conclusion of the weekend, though, a penalty for the second placed finisher elevated the HHC duo into the runner-up placing.

In round two on Sunday morning Tregurtha made the most of his superb pole position by holding the lead of the race off the start and then soaking up all sorts of pressure from the Audi of Patrick Zamparini. As the opening quarter of an hour concluded, the Safety Car was deployed and when the action resumed shortly after another incident almost instantly triggered its reappearance.

The second of the cautionary periods lasted around 10 minutes and, as a result, championship officials delayed the opening of the pit-window. Racing resumed with 29 minutes to go and Tregurtha managed to keep Zamparini at bay, before starting to open a significant advantage.

Building a cushion of more than five seconds and setting the fastest lap of the race too, with around 19 minutes still to run he made the regulation pit-stop to hand the Ginetta over to Middleton. Great work from the HHC pit crew meant Middleton was able to slot into the race with a substantial lead.

Just under six seconds ahead of van der Ende’s McLaren, Middleton had everything in control into the last quarter of an hour but problematic backmarkers meant his advantage over the closing Nicolaj Moller-Madsen was reduced significantly.

Driving impressively under immense pressure, Middleton did slip to second behind Moller-Madsen with a lap and a half to go but the Dane had a time penalty which meant the HHC driver didn’t need to fight the position. Despite taking the chequered flag in second place, Middleton and Tregurtha were victorious in the final classification by 20 seconds.

Next on the championship schedule is a visit to ‘home’ soil for Middleton and Tregurtha with the second race meeting of the GT4 European Series taking place at Brands Hatch in Kent, over the weekend 5th/6th May.