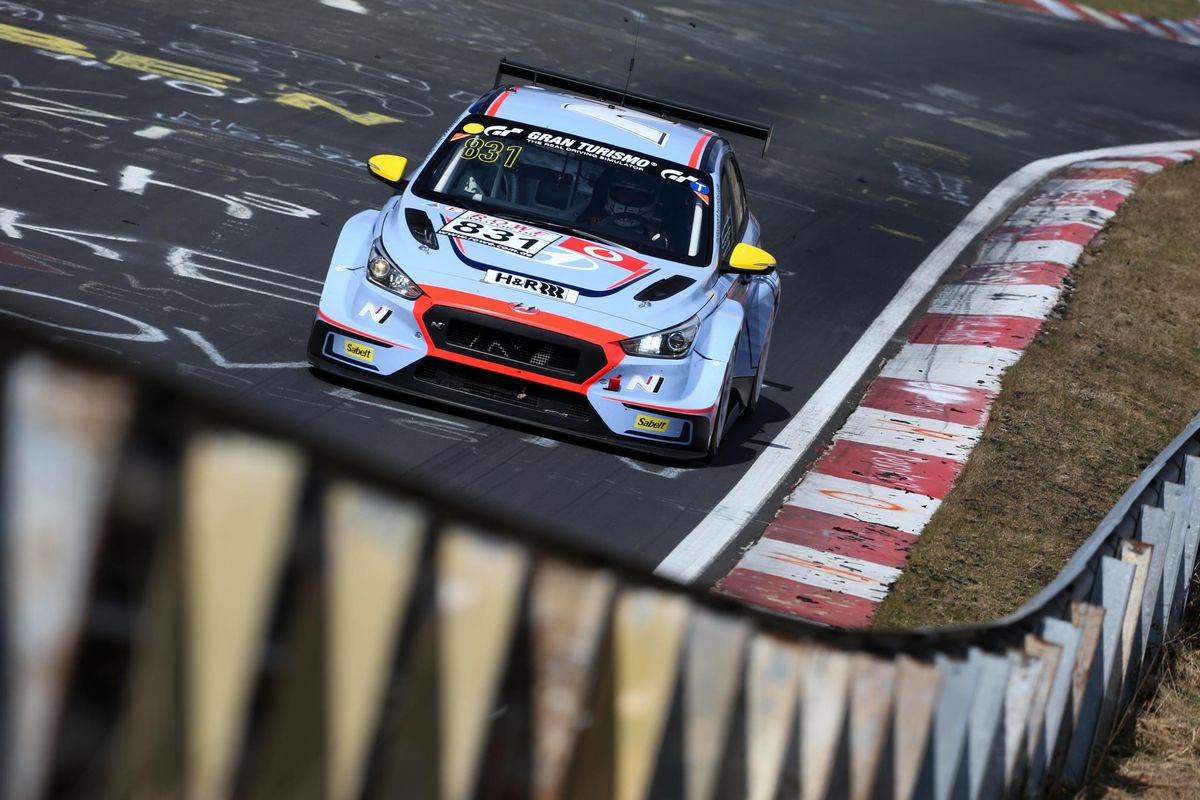 Two i30 N TCR will take on the Nürburgring 24 Hours Qualifying Race and the ADAC Nürburgring 24 Hours
The extended program for the car on the Nordschleife follows a class podium on its first outing in last month’s four-hour VLN event
Two four-man teams will drive the entries in both events, bringing together a wealth of experience of racing around the 25km circuit.
Alzenau, Germany

The Nürburgring 24 Hours attracts vast grids and huge crowds every year. Its position as one of the highlights of the racing season makes it the perfect occasion to showcase the performance of the i30 N TCR and the endurance racing options designed for long-distance events where TCR cars are eligible.

The endurance racing package that will be sported by the cars at the Nürburgring is also available to customers. The options pack includes an ABS-system, additional lights for running during darkness and a kit that allows for fast refueling.~

The same experienced line-up of eight drivers will be split between the two cars for this weekend’s six-hour Qualifying Race as will take the controls for the 46th running of the 24 Hours on the 25km circuit, famously dubbed the ‘Green Hell’.

On the i30 N TCR’s maiden race on the fearsome circuit Gabriele Tarquini and Korean driver Jae-Kyun Kim finished a sensational third in class, despite losing time to contact at the very first corner. Though Tarquini will not be part of the endurance line-up, as he is concentrating on the FIA WTCR season and the Race of Germany that will take place on the Nordschleife during the 24 Hours weekend, Kim – a standout performer in VLN1 – will continue with the team for the longer races.

Nicola Larini and Manuel Lauck will also reprise their roles with the team from VLN1, where they finished sixth in class despite a stop in the pits for repairs following an accident. The pair brings significant Nordschleife and 24 Hours experience, including a class win together in 2012, with a list of starts in equipment ranging from production cars to one-off exotica. Lauck will be joined in the line-up by his German compatriots Andreas Gülden and Peter Terting. Once again both men bring with them a considerable pedigree in endurance racing, with Gülden – also a driving instructor on the Nordschleife – set to continue a string of ADAC Nürburgring 24 Hours starts that stretches back to 2012 and last year had him win the TCR class.

The level of experience in a TCR-specification car is added to further by TCR Germany race winner Moritz Oestreich, who already has one Nürburgring 24 Hours class win to his name, and Byung Hui Kang, a talented Korean journalist and racer who is already confirmed as an i30 N TCR driver for this year’s inaugural TCR Korea season. The team is completed by another journalist-driver, in the form of German Guido Naumann. No stranger to either the circuit or the driving seat of a Hyundai, Naumann has been part of Hyundai Deutschland’s line-up for the Nürburgring 24 Hours three times, including two starts in cars derived from the previous generation of road-going i30 models.

The cars will be entered under the Hyundai N banner for both races, run by Hyundai Motorsport Customer Racing in conjunction with successful TCR squad Target Competition. The Italian based team’s drivers have won the last two TCR Germany titles. However in 2018 they will focus on the TCR Europe Championship with the i30 N TCR.

The i30 N TCR is the first Hyundai Motorsport built car especially for circuit racing. Designed and developed by the company’s Customer Racing Department at the team’s headquarters in Alzenau, Germany. The car made its competitive debut in the Chinese round of the TCR International Series in 2017, taking victory in its very first race. The first customers took delivery of their i30 N TCR in December, and our customers have since seen action in the UK and America as well as the opening round of the FIA WTCR season, where i30 N TCR customers scored a sensational double win.

Hyundai Motorsport Customer Racing Deputy General Manager Andrea Adamo said: “We were very happy with the performance of the i30 N TCR and the drivers at the first VLN race last month, so it was only natural that we look to the next challenge to prove the competitiveness of the car and our endurance racing package. The Nürburgring Nordschleife remains one of the toughest tests in motorsport. As the biggest event of the year on the track the ADAC Nürburgring 24 Hours is the perfect place to show the i30 N TCR to the fans, and our potential customers. For both the Qualifying Race and the 24 Hours we have a strong driver line-up who have experience of both endurance racing and the Nordschleife. Together they and the team will be able to get the most from the car in what I am sure will be a very competitive class on an extremely demanding circuit.”