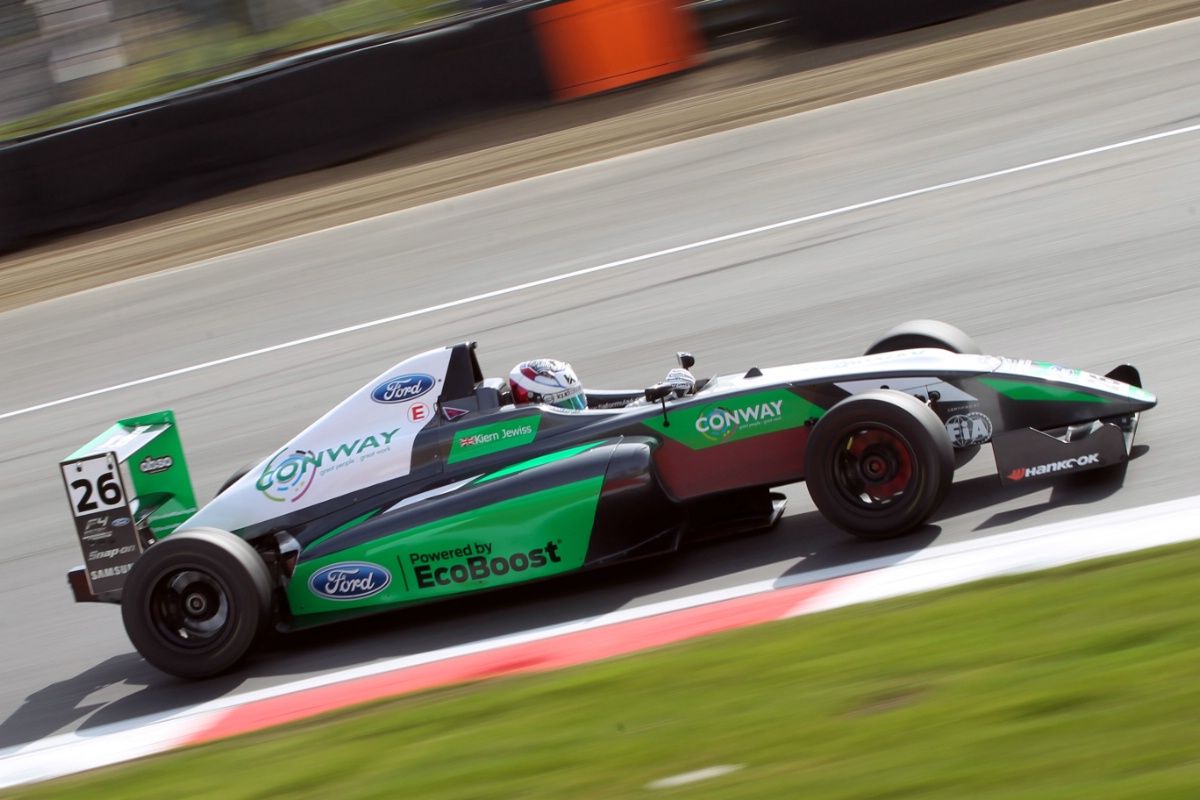 Talented single-seater newcomers Kiern Jewiss and Paavo Tonteri both made a highly successful start to the F4 British Championship certified by FIA Powered by Ford season at Brands Hatch over the weekend, 7th/8th April, by securing a significant haul of silverware for Double R Racing.

British 15-year-old Jewiss, who did lead the third race at one stage, ended his maiden weekend in the series with a brace of second place results – in rounds one and three – while Finnish 18-year-old Tonteri starred in the finale with third overall and the Rookie Cup class win.

Mexico’s Sebastian Alvarez, meanwhile, concluded his first event in British F4 with a best result of fourth in the Rookie class and 11th position overall in round one. In terms of the championship title race, Jewiss departed Brands Hatch third in the standings with Tonteri fourth for the Woking squad.

“It’s been a very promising start to the British F4 season for Double R”, said team principal Anthony ‘Boyo’ Hieatt, “Obviously we’re a bit disappointed not to have won a race, as we had the pace, but Kiern, Paavo and Sebastian all did a fantastic job. Two podiums for Kiern and a podium and a Rookie win for Paavo are a great way to start things off, we’re pleased to have been so competitive.

“I’m also delighted with the new Neil Brown Engineering engines we’re using in F4 this year, there’s been a massive effort from them and everything seems to be very fair and equal. It’s a definite step forward for the championship to have them and something Double R applauds.”

Double podium for Jewiss and excellent Rookie win for Tonteri
During officially timed testing at the Kent track on Friday, 6th April, Jewiss got his maiden F4 event off to the perfect start with the quickest time in session one, before ending the day second on combined times – a mere 0.035 seconds shy of the fastest of all.

Tonteri also impressed as the fastest of the Rookie Cup contenders, fifth overall for the day and just 0.1 seconds shy of the outright pace, with Alvarez 12th quickest and within half a second of the top of the timesheets.

Heading into qualifying on Saturday morning confident of mounting a challenge for pole position, Jewiss almost managed to deliver the top spot on the grid for race one with a time of 46.525 seconds (93.46mph) meaning he just missed out on pole by a mere 0.031 seconds. Tonteri was an excellent fourth overall, just a further 0.034 shy of his team-mate, with Alvarez 13th quickest.

From second on the grid, Jewiss got away well at the start and then spent the entire 26-lap race glued to the back of eventual race winner Ayrton Simmons’ car. With never more than a few tenths of a second between them, the Double R racer took the flag just 0.3 seconds shy of victory.

Finland’s Tonteri was edged back to fifth place on the opening lap and, like team-mate Jewiss, then spent the entirety of the season-opening contest on the short Indy Circuit in situ to secure second place in the Rookie Class on his car racing debut.

Alvarez slipped to the tail of the field off the start but mounted a strong fightback and after moving up into 13th place on lap three, he climbed back into the top 12 on the fifth tour. Pressuring Josh Skelton for several laps, the Mexican made the breakthrough at the halfway point of the race to take 11th position and ultimately finished just outside the top 10 – fourth in the Rookie class.

For race two, Tonteri lined-up third on the partially reversed grid with Jewiss sixth and Alvarez in 11th place. Tonteri concluded lap one in fourth place, with Jewiss shuffled back to seventh, while Alvarez dropped a couple of places to 13th spot.

On lap two, Tonteri slipped two more places to sixth just ahead of Jewiss and at the end of lap five the Safety Car was required when Alvarez’s race ended in the gravel at Paddock Hill Bend while running in 12th place. Racing resumed at the start of lap nine and two laps later Jewiss was up into sixth as Tonteri dropped down to ninth.

The Finn moved back into the top eight on lap 19 but, two laps later, his race was run with an unfortunate retirement. Jewiss, therefore, was the sole remaining Double R entry and he took the flag in sixth but was credited with fourth after the race as a result of time penalties for two rivals.

Rain arrived at Brands Hatch ahead of round three on Sunday, where Jewiss lined-up third on the grid, Tonteri was alongside in fourth and Alvarez was on the sixth row in 12th position. Off the start, Jewiss made his intentions clear as he pressured pole-starter Simmons and Dennis Hauger and the Double R rookie went on to move to the head of the field on the run to Graham Hill Bend.

Leading by almost a second into lap two, Jewiss started to press home his advantage but things then went slightly awry when a moment at McLaren dropped him back to third. Staying there until lap 18, Jewiss then gladly moved into second when Hauger ran through the gravel at Paddock Hill.

Determined to, at the very least, end the weekend back on the podium Jewiss maintained second behind race leader Simmons and did apply some serious pressure but had to settle for the runner-up placing at the chequered flag on lap 24.

Tonteri enjoyed his strongest race of the weekend in the final contest, holding fourth place until Hauger’s excursion which enabled the Finnish teenager to take third place. As well as securing his first outright podium, the result also delivered the Rookie class victory for the Double R racer.

Unfortunately for Alvarez, a possible challenge for a weekend-best top 10 went awry at the halfway point while running in 11th position. Battling hard with Lucca Allen, the pair managed to become entangled at Graham Hill Bend which triggered the Safety Car to enable both to be recovered.

Next on the British F4 calendar is a visit to Donington Park National Circuit on 28th/29th April for rounds four, five and six of the season. On the very same weekend, Double R will also be in action with its BRDC British F3 team at Rockingham in Northamptonshire for the second event of its season.