Team Peugeot debuts in WRX this weekend with Sebastien Loeb 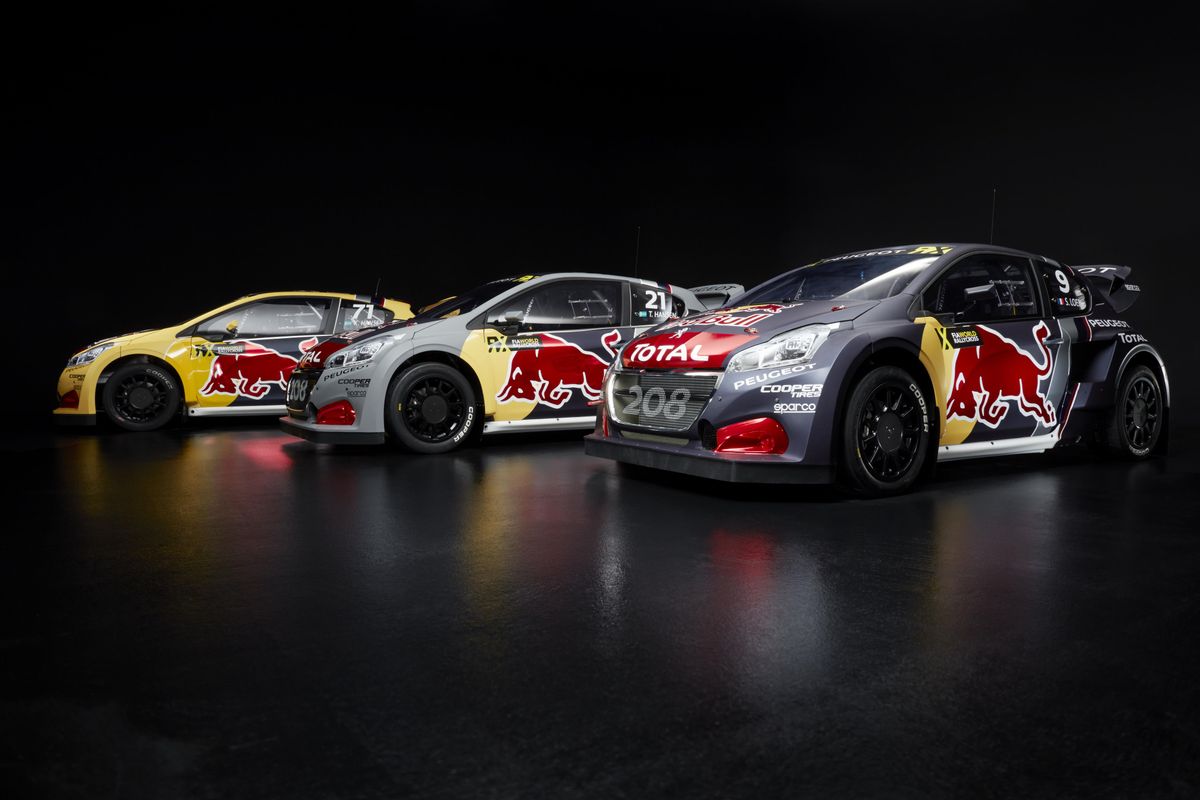 The 12-round FIA World Rallycross Championship gets underway in Barcelona this weekend, and with it the latest chapter in PEUGEOT’s motorsport history.

Team PEUGEOT Total enters World RX as a full manufacturer entry for the 1st time, fielding 3 cars in 3 different colours for 3 talented drivers. Nine-time World Rally Champion Sebastien Loeb, together with the Swede Timmy Hansen will be competing with the latest 560-horsepower PEUGEOT 208 WRX Supercar and will score points for the team. Up and coming youngster Kevin Hansen will race an evolution of the 2017 car within the individual entry category. All 3 PEUGEOT racing machines will be progressively updated during the season, with new evolutions currently being prepared by PEUGEOT Sport engineers at the factory.

After a shakedown on Monday in Versailles, France, preceded by previous testing sessions – such as the official session in Silverstone at the end of March - Team PEUGEOT Total hits the road for Barcelona, ready to tackle a completely new sporting challenge. While still relying on the Hansen family, the most successful dynasty in the discipline - with Kenneth Hansen (14-time European RX Champion) as Team Manager and Susann Hansen (the only female champion in European RX history) as Sport Coordinator - it’s now a full official PEUGEOT Sport squad that jumps into the discipline.
The 1st round of the season takes place on Saturday and Sunday (14-15 April) at the Circuit de Catalunya in Montmeló, north of Barcelona, the home of the Spanish Grand Prix in Formula 1, that has also hosted a rallycross circuit since 2015. The asphalt has been resurfaced since last year, delivering higher levels of grip than before, with a brand-new start section. The lap measuresa total of133 kilometres, consisting of 60.4% asphalt and 39.6% gravel. It’s one of the fastest tracks on the calendar, with the RX lap record currently standing at 42.971s from last year.
Bruno Famin, Peugeot Sport Director
“We’re a new team against some very strong and experienced opposition, with a growing level of manufacturer engagement. The first and biggest challenge we face in Barcelona is simply the one of preparing our own team – which has been largely formed from people whose most recent experience is in rally raids – for the very different demands of rallycross. There are plenty of new cars out there also, so the competition is tougher than it’s ever been. This weekend will be mainly a question of learning and training for the team. Then, as the year goes on, we are going to build up experience and improve, with the aim of winning races in the second part of the season.”

Kenneth Hansen, Team PEUGEOT Total Manager
“The feedback from the drivers is good and everyone is feeling positive. You can’t make a revolution over the winter, but you can get better and so we hope to fight. It’s sure that our rivals haven’t been standing still either, so it’s a difficult target and we have to be clever. There have been some big changes thanks to PEUGEOT coming in with some new people, but I see a huge eagerness and hunger from them for this fresh challenge, so Susann and myself are here to help them make this transition. Barcelona is a good track where you can really use the chassis and the engine. The new start section on the track is also a positive move I think, as it should lead to fewer incidents at the first corner.”

Sébastien Loeb #9 (French, born 26/2/74)
“Our shakedown was good, and it was useful for me to get back into the rhythm of driving a rallycross car again, even if in the end it’s quite different from a Dakar car or a World Rally Car, so I never have any big difficulty adapting from one car to another: it’s what I’ve always done. The test is also a good opportunity to try out different settings to see what works best, knowing also that we will consistently be bringing in new developments to the PEUGEOT 208 WRX throughout the year. I’m looking forward to Barcelona; it’s a nice place that I’ve always liked. In rallycross it’s always hard to set an objective in advance anyway, but especially at the first race of the season. So, I’m just going to do my best and see what happens.”

Timmy Hansen, #21 (Swedish, born 21/5/92)
“We are having a proper week-long build-up to the first race in Barcelona with a shakedown in France and then some testing. Obviously, you can’t make any big changes in just a few days, but you can join everything together and iron out any little things that aren’t perfect. The car feels quite familiar to me in a good way, as we’ve kept all the strengths from last year – with a really good balance and feel – but updated it in the areas where we wanted to find a bit more performance. Barcelona has always been a good track for me personally: I don’t think I’ve ever had a bad race there. The surface is high-grip and should suit our car well, but in the end, we have to treat it as a race like any other.”

Kevin Hansen #71 (Sweden, born 28/5/98)
“I feel really excited to start the season! I tried my factory car during the shakedown we and it felt good. Our recent tests are all about confirming the work that has been done over the winter and making some small adjustments so that we are completely ready for Barcelona. At the beginning of the season I’ll be racing a 2017-specification PEUGEOT 208 WRX but I am confident in the work that the PEUGEOT Sport team is putting in for the future. Barcelona is a track I really love: I have driven there in RX2 as well as Supercars, and it’s where I took my European title in 2016, so I only have good memories. I’m feeling positive: this is a great place for us to start the season and I’m determined to make the most of every opportunity that comes my way.”

WHAT IS RALLYCROSS?
Rallycross (WRX) is a mixed discipline combining rallying and circuit racing, held over a short lap that alternates sections on asphalt with sections on gravel. The very first races took place as part of the British Championship at the Lydden Hill circuit in England in 1967. A European Championship was created during the following decades, which led to the launch of the FIA World Rallycross Championship in 2014. The short and sharp format of the races attracts a young crowd and is tailor-made for video, social media and television. The objective for the championship is to go fully electric in the future

RACE & RULES
Each 2-day event begins with a lottery that determines the grid for the 1st of the 4 qualifying heats. Each car takes part in 1 race (lasting 4 laps) of each heat, with 3 to 5 cars starting together in a line. Based on the results from the 4 heats (given in points), the top 12 drivers proceed to the semi-finals. These are 2 races of 6 laps, with 6 cars in each. The top 3 cars from each semi-final move go through to the final, which also takes place over 6 laps. Championship points are awarded after the heats and in both the final and semi-finals. In every race, drivers are required to take the ‘joker lap’ once: an extra section of track that usually adds around two to three seconds to a lap time.