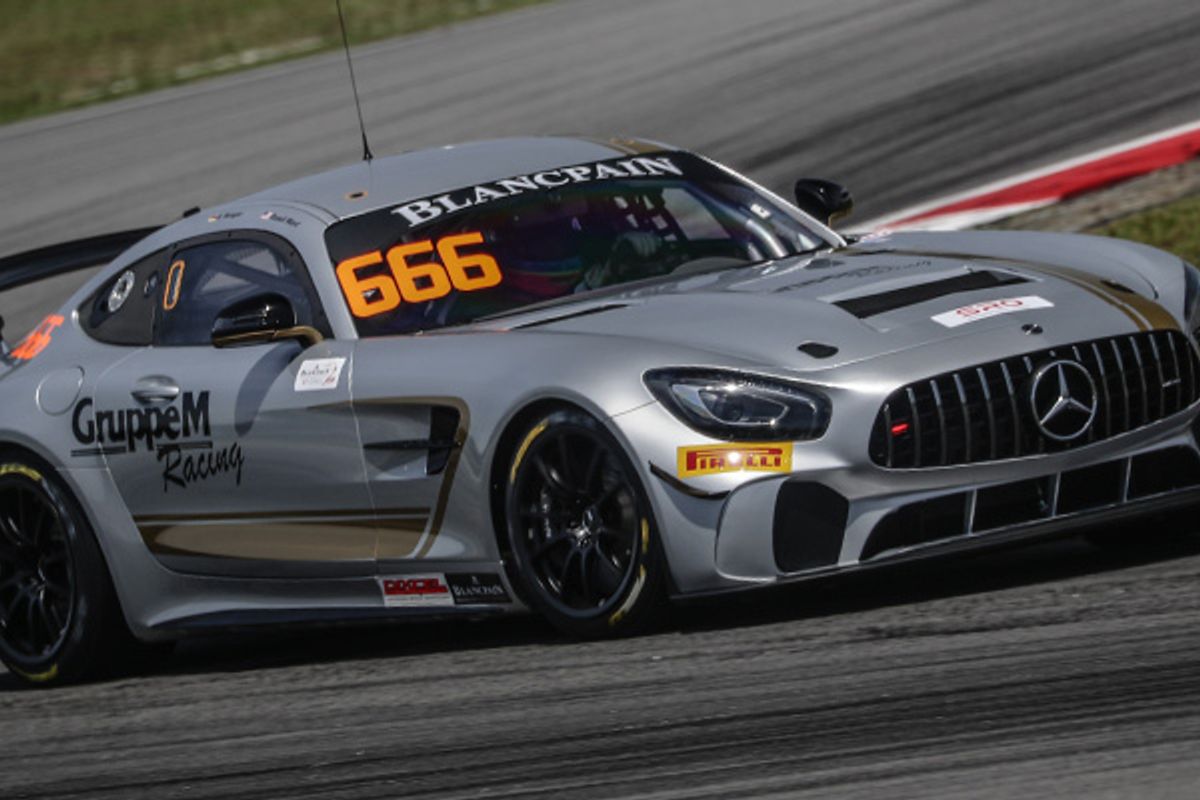 An early red flag to retrieve Hiroaki Hamaguchi’s stranded Lamborghini ensured no-one had set a time before the 15-minute session resumed with 11 minutes left on the clock.

Nico Bastian’s GruppeM Racing Mercedes-AMG slotted into third after lapping less than 0.2s slower than Lind, while Absolute Racing’s Franky Cheng was another tenth further back in fourth.

GruppeM’s second Mercedes-AMG set the fifth fastest time but starts first of GT3’s Pro/Am contingent courtesy of Brice Bosi, who out-qualified OD Racing’s Aditya Patel by 0.080s. Both start ahead of Edoardo Liberati’s KCMG Nissan, the fifth different manufacturer amongst a top-seven covered by as many tenths.

Anthony Liu – who won Sepang’s second race 12 months ago – completes the top-eight ahead of ARN Racing’s Hiroaki Nagai and FFF Racing’s Hamaguchi, who was able to resume qualifying after being retrieved from the gravel.

Elsewhere, Russell Ward gave GruppeM Racing and Mercedes-AMG their first GT4 pole in Asia thanks to a 2m16.770s. The American finished 0.754s ahead of Takayuki Kinoshita’s BMW Team Studie M4 and another 0.4s clear of Ringo Chong’s Team iRace.Win Mercedes-AMG.

Raffaele Marciello thus began the second segment with a 0.5s advantage thanks to his initial 2m03.000s lap. At that stage Josh Burdon had yet to register a meaningful time, but the Absolute Racing driver soon put that right by narrowly beating his GruppeM rival.

Factory AMG driver Marciello responded by wresting back provisional pole before Burdon sealed a sensational debut by lapping in 2m02.495s. That was sufficient to claim top spot by 0.382s and shave eight tenths from 2017’s qualifying benchmark.

In GT4 it was Team iRace.Win’s Gilles Vannelet who made good on his free practice promise by claiming pole position for Race 2. The Frenchman’s 2m16.634s was a tenth quicker than Ward’s Q1 time but, more importantly, 0.373s up on the American’s co-driver Reinhold Renger who starts second.

Race 2 starts at 11:50 on Sunday. Watch it and today’s opening race live on the championship’s website and Facebook page.

Fans across Asia and most of the world can watch qualifying and both races live and for free on Blancpain GT Series Asia’s website and Facebook page. US viewers can tune into Motor Trend On Demand, while Fox Asia and the Asiavision network will also broadcast both races live across the region.

*FNG’s Fox Sports / Star Sports channels are not currently being distributed in these countries however they may be reached by digital services or other media.

All GT3 and GT4 entries must adhere to the minimum pitstop time during both race’s mandatory driver changes (pit window open between minutes 25 and 35).

Pitstop success penalties are not applicable during the season’s first race. However, the top-three GT3 and GT4 finishers will incur 15, 10 and 5-second penalties to be served in addition to their Race 2 minimum pitstop times.