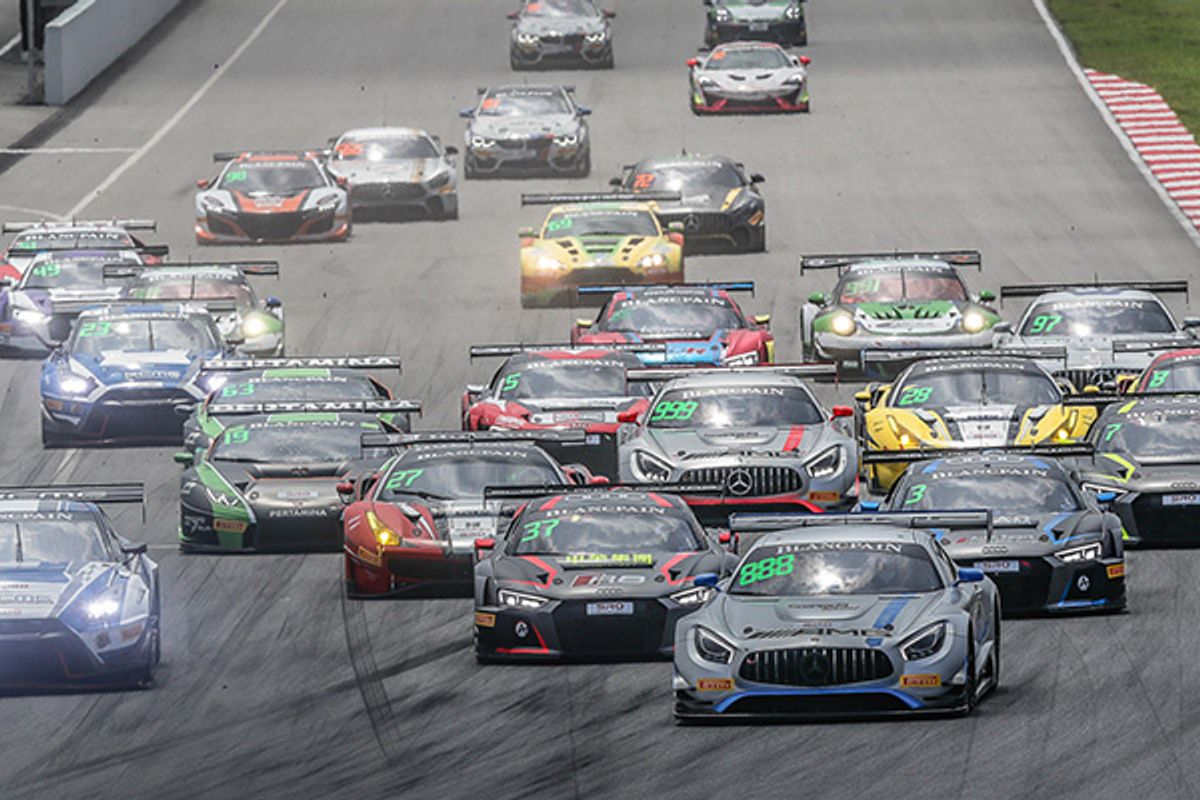 GT3: NO STOPPING BOSI AND MARCIELLO

The #888 Mercedes-AMG always looked like a victory contender after its podium in Saturday’s season opener, and so it proved after rapid stints from both Bosi and Marciello sealed a 26.6s victory over Anthony Liu and Josh Burdon’s Absolute Racing Audi.

The latter’s impressive pole lap on Saturday suggested fellow front row starter Marciello would have his work cut out, but the Italian never looked back after reaching Turn 1 ahead of his Australian rival. A three-second advantage at the end of lap one had become 12 by the time the pit window opened with 25 minutes gone, which was more than sufficient to overturn a five-second pitstop success penalty incurred for finishing third in Race 1.

The gap had grown further by the time Marciello pitted at the end of the 10-minute window, leaving Bosi with a comfortable 14s lead when he re-joined. From there it was plain sailing all the way to the finish.

Behind, Burdon spent the opening laps fending off KCMG’s Tsugio Matsuda before eking out a two-second gap ahead of the stops. That was sufficient for Liu to re-join in front of the Nissan, which actually dropped behind FFF Racing Team by ACM’s #63 Lamborghini after the stops.

That the Huracan was even in contention owed much to Marco Mapelli moving from ninth to fifth on lap one and clawing back further time by stopping late in the pit window. The task of keeping rapidly advancing Silver Cup cars at bay then fell to his co-driver Hiroshi Hamaguchi who spent the final laps desperately defending from Franky Cheng and Leo Ye Hongli. Incredibly, the Japanese driver held on to complete a Pro/Am clean sweep of the overall podium.

Meanwhile, Cheng’s Absolute Racing co-driver Martin Rump starred in the opening stint after his first lap was compromised by having to take avoiding action. Indeed, the Estonian dropped from fourth to 16th before staging an incredible fightback that gave Cheng a chance to finish where the #3 Audi had started, albeit just 0.4s behind Hamaguchi and less than one tenth ahead of HubAuto Corsa’s Ye.

But there was less to shout about for yesterday’s race winners Nico Bastian and Patric Niederhauser whose GruppeM Mercedes-AMG sustained damage on the opening lap.

All of that leaves Bosi and Marciello out front on 40 points, 14 more than Kodric/Lind and Liu/Burdon in joint-second.

Team iRace.Win’s Ringo Chong and Gilles Vannelet converted pole position into Race 2 victory at Sepang, but they were made to work for it by both BMW Team Studie and GruppeM Racing.

Just 0.150s separated Chong from Takayuki Kinoshita at the chequered flag after the BMW reeled in the Mercedes-AMG over the closing laps. That was after the Japanese driver and yesterday’s winner Russell Ward made contact following the pitstops, which ultimately denied the latter and his GruppeM co-driver Reinhold Renger a chance to challenge once again.

That followed a particularly entertaining opening stint between the same three cars. Vannelet held sway initially after starting on pole but was soon under pressure from Reinhold and Kinoshita’s co-driver Sunako Jukuchou. The GruppeM Mercedes-AMG eventually found a way past but couldn’t build enough of an advantage to overcome its full 15-second success penalty.

Chong/Vannelet and Ward/Reinhold share the championship’s top spot after the opening weekend, while Yu/Merlin are 10 points behind in third.

Chang International Circuit in Thailand hosts round two of this year’s championship on May 12/13.

DRIVER QUOTES
Brice Bosi, #888 GruppeM Racing Mercedes-AMG GT3: “It’s been a great weekend for us and the team, and to be leading the championship on my debut really is something special. Raffaele [Marciello] did the hard bit by building a gap and clawing back the success penalty. He can’t be with us in Thailand but Maxi [Buhk] knows the team, car and championship from last season, plus we have also worked together in the past, so we should be in the mix again.”

Ringo Chong, #72 Team iRace.Win Mercedes-AMG GT4: “I must say that it’s very different this year with all the new cars and drivers – the level has definitely increased. We had a gap after the pitstops, which was important because I’m suffering from flu this weekend and I knew things would get harder. Then the team started counting down the gap to the BMW behind: six seconds, five seconds, four seconds. I could see his lights in my mirrors, so I knew where he was until he turned them off, which was very sneaky! Maybe with one more lap he would have had me.”