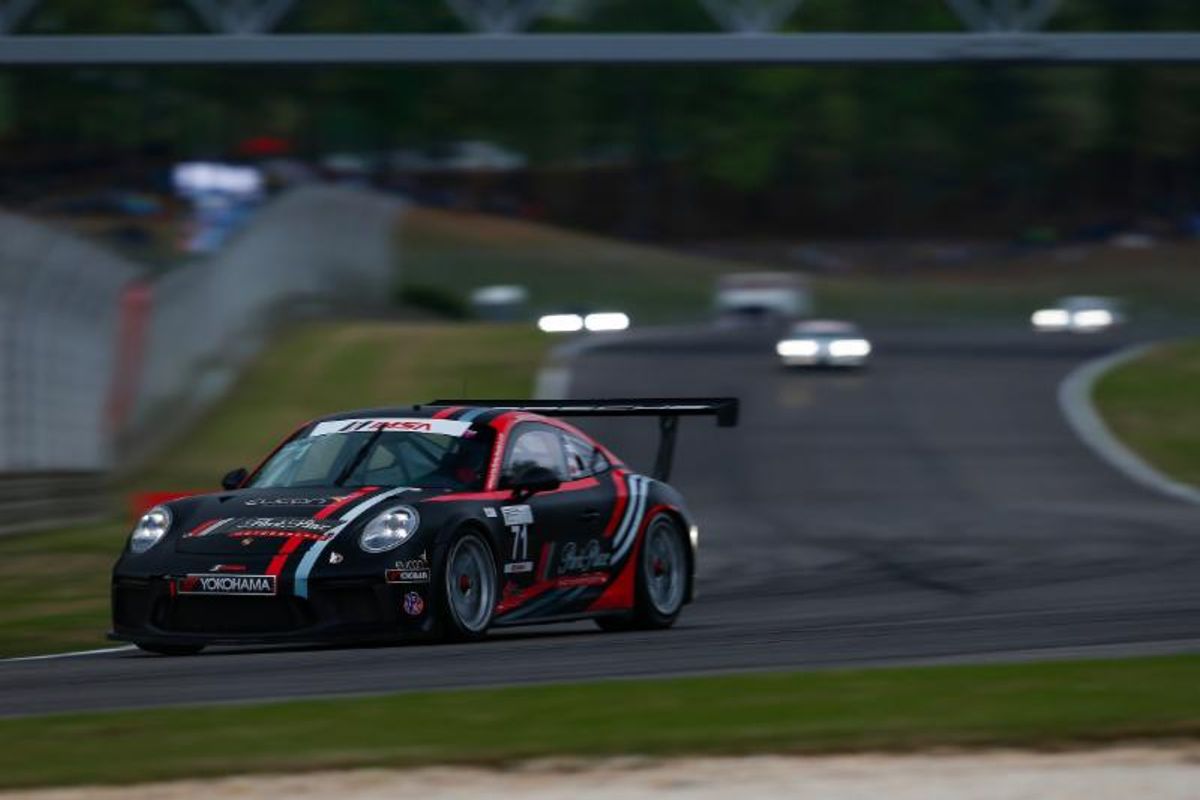 If you look at the entry list for next weekend’s Porsche GT3 Cup Challenge USA by Yokohama doubleheader at Mid-Ohio Sports Car Course, you’ll see a 21-car field consisting of 15 Platinum Cup entries – which are all Yokohama-shoed Porsche 911 GT3 Cup race cars built in either 2017 or 2018 – and six Gold Cup entries, which also use Yokohama tires and are 911 GT3 Cup cars built between 2014 and 2016.

If you look a little bit closer, you’ll find 16 drivers from the United States, two Canadians, and one driver each from Mexico and Puerto Rico, which is a U.S. territory. In short, it’s a whole bunch of North Americans.

That is except for one driver. David Kolkmann is a 21-year-old racer who hails from Munster, Germany, competing in his first GT3 Cup Challenge USA season in 2018. He drives the No. 71 Park Place Motorsports Porsche in the Platinum Cup class, and last weekend at Barber Motorsports Park, Kolkmann picked up his first series victory.

The GT3 Cup Challenge USA is one of 21 Porsche single-make Cup Challenge series in the world. At least eight of them are closer to home for Kolkmann than this series, which begs the question. Why would come halfway around the world to go racing?

“I got to the series with Patrick Lindsey,” said Kolkmann. Lindsey is both the team owner and one of the drivers for Park Place Motorsports, a race-winning program in the IMSA WeatherTech SportsCar Championship GT Daytona (GTD) class with its No. 73 Porsche 911 GT3 R.

This year, Lindsey is competing in selected WeatherTech Championship events in addition to racing in the FIA World Endurance Championship with Project One, a German team.

“Patrick is driving for my old team in WEC this year,” Kolkmann continued. “It’s sort of a cooperation with my old team and Park Place Motorsports now, so we decided to make the step to America.”

It’s a step that already seems to be paying off for Kolkmann. In addition to winning last Sunday’s race at Barber, he finished second to race-winner Roman De Angelis in the first race of the GT3 Cup Challenge USA Barber doubleheader last Saturday. Through four of 16 races, Kolkmann is fifth in the Platinum Cup championship standings, trailing leader Trenton Estep by 19 points heading into the pair of Mid-Ohio races on May 5-6.

“I think the top five guys are pretty strong,” Kolkmann said. “We can fight a good fight. I had bad luck in [March’s season opener] in Sebring. I was fighting for the top positions, but then I had an engine failure in the first race and couldn’t finish the second race. But now, I think we did a good job this time, so I like it.”

He also likes the variety of racetracks he gets to race on in the United States. Each one presents a new and unique challenge.

“I am having fun,” he said. “I mean, every track is new to me. It’s a challenge every time I come to a new track. For example, at Mid-Ohio, I only have two practice sessions to learn the track. I’ll have to get up to speed really quick, but that’s fun.”

Kolkmann uses a combination of YouTube videos and simulator time to familiarize himself with each of the tracks before he gets there. That seems to be working, as he has earned top-five starting spots for all four races so far.

“You can’t really tune the setup on the sim,” he says. “But you can play with some lines, turn later, turn earlier for different corners. That’s what I did just to get a rough idea about the track.”

He hopes to use his experience in the GT3 Cup Challenge USA this year as a springboard to even bigger things in the years ahead. It was a strategic move in a variety of ways for him to come to the U.S. this year.

“My goal is to become a factory driver one day,” he said. “My goal is also to run in IMSA, for example, GTLM, GTD, whatever. That’s something I want to do in the future. Maybe I can do the step next year.

“With my old team, which is a cooperation, they run the RSR in the WEC now, so we have – sort of – all the steps now. We have the GT3 Cup car now, we have the GT3 R and we have the RSR, so it could be a good future. I just have to bring the results, but we are in a good way.”

The Porsche GT3 Cup Challenge USA by Yokohama is one of four IMSA-sanctioned series participating in the Acura Sports Car Challenge at Mid-Ohio weekend – which is headlined by the two-hour and 40-minute WeatherTech Championship race on Sunday, May 6. Tickets are available now at MidOhio.com.