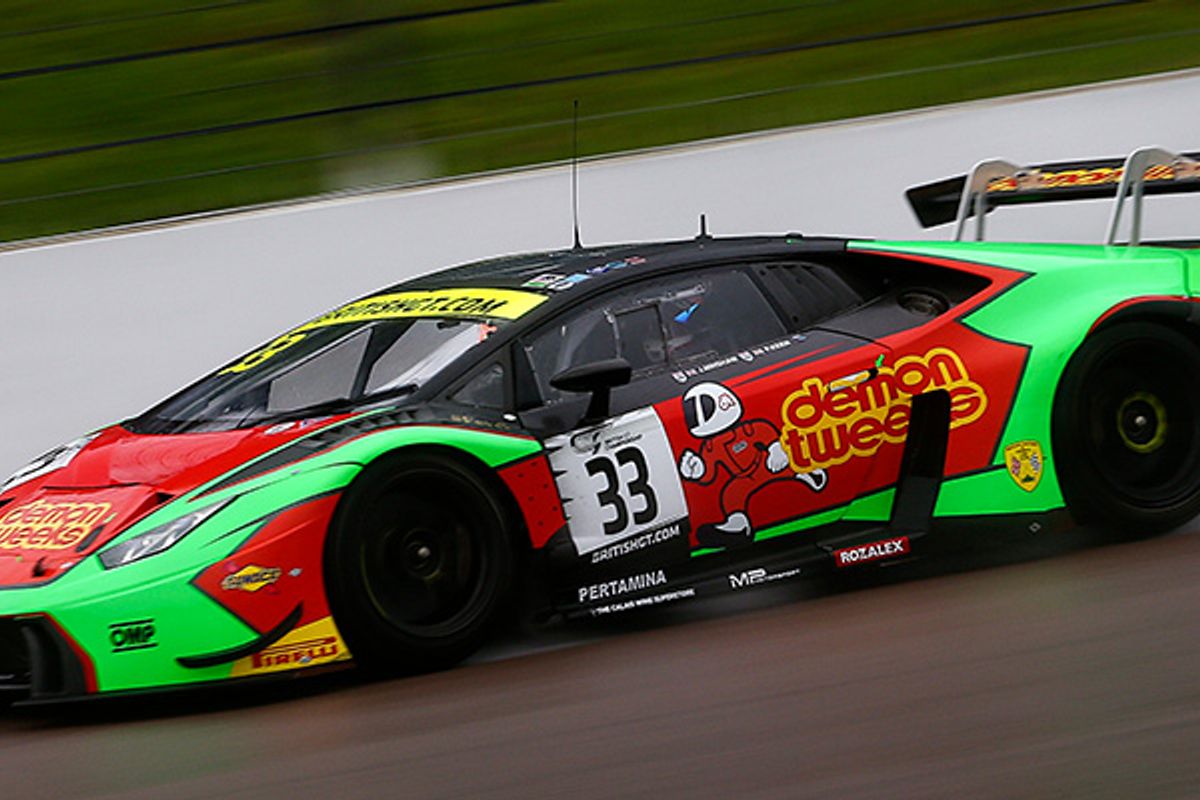 A wet but gradually drying track ensured times tumbled throughout both 10-minute qualifying sessions, which witnessed two standout performances. First, Haigh and Minshaw – who recovered from an early spin – duked it out throughout the Am segment before the Optimum Aston Martin driver produced a stellar final run to claim provisional pole by almost a second.

Ordinarily that would have been enough, but that was without reckoning on Keen who turned the tables on Adam in the subsequent Pro session. Indeed, Barwell’s Pro driver proved the class of a top-quality field en route to 1m29.235s, which helped Barwell’s #33 Lamborghini finish 0.692s clear of Adam and Haigh in the combined timesheets.

Farmer was part of the same incident that saw Minshaw spin in the first session, but he also recovered from a similar pirouette to post the fourth quickest Am time. TF Sport co-driver Nicki Thiim ensured that became third in the final standings after getting the better of RJN Motorsport’s Struan Moore. Jonny Cocker also nosed ahead of the Nissan to leave Barwell’s second Huracan fourth after Sam De Haan had initially qualified fifth.

Free practice pace suggested ERC Sport’s Mercedes-AMG should have been a factor. However, Lee Mowle’s early excursion meant the team failed to set a combined qualifying time, although Yelmer Buurman hinted at what might have been by running Keen closest in the subsequent Pro session.

The die was cast during the first 10-minute session when Fagg’s late flier gave the #4 crew a 1.2s headstart over the sister Silver Cup McLaren driven by Lewis Proctor, who also bided his time before jumping up the order. Both McLarens knocked Century Motorsport’s erstwhile pace-setter Ben Green down to third, albeit by just 0.041s, while HHC Motorsport’s Patrik Matthiesen claimed fourth.

Track-Club’s championship leader Adam Balon produced an incredible lap to once again lead the Pro/Am contingent in fifth overall, while Alex Quinn was another eye-catching addition to the provisional top-six aboard the first of Steller Motorsport’s Toyota GT86s.

But any hopes the rest might have had for Q2 were soon dashed by O’Brien who backed up Fagg’s earlier provisional pole time by producing the second fastest time of the session. The pair’s combined time was therefore 1.968s quicker than the sister 570S driven by Albert, who similarly extended his advantage over Ben Tuck’s #42 Century BMW. 0.4s covered second and third at the chequered flag before a three-place grid penalty – imposed for a Q1 yellow flag infringement – dropped the M4 to sixth in the final standings.

Ben Barnicoat backed up Balon’s good work by moving Track-Club’s McLaren up one place to fourth – which subsequently became third – ahead of Callum Pointon, whose HHC Ginetta he shares with Matthiesen slipped back one position. That could be crucial tomorrow when the Pro/Am entries benefit from a 20s-shorter minimum pitstop time.

Joe Osborne might only start 13th but, just like his team-mates on the front row, Tolman’s #56 Pro starred in qualifying en route to fastest time overall. His best of 1m34.775s was 0.3s quicker than O’Brien.

Today's two-hour race – the first to award points-and-a-half this season – gets underway at 13:10. Watch it live on British GT’s website and Facebook page, as well as SRO’s GT World Youtube channel.

DRIVER QUOTES
Phil Keen, #33 Barwell Motorsport Lamborghini Huracan GT3: “The track was improving every lap, getting drier and drier, but Barwell and Lamborghini have also done a great job. We’ve got a 20s success penalty for winning at Oulton so we’re praying for rain to have any chance. Otherwise it’s about salvaging points for the championship fight. We’ll just have to do the best we can.”

Charlie Fagg, #4 Tolman Motorsport McLaren 570S GT4: “Initially it was about finding a clear space amongst the Am drivers, and when I did my attention turned to cracking on! The McLaren was unbelievable to drive, plus the track had definitely dried up after FP2. We saw that watching the GT3 session so it was important to jump in and get the job done. I got a banker lap in early and felt confident of pushing on after that. I’m also really happy for Mikey [O’Brien]: yeah, mega!”