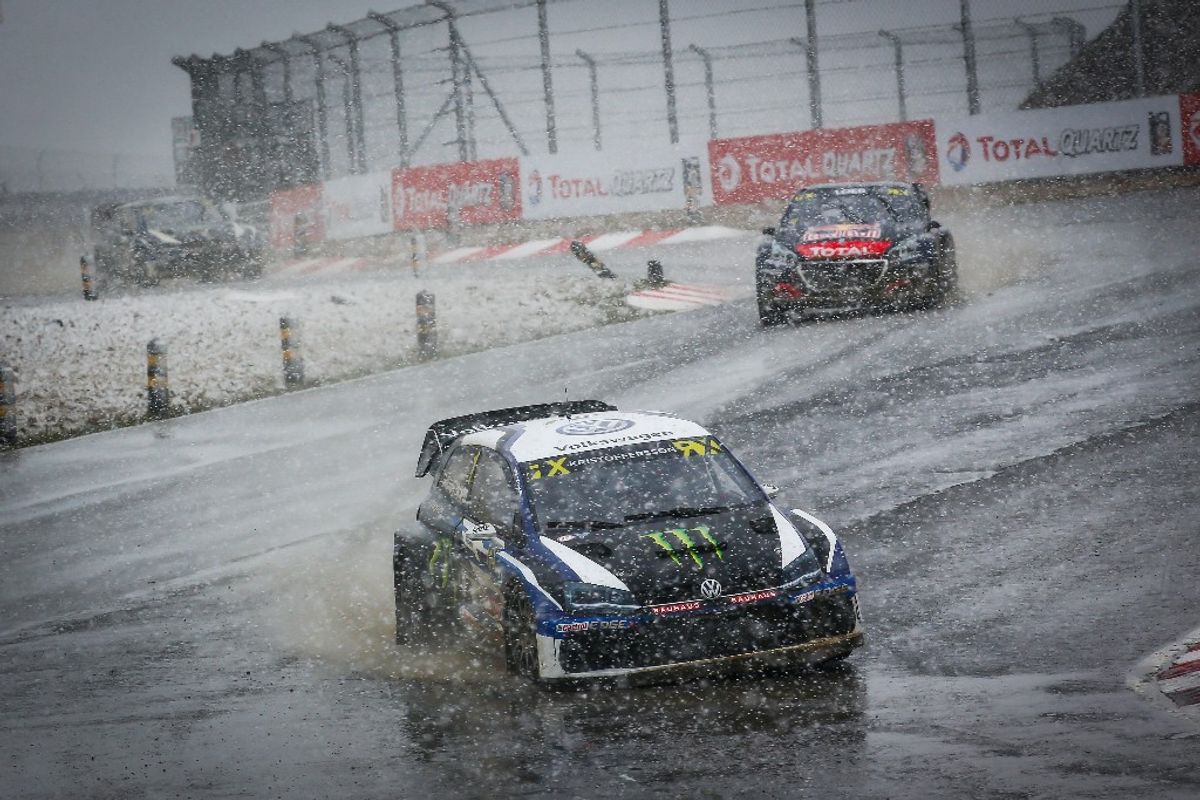 Johan Kristoffersson extended his lead in the FIA World Rallycross Championship presented by Monster Energy after taking his second straight win of the season in the Bompiso World RX of Portugal. Sebastien Loeb finished second for Team Peugeot Total with Petter Solberg placing third for PSRX Volkswagen Sweden in the final, which was run in a blizzard at the end of a weekend of mixed weather.

Kristoffersson led the final into turn one and, with the benefit of clear vision, drove confidently away from his rivals as the battle for places raged behind him. Backing up his round one win in Catalunya-Barcelona, Kristoffersson is now nine points in clear in the lead of the Championship.

"I felt like I had great pace all weekend and from the semi-final my PSRX Volkswagen Sweden Polo R worked very well," commented Kristoffersson, who won his first World RX final in Portugal three years ago. "It was snowing in the final and it was very, very slippery but I had a great launch and was able to get into the first corner in the lead. From there I just kept pushing as hard as I could for five laps so I could take the Joker on the last lap."

Loeb consolidated Team Peugeot Total’s strong performance over the course of the weekend with his run to second place in the final. The Frenchman and team-mate Timmy Hansen won two qualifying races and a semi-final between them. Loeb took the Joker in lap one and climbed to second place as the race progressed.

"I had a really good start and went for the Joker straightaway," said Loeb, who won the Monster Energy Super Charge Award for the quickest reaction off the line. "It’s been a great weekend for Peugeot and I am very pleased to be on the podium again. I had a really good feeling in the car from the start and felt confident in all conditions."

Solberg joined Loeb in taking his Joker early before chasing his rival all the way to the chequered flag for his first podium of the season. The two-time World RX Champion acknowledged the wild weather was a test of his considerable experience.

"We have had just about every type of condition," he said. "I competed in rallying for many years and I know how to drive in the snow, on gravel, wet mud and asphalt. But until I came to Montalegre, until I came to World RX of Portugal, I have never driven in all of those conditions in one day. It was unbelievable to be racing in a snow storm, but quite cool as well!"

Andreas Bakkerud was Top Qualifier and went on to place fourth in the final driving the EKS Audi Sport S1. The Norwegian claimed dominant wins in both Q3 and Q4 to leapfrog overnight leader Loeb in the Intermediate Classification but just missed the podium in the hotly contested final.

Making a career-first appearance in a World RX final, Guerlain Chicherit completed his landmark weekend with a run to fifth. A breakthrough result for the GC Kompetition team, Chicherit produced a superb performance in semi-final one to guarantee his route to the final as the Prodrive-engineered Renault Megane RS proved competitive in the Frenchman’s hands.

Timmy Hansen started on the front row alongside Kristoffersson after winning semi-final two, but a mid-race spin coming out of the final corner scuppered the Swede’s hopes of a podium and dropped him to sixth place.

Last year’s World RX of Portugal winner Mattias Ekstrom didn't progress beyond the semi-finals. The 2016 World RX Champion was in the thick of the action at the start of the race but was denied a place in the final by the in-form Chicherit.

In the FIA European Rallycross Championship for Super1600, Artis Baumanis claimed his second consecutive victory in the Volland Racing Skoda Fabia. A lowly 12th place overnight, the Latvian driver fought back to make his way to the final where he’d get the better of Espen Isaksaetre (Norway) in his Peugeot 208 and Ondrej Smetana (Czech Republic) driving his Ford Fiesta. With two of the six Super1600 rounds completed, Baumanis tops the championship standings, five points ahead of team-mate Rokas Baciuska.

Paul Bellamy, World RX Managing Director for IMG, commented: "Montalegre never fails to disappoint when it comes to enthralling racing, and this weekend’s World RX of Portugal has been absolutely no exception. Though the unseasonably cold and snowy weather certainly presented its own challenges as it changed quickly from session-to-session, the racing remained high quality throughout. Congratulations to Johan Kristoffersson and PSRX Volkswagen Sweden for their second win of the season – you can definitely say it was hard-earned on a day like this! Finally, thank you to the Montalegre organisers and the Portuguese ASN for putting on the event in very testing conditions – 25,000 fans have enjoyed fantastic racing in a spectacular location.”

The 2018 FIA World Rallycross Championship presented by Monster Energy will continue with World RX of Belgium at Mettet in two weeks’ time (12-13 May).