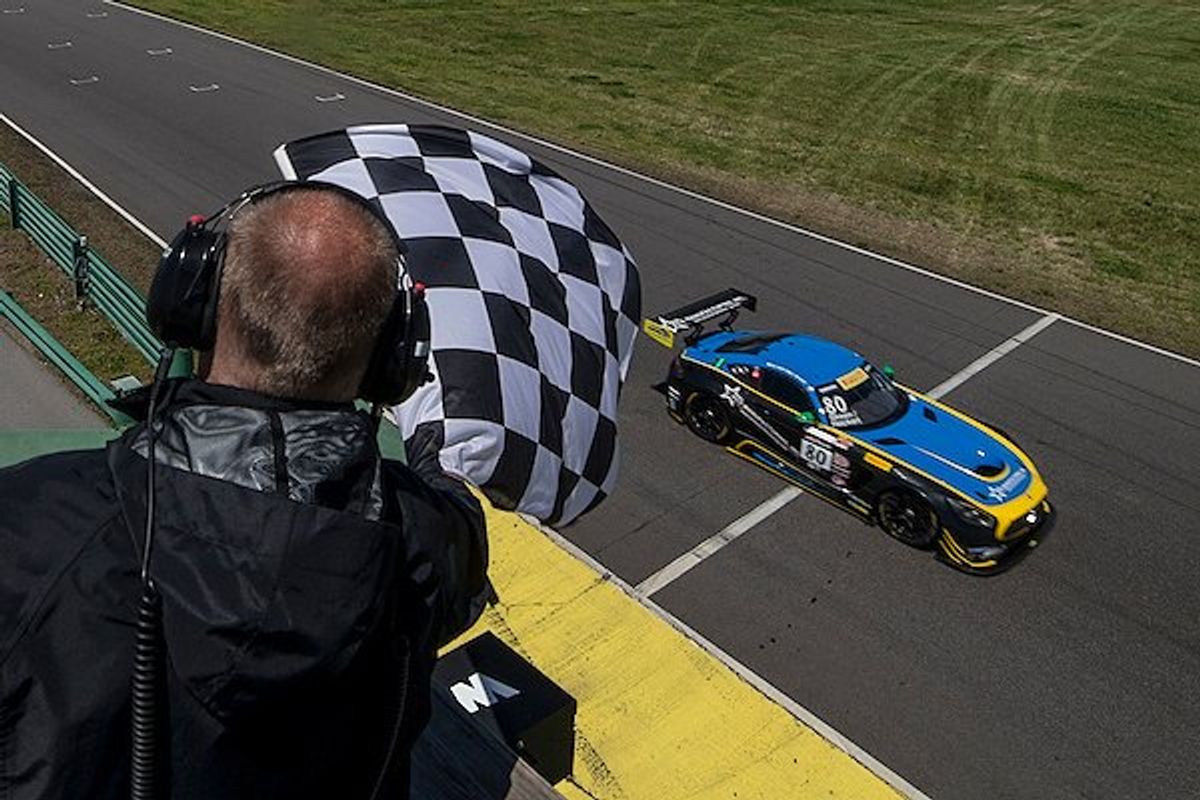 Mercedes-AMG Motorsport Customer Racing teams in both the GT and GTS classes turned in a competitive performance this weekend in the Pirelli World Challenge SprintX event at VIRginia International Raceway (VIR) that was highlighted by a Sunday overall and GT-Pro victory by co-drivers Mike Skeen and Scott Heckert in the No. 80 Lone Star Racing Mercedes-AMG GT3.

The win followed the first front-row qualifying sweep for the Mercedes-AMG GT3 in North American competition on Saturday that saw Skeen join the pole-winning No. 2 CRP Racing Mercedes-AMG GT3 of Daniel Morad on the front row for Race 1 of the weekend doubleheader.

Edging Skeen on his final qualifying lap by just .088 of a second, Morad’s time of 1:41.953 is a new Pirelli World Challenge GT record on the 3.27-mile VIR circuit.

The Mercedes-AMG GT3 is a perfect two-for-two in Pirelli World Challenge SprintX qualifying this season. Skeen won the pole in the Lone Star Racing No. 80 in the season-opening doubleheader at Circuit of The Americas (COTA) in March.
After a challenging Saturday opener for both teams, Race 2 on Sunday moved off to fast start for both CRP and Lone Star. Morad’s co-driver Fabian Schiller took the lead at the race start while Heckert quickly jumped from fifth to fourth place.

Schiller led every lap of his stint but a loose front splitter on the No. 2 created some handling issues for closing driver Morad. The No. 2 car ultimately crossed the finish line in fourth place.

Heckert handed off to Skeen and, after a perfectly timed pit stop, the No. 80 returned to the race just behind the overall leader. Skeen steadily closed and made the winning pass in the run through Turns 3 and 4 just under three minutes from the end of the race.

The win was the first for Lone Star Racing’s Mercedes-AMG GT3 in the team’s second year with Mercedes-AMG Motorsport Customer Racing.

A third Mercedes-AMG GT3, the No. 63 DXDT Racing entry, also raced at VIR with David Askew solo-driving to second-place results in each of the weekend’s GT Am races.

In GTS, Robinson Racing and Murillo Racing combined to give the Mercedes-AMG GT4 its first pole and first one-two qualifying result Saturday in the car’s debut season of North American competition.

The best result for each team in the weekend’s pair of races was sixth in Pro/Am Saturday for Lewis and Robinson and eighth Sunday for Fassnacht and Szymczak.

Next up for Mercedes-AMG Motorsport Customer Racing teams is this weekend’s IMSA WeatherTech SportsCar Championship race at Mid-Ohio Sports Car Course, May 4 – 6.

The next Pirelli World Challenge event weekend is May 18 – 20 at Canadian Tire Motorsports Park.

Mike Skeen, Driver – No. 80 Lone Star Racing Mercedes-AMG GT3: “The Mercedes-AMG GT3 was great. We had good, long-run pace and I was doing qualifying laps the whole stint and the car was incredibly consistent and fast. It was awesome all the way to the end. The crew did a great job preparing the car, maximizing the setup and doing a perfect pit stop. Scott had an awesome starting stint and then it was just my job to go hunt down the last couple of guys. I was able to get a pass done for the lead right at the end and it was great to end the weekend on such a positive note.”