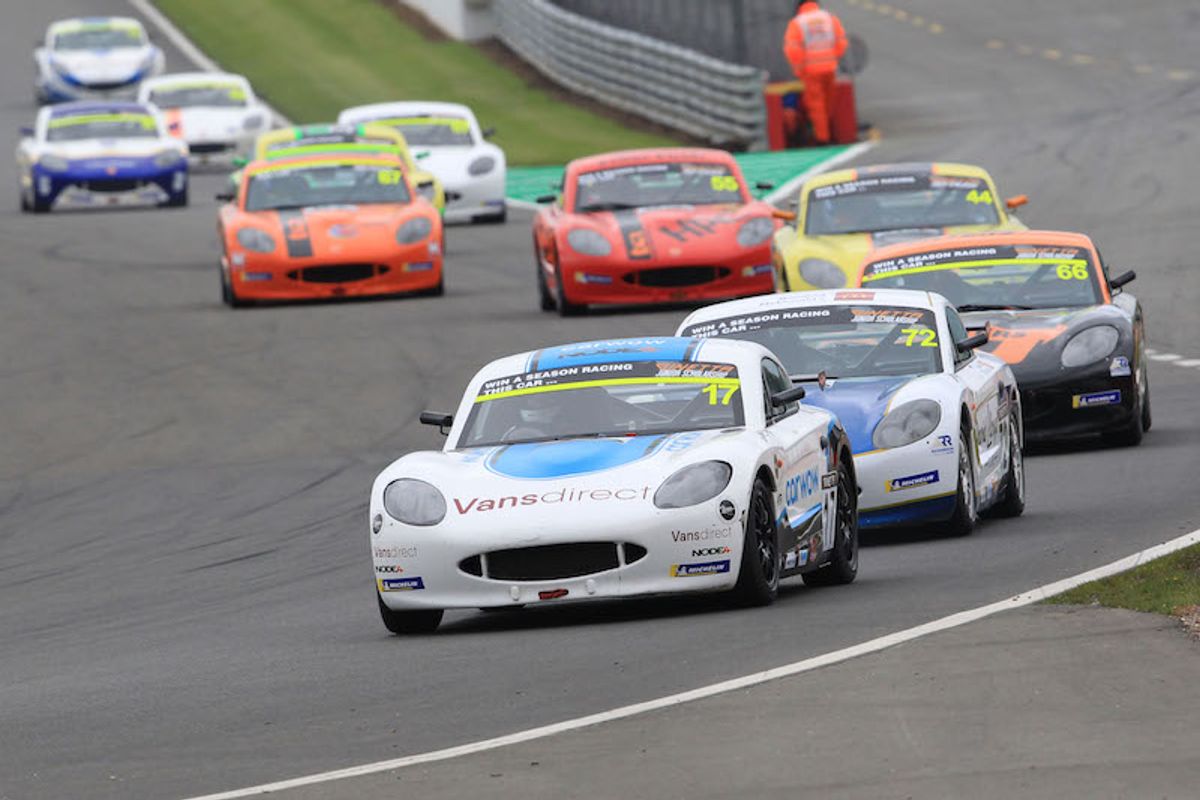 Louis Foster enjoyed the best weekend of his racing career to date at Donington Park with an impressive maiden victory in the second meeting of the Ginetta Junior Championship season.

The 14-year-old from Odiham in Hampshire started the weekend well with a strong performance in pre-event testing, where he came close to topping the times at the wheel of his Elite Motorsport-run car.

The Lord Wandsworth College student mastered tricky wet conditions when qualifying arrived on Saturday morning to secure third on the grid for the opening nine-lap encounter.

Battling ahead of squabbling duo of Adam Smalley and Luke Browning on lap one, Louis found himself in the early lead of the race but then made a slight mistake into the final corner at the end of lap two that dropped him back down to third place.

Embroiled in a three car fight with Smalley and Browning for the lead in the laps that followed, Louis moved up into second spot with a fine move at turn one on the fourth lap and would ultimately end the race in the runner-up position for his best result in the series to date and a first outright podium.

The second race of the weekend would be held on a drier circuit but with plenty of damp patches that could catch out anyone who wasn’t fully focused on the job at hand.

Although he made a good start when the lights went out, Louis would lose places when forced wide and slipped back to sixth place but it didn’t take long for him to start working his way back up the order.

Picking off the drivers ahead, he was back into the top three by the half way stage and then brought his car to the finish for another podium finish and another rookie class win.

The final race of the weekend on Sunday saw Louis start from third on the grid and he maintained his position through a hectic opening lap before being demoted to fourth on lap two.

Reclaiming third within a lap, Louis then became embroiled in what would become a four-car battle for the lead – hitting the front on the fifth lap when two of the drivers ahead clashed at McLeans.

Unable to relax under pressure from Luke Browning, Louis produced a masterful drive to keep the championship leader at bay through to the finish, quickly reclaiming his advantage when Browning did briefly get ahead on lap seven.

It meant a first overall win for Louis in the series and a fifth rookie success in as many races, whilst he also now sits second in the championship standings.

“It’s been a fantastic weekend and I’m delighted to end it with my first overall win,” Louis said. “We knew we had a good car after being right at the sharp end of the the times in testing, but then the rain arrived on Saturday.

“To get third on the grid was good and in the opening race it looked like I had a good chance of pushing for the win until I made a small mistake at the final corner, which cost me valuable time. To still get on the podium was a good result and then race two was full of action. I really had to get my head down when I was forced wide and to fight back to the podium showed our pace.

“As for the final race, it was just crazy from start to finish. In the early stages I wasn’t sure that we had the pace in the car but I knuckled down and got stuck in. When I got to the front, I knew it wouldn’t be easy to keep Luke behind as we broke away from the chasing pack, and when he did manage to make a move for the lead, it was vital I fought back straightaway.

“When I got back into the lead for a second time, I wasn’t going to lose it and I’m over the moon to have taken the victory. I have to give huge thanks to everyone in the Elite Motorsport team, and also to my sponsors Vans Direct, Wake Nutrition and Carwow as I wouldn't be able to do it without their support.

"This weekend has given me another boost to my confidence and I’m looking forward to Thruxton next time out to try and maintain my current form.”