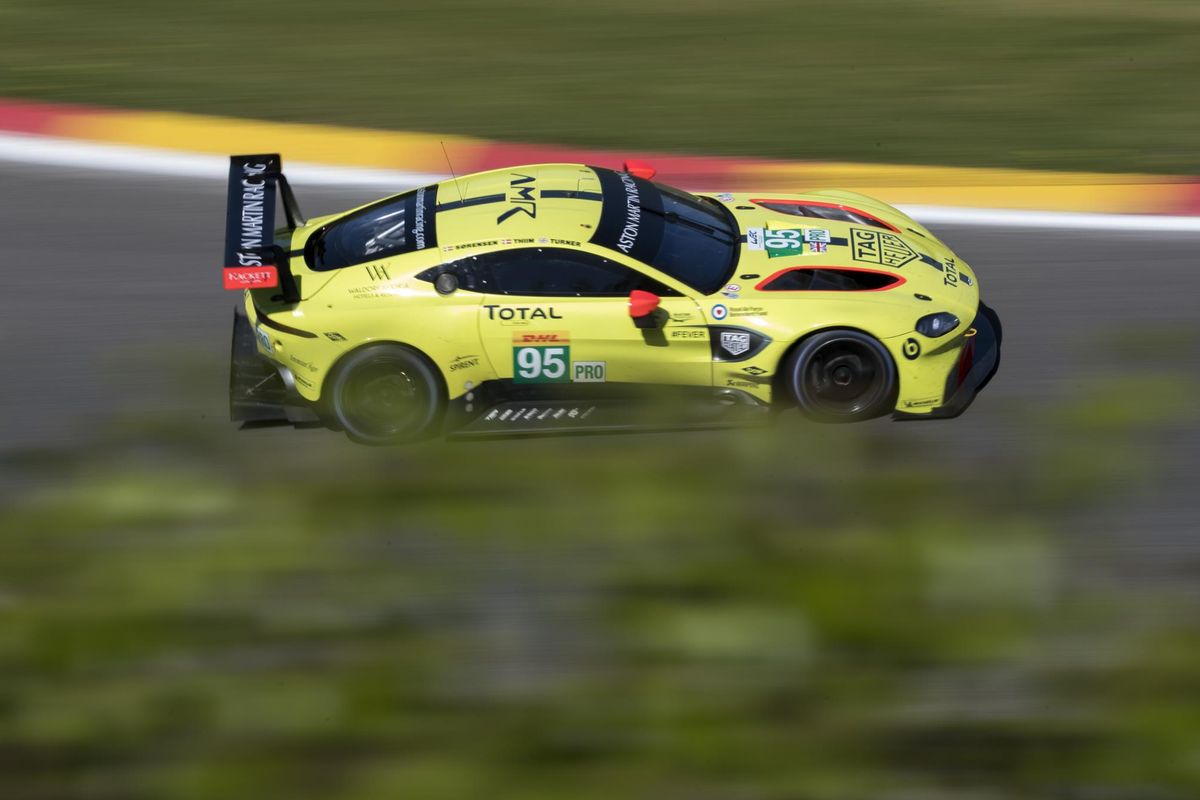 Aston Martin Racing’s Vantage GTE has made its qualifying debut at the FIA World Endurance Championship’s season opener, the TOTAL 6 Hours of Spa-Francorchamps, in Belgium.

The new racecar – based on the critically acclaimed new Vantage – carried drivers Maxime Martin (B), Alex Lynn (GB) and Jonny Adam to P8 in the #97 entry, while the sister #95 car of Nicki Thiim (DN), Marco Sorensen (DN) and Darren Turner (GB) will start from P10 in the GTE Pro class.

Afterwards the team expressed satisfaction at a trouble-free weekend so far with a car that represents the first all-new machine from Aston Martin Racing in more than seven years, with expectations that race-day should see a further step forward in performance.

Aston Martin Racing debutant Alex Lynn, who qualified the #97 car alongside Max, said: “It was a really positive day. We had done a lot of preparation coming into this race and our main objective was to execute a well-drilled qualifying session from Maxime and myself. The car is in its infancy, and as a team it is all about ramping up the intensity before we get to Le Mans next month. So while tomorrow is an important day to ensure we score points for our world championship campaign, we also need to prepare for our Le Mans 24 Hours attack.”

The team’s other newcomer Martin added: “We’ve tried hard to optimise what we have and put everything together, but obviously we still need to find some outright pace. It is a long six-hour race, so our aim is to have a flawless race and maximise execution as a team. It’s a long season so we will see how things develop.”

The 2016 FIA WEC GTE Pro champion Nicki Thiim, who qualified the #95 ‘Dane Train’ with Marco Sørensen, said there was much satisfaction to be derived from giving the Vantage GTE its long-awaited competitive debut: “The feeling to go out there and drive the new ‘weapon’ with low fuel and new tyres was tremendous. There is a lot of improvement through the field and it’s clear we have to work hard to beat them and that is how it should be. It’s a super-competitive championship and that’s why we race in it. Tomorrow is a different thing regarding tyre wear, and pushing the car to the limit. That is what we have been working on and we will be stronger in the race.”

In the GTE Am class, the team’s faithful V8 Vantage GTE propelled drivers Paul Dalla Lana (CN), Pedro Lamy (P) and Mat Lauda (A) to a strong start to their season. Starting the race from P2, Lamy and Dalla Lana delivered an average lap time just 0.002 seconds from pole.

After winning last year’s GTE Am title, the trio were buoyed by their quick return to form after the long off-season.

Paul Dalla Lana said: “This year is going to be tough because the quality in the field has gone up. It’s so great to be in Spa on a sunny day; this is why we race. We came into the weekend with some worries on our mind where we might stack up so to be so close to pole is a good thing. We have a line-up that can compete and we have a chance. We might not have the outright pace but in a six-hour race that’s only part of it.”

John Gaw, Aston Martin Racing Managing Director, summed up qualifying: “Our focus this weekend is on execution and making sure that we optimise in all areas. So no technical issues, nothing that delays us on track, no errors in the pit lane, these are our primary objectives. We’ve put together the best strategy and optimised set-up and have focussed on getting the most out of our technical partnerships with Michelin and Total. So far this weekend we have achieved all of the above and we are running exactly to the parameters the FIA and ACO has asked us to initially run with this new car.”