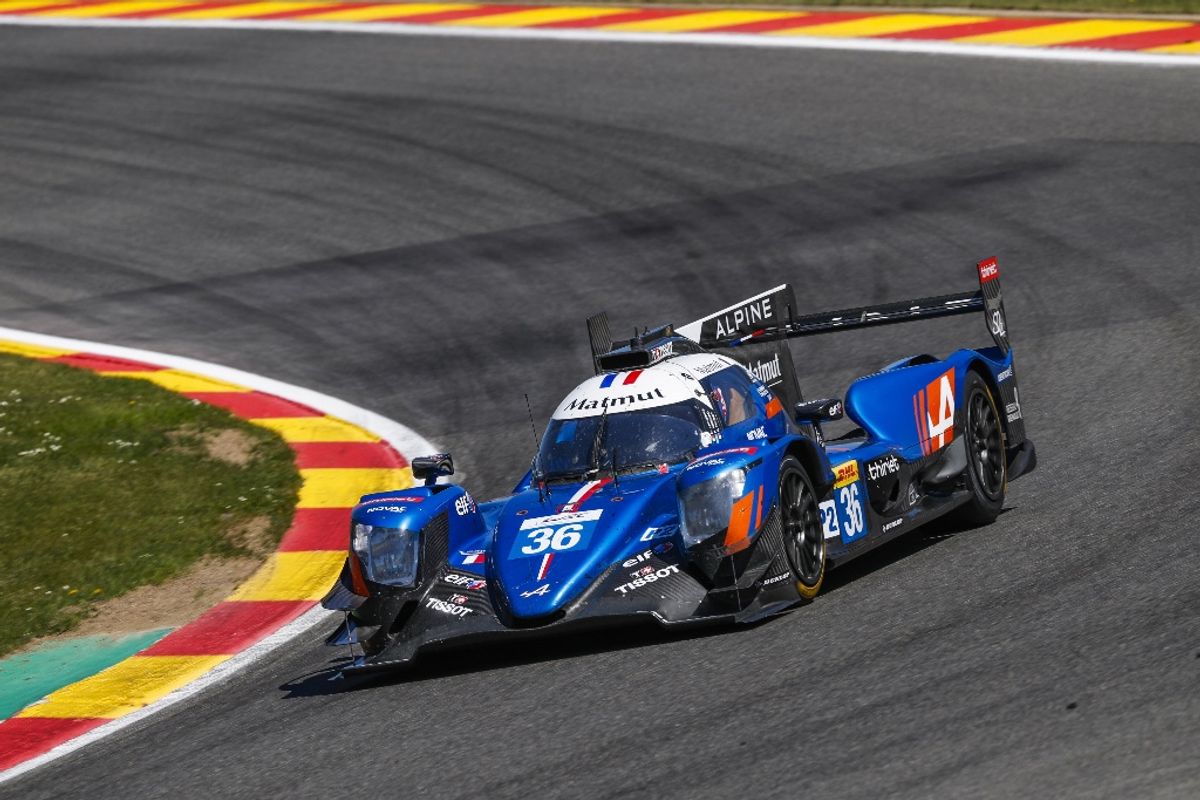 Signatech Alpine Matmut got the first pole of the year in the LMP2 category.
Despite a severe drive-through penalty early in the race, Nicolas Lapierre, André Negrão and Pierre Thiriet put in a fantastic comeback drive to get their campaign off to a strong start with a large points haul.
The team will now start its preparation for the 24-Hours of Le Mans with the June 3rd Test Day in sight.

Contested in ideal Spring-like weather, the three free-practice sessions allowed Signatech Alpine Matmut to fine-tune the set-ups on the Alpine A470 and to correct over-steering issues they encountered early in the weekend.

Everything fell into place during a qualifying session marked by two long interruptions that slowed the No. 36 in its tracks. Associated with Pierre Thiriet, Nicloas Lapierre kept his cool to set the benchmark time in LMP2 and gave the team the first pole of the season by 0.024s.

On Saturday, the temperature was even warmer for the start of the Total 6 Hours of Spa-Francorchamps at 13:30 in front of the packed grandstands.

Forced wide at turn one, Nicolas Lapierre had to straddle the kerb and dropped to seventh place. The early woes continued when the Frenchman received a drive-through penalty when the race direction felt that the return to the track had been done outside the regulations.

Nicolas Lapierre served his penalty before Pierre Thiriet took over in the first round of pit stops. The Silver driver showed speed and consistency on his double-stint as he made the most of the safety car period to make up ground and move up to fourth place.

Just after half-distance, André Negrão headed on to the track in third position before overtaking Weiron Tan during his triple-stint. Nicolas Lapierre then got back in the car behind the n°26 G-Drive.

As the final hour began, another safety car intervention wiped out the advantage that was patiently built by the crew. Signatech Alpine Matmut took advantage to bring Nicolas Lapierre in after his second stint.

André Negrão got back in the car to finish the race. After getting the absolute most out of his tyres to build a lead from his closest rivals, the Brazilian driver dropped behind Ho-Pin Tung on the last stint. The n°36 Alpine A470 took the chequered flag in third place.

Signatech Alpine Matmut will now turn its attention towards the 24-Hours of Le Mans, which will kick off on the June 3rd Test Day.

What they said
Philippe Sinault, Signatech Alpine Matmut Team Principal
“This new season began with a pole position and a podium. This shows that our level of performance and our drivers were on point. Unfortunately, we had a complicated start to the race when Nicolas was pushed wide and got boxed in. In the heat of the moment, he played it safe, but received a penalty for returning to the track too early over the kerb. So, we opted for an aggressive strategy hoping for a safety car. This put us into second place for a long time behind the G-Drive, which was ineligible for points. Alas, the safety car in the final hour cost us a lot in destroying our fourty-second lead. For the final run to the flag, the guys behind us were on new tyres while we had used all of ours trying to make up ground. We still have to work on the consistency and wear of the tyres, but our three drivers gel together nicely. This should be one of or strong suits this season. Now the time has come to go into ‘Le Mans’ mode. Like each year, we will put in a new engine, new gearbox and new running gear. The next few weeks will be intense as we try to anticipate all the possible scenarios for the June Classic.”

Nicolas Lapierre: “We are starting the season on a solid foundation with a good overall cohesion and pure performance that saw us get the pole yesterday. The team got everything sorted out between the free-practice sessions and a tough qualifying session with two red flags. At the start, there was some confusion among the LMP1 cars and I had to go on to the other side of the curbing. The race director felt that I didn’t return to the track in the proper manner. Yes, the penalty was harsh, but it is my responsibility. Like the entire team, I can't wait for the next challenges.”

André Negrão: “It is a good result, but we could’ve done better. Pierre and Nico did a fantastic job in getting the pole. It is a shame though that the hectic start penalised us just until the end of the race. We made up all the lost time, but the end of the race was tough with very used tyres. We need to continue to work in this area for the 24-Hours, but we will be back even stronger for Le Mans.”

Pierre Thiriet: “Although it is always disappointing not to win, we will get there in the long run and this is an excellent result. There are a lot of positive points in the way we carried on after some complicated free-practice sessions. Today, I had a lot of fun in the close fights while trying to stay in touch with the leaders in traffic. Our slightly offset strategy didn’t really work out. We need to work more on our race pace, but I have every confidence in the team."