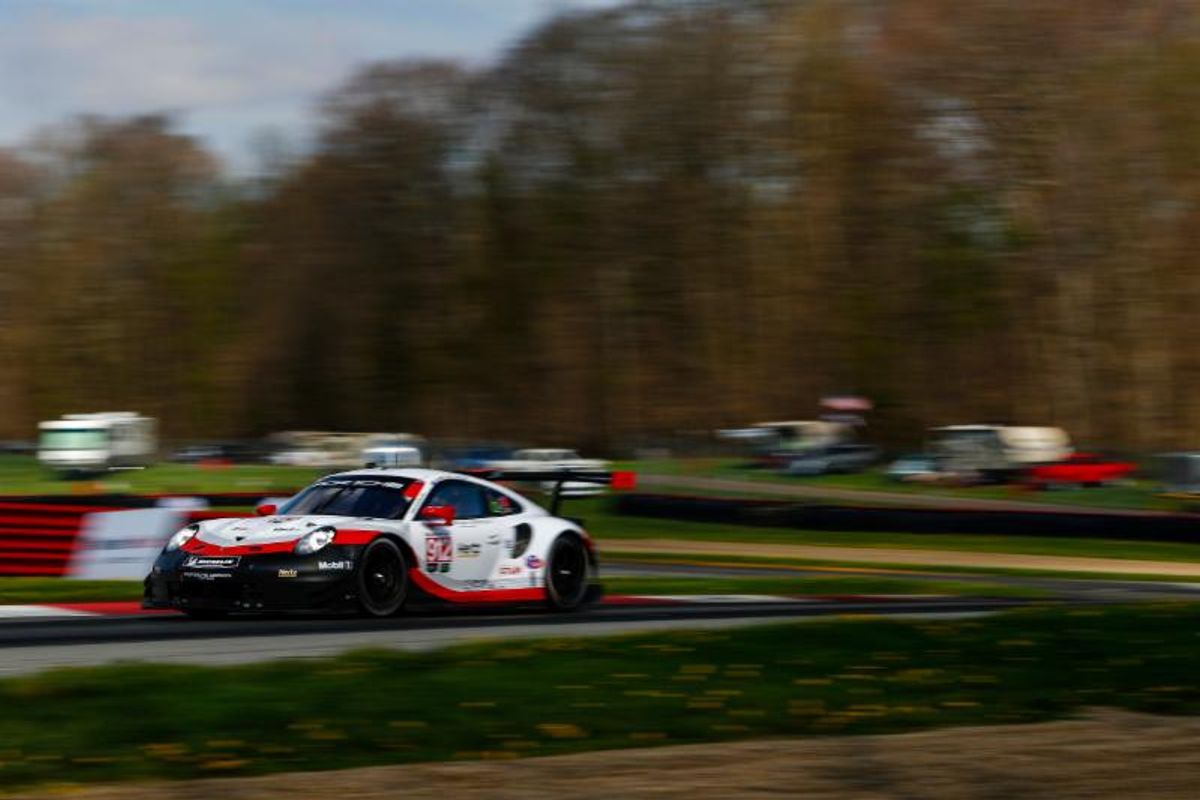 Sunday was Porsche’s day at the Mid-Ohio Sports Car Course.

After the No. 911 Porsche 911 RSR of Nick Tandy went from second to the lead on the race’s opening lap – and subsequently led the race’s first 55 minutes – it was the driver of the No. 912 Porsche entry, Earl Bamber, who later assumed the lead with 90 minutes remaining in the two-hour, 40-minute race. With co-driver Laurens Vanthoor, Bamber never looked back, only losing the lead on a series of green flag pit stops to win the Acura Sports Car Challenge by 1.673 seconds.

“We had really smart strategy that gave us the lead at the pit stop,” said Vanthoor, who picked up his first career IMSA win. “It gave us a good gap, but I had to try and control it a bit with the tires. I knew the guys behind me wanted to catch me, but I didn’t want to destroy my tires too much, which isn’t easy. It was a very stressful one and a half hours. I was happy when it was done and finally we won.

“I had to wait one-and-a-half years to get my first win. We’ve had some opportunities as well, but it always went wrong for some reason. Finally, it worked out and it’s a huge relief.”

It was Porsche’s second win in four IMSA WeatherTech SportsCar Championship GTLM class starts this season, with the No. 911 of full-time drivers Tandy and Patrick Pilet joining Frédéric Makowiecki in a victory in the Mobil 1 Twelve Hours of Sebring Presented by Advance Auto Parts in March.

While Porsche won the race, the No. 25 BMW M8 GTE of Connor De Phillippi certainly made it interesting.

De Phillippi’s team utilized a different pit strategy that saw him lead late, before giving way to Vanthoor for good with 33 minutes remaining. He made a late charge in the closing laps, but ultimately finished second alongside co-driver Alexander Sims, matching the duo’s best finish of the season.

As is typical in the ultra-competitive GTLM class, four different manufacturers made up the top four positions with the No. 3 Corvette Racing Chevrolet Corvette C7.R of Antonio Garcia and Jan Magnussen rounding out the podium, and the No. 66 Ford Chip Ganassi Racing Ford GT of Joey Hand and Dirk Mueller finishing fourth.

All eight cars in the class finished on the lead lap.

“This was a two-hour, 40-minute race and I think the top six or seven cars were covered by 28 seconds by the end of the race,” said Bamber. “I think that shows how great the BoP is and how great IMSA is doing. You can’t make a little mistake or you’re at the back. But that’s why we’re here, to race the best and make it a tight fight and we love it.”

Lexus put forth the dominating performance it had been dreaming of since entering the IMSA WeatherTech SportsCar Championship GT Daytona (GTD) class in 2017 Sunday at the Mid-Ohio Sports Car Course.

It was just a matter of which of the two Lexus RC F GT3s was going to pull off the feat.

Saturday afternoon, Jack Hawksworth in the No. 15 3GT Racing Lexus RC F GT3 scored the manufacturer’s second WeatherTech Championship Motul Pole Award. While the drivers of the team’s other entry – Kyle Marcelli and Daniel Baumann in the No. 14 Lexus completed the 1-2 sweep of qualifying.

At the end of Sunday’s race, it was Marcelli and Baumann on the top of the podium after dominating the second half of the two-hour, 40-minute Acura Sports Car Challenge to deliver the historic first North American victory for the Lexus RC F GT3.

“This is a huge win,” said Marcelli, who also won overall in yesterday’s IMSA Continental Tire SportsCar Challenge Mid-Ohio 120. “It’s always difficult to get the first one. There is always a lot of pressure. I think I put a lot of pressure on myself. This is the first sprint race of the season and I knew we had a strong car and a strong driver line-up and we needed to execute. I knew if we didn’t make a mistake then we should get a good result.

“It’s a team effort, the 3GT guys have worked so hard for two years. It’s the second year of the program, so it’s an honor to bring them the first win for 3GT and Lexus. (Going to Detroit), I guess you could say it’s a home race for the team, so again we’re probably going to put a lot of extra pressure on ourselves to go ahead and execute.”

Between the two Lexus racecars, 3GT Racing led every lap of Sunday afternoon’s race. Hawksworth and co-driver David Heinemeier Hansson led the first 43 laps and ultimately finished fourth, which also bested Lexus’ prior best finish of fifth up until Mid-Ohio.

However, the win wasn’t without it’s drama.

Alvaro Parente in the No. 86 Meyer Shank Racing Acura NSX GT3 looked to deliver heartbreak for Lexus and a victory for the race’s entitlement manufacturer, at one point pulling within inches of Baumann on the final lap of the race. Baumann was able to hold off the charge, leaving Parente and co-driver Katherine Legge with a runner-up GTD finish for Acura.

“I felt the pressure coming with 15 minutes to the end,” said Baumann “We struggled a little a bit with the used tires in the second half of the stint. I think one more lap and he would have passed me for sure. I was happy when I saw the white flag – one more lap – he closed in so quick and I just tried to defend with everything I’ve got. (The first win), it’s a great feeling.”

Rounding out the podium were Mobil 1 Twelve Hours of Sebring Presented by Advance Auto Parts winners Bryan Sellers and Madison Snow in the No. 48 Lamborghini Huracán GT3, who increased their lead in the championship to eight points following their third consecutive podium.