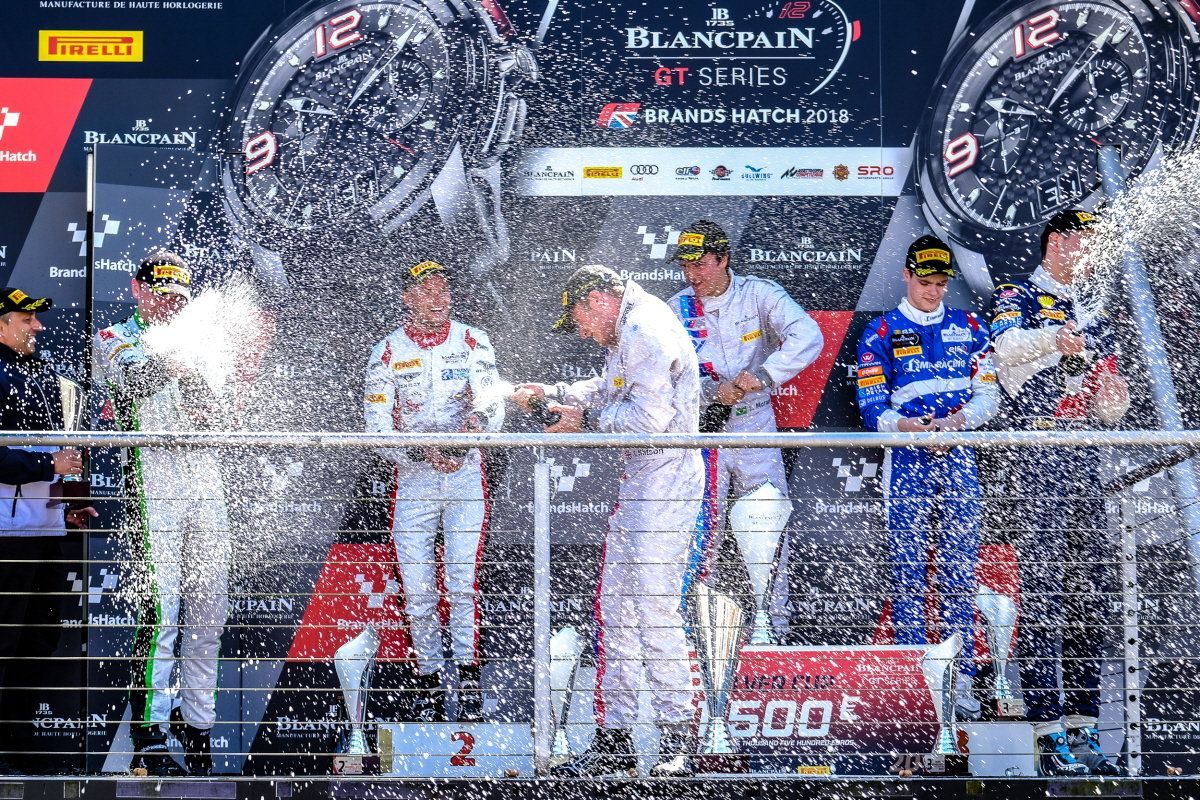 Josh Caygill and team-mate Aron Taylor-Smith celebrated their maiden Blancpain Sprint Cup victory on ‘home’ ground at Brands Hatch Grand Prix Circuit in Kent on Sunday, 6th May, with a very popular Silver Cup success during race one of the weekend.

During the first one-hour encounter of the pan-European championship’s sole visit to the UK, Holmfirth-based Caygill and Irishman Taylor-Smith held third in the Silver Cup until late in the race when class leader Jack Manchester crashed out.

Moving up into second as a result, the Bentley Continental duo went on to take the chequered flag a mere 0.8 seconds shy of the win. Post-race, however, the BMW M6 GT3 originally credited with first place was disqualified having ignored black and orange ‘mechanical warning’ flags – elevating Caygill and Taylor-Smith into the winners' position.

Race two was, unfortunately, one to forget when Taylor-Smith was caught-up in the aftermath of a multi-car tangle at the exit of Druids Hairpin on lap one. Despite the enforced retirement for the No.31 car, though, the Team Parker Racing duo still completed their most competitive outing yet in the Sprint Cup.

“It’s obviously absolutely mega to take our first Silver Cup win, especially at our home race”, said SMUK and LSS Waste-backed Caygill, “The car felt good this weekend, the Team Parker boys did a mega job and I was happy with my performance. I kept chipping away during practice, finding chunks of time, and in qualifying found a second so I was pleased with that.

“In the first race I had a really good start with a mega first lap, I put a massive gap between me and the cars behind and I was tagged right on the back of the bunch ahead. Then we had the Safety Car and after that I concentrated on putting a big gap to the Ferrari behind. Our pit-stop was fantastic and then Aron did a mega job in his stint, it’s fantastic to have the first win.”

Under glorious Spring skies at Brands Hatch, qualifying on Saturday afternoon began with Caygill behind the wheel of the Bentley for session one, to determine the race one grid starting order, and Taylor-Smith taking over driving duties for the race two session.

Caygill posted the 16th fastest time, third in the Silver Cup class, but actually went on to begin the first of Sunday’s two encounters from an elevated 15th on the grid overall due to a penalty for a rival entry. At the start, again in beautiful weather, the Yorkshireman held station initially and then moved into 14th place mid-lap before the Safety Car was deployed in time for lap two.

Action resumed on lap four, with eight minutes gone, and Caygill chased the Lamborghini of Loris Hezemans. Just 0.2 seconds behind his rival into lap five, he then fell into the clutches of two other Lamborghinis behind and after being passed by the Perez Companc car his exit from Surtees was compromised and Caygill was edged further back to 16th overall at Hawthorn by Christian Engelhart.

Remaining in 16th position, third in class, up to the opening of the pit-stop window at the 25-minute mark, Caygill then pitted at the first opportunity to hand the car over to Taylor-Smith. When the race order settled after all pit stops were complete, Taylor-Smith held 17th position and third in Silver with three seconds to try and make up to the second-in-class BMW of Lukas Moraes.

Initially the Irishman traded similar lap times with Moraes and so the gap remained at roughly three seconds. Getting the gap down to almost two seconds with 20 minutes of racing to go, Taylor-Smith closed to within 1.6 seconds into the final 10 minutes and into the last five minutes less than a second separated the two cars.

Glued to the back of Moraes, a dramatic and unexpected turn of events with just a couple of minutes to go then elevated Taylor-Smith into second in Silver when class leader Jack Manchester spun out into the gravel and retirement. Taking the chequered flag in 16th overall, Taylor-Smith was just 0.8 seconds shy of the Silver class win before being promoted into first place post-race.

Taking the opening stint of race two, which began in air temperatures of 26 degrees, Taylor-Smith lined-up 18th overall on the grid, second in the Silver class, but after a clean start chaos ensued out of Druids. Just ahead, the sister Team Parker Bentley of Callum Macleod was pitched into a spin and Taylor-Smith had nowhere to go – resulting in contact with the barriers and heavy damage.

“Race two was a bit of a sickener for us, well the team as a whole, but it was just one of those things where nobody could do anything”, reflected Caygill, “I think we could easily have taken away another podium but we have to be happy with what we achieved this weekend regardless.”

Misano in Italy will host the third event of the Blancpain Sprint Cup season over the weekend 23rd/24th June.