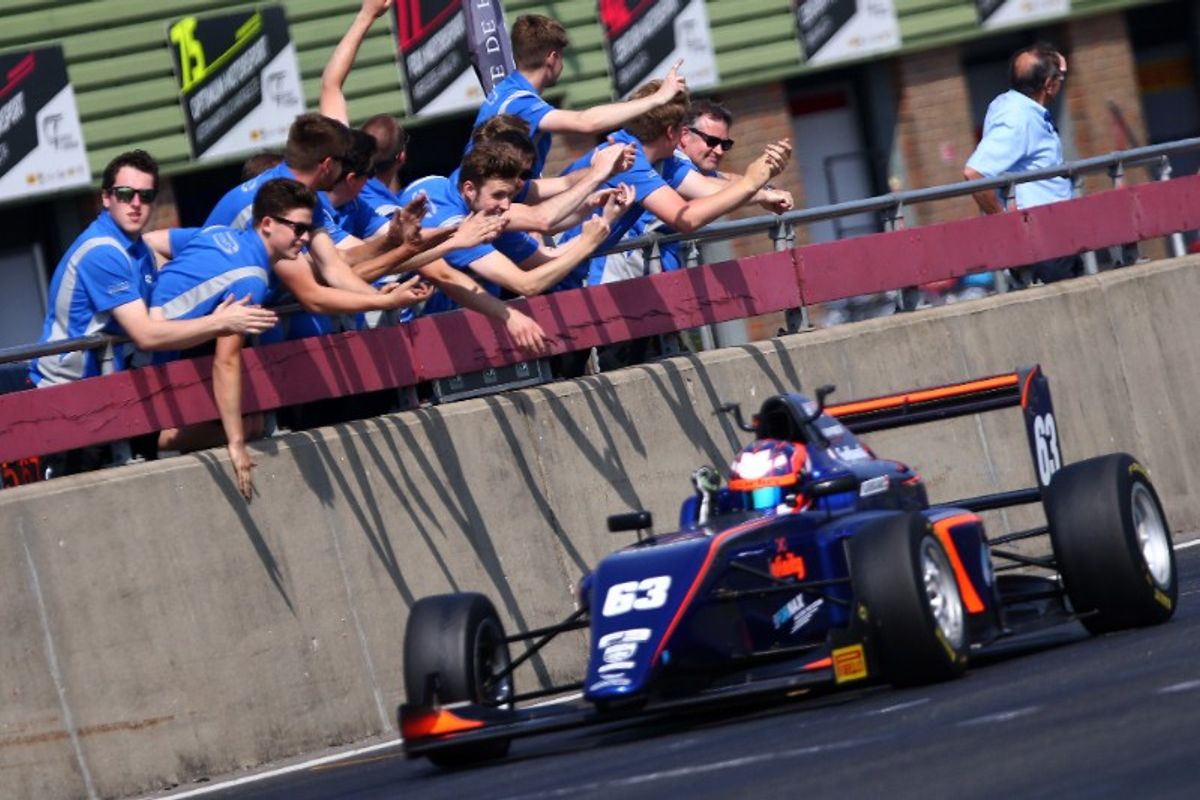 Carlin's Nicolai Kjaergaard claimed his second BRDC British F3 victory of the season in the opening race of the weekend at Snetterton, putting him level on points with Linus Lundqvist who finished third.

The Danish driver now holds the championship lead on count-back, with both drivers having won two races, but Kjaergaard has more second places (three versus Lundqvist's one).

Kjaergaard's win came from pole position, secured in qualifying this morning. He made a great start to hold the lead, and kept it throughout, keeping Lundqvist around a second behind him for the duration until a late mishap for the Swede allowed Kush Maini to take second, with Lundqvist still taking his fourth podium in a row with third.

Qualifying
Kjaergaard claimed pole position in qualifying for race one, pipping title rival Lundqvist by 0.243s. The Dane's time came midway through the session, and was enough to secure his second pole of the season.

Lanan Racing's Maini was fastest in the early stages of the session and eventually claimed third on the grid, just 0.011s behind Lundqvist, with Sasakorn Chaimongkol putting in his best qualifying performance of the year for Hillspeed with the fourth fastest time, just over half a second away from Kjaergaard.

The next runners were separated by the tiniest of margins. Billy Monger climbed through the order during qualifying and secured eighth, 0.031s behind Charpentier and 0.067s ahead of Fortec's Tom Gamble, while Hillspeed's Jusuf Owega completed the top-10, who were all covered by just over a second.

Manuel Maldonado was just 0.009s away from Owega's time, and in turn was 0.005s in front of Sun Yue Yang, who was 0.027s ahead of Pavan Ravishankar. The Singaporean's team mate Krishnaraaj Mahadik was 0.028s behind, while Jamie Chadwick was just 0.002s behind the Indian. Arvin Esmaeili and Ben Hurst completed the 17 runners for this weekend.

Race one
Kjaergaard claimed his second victory of the year with a commanding performance in the opening race of the weekend.

The Dane made a great start and kept Lundqvist at around a second behind him throughout, until Lundqvist's late drama promoted Maini to second, with Lundqvist taking third. The result means Kjaergaard and Lundqvist are tied at the top of the championship standings, with Kjaergaard the new championship leader by virtue of more second place finishes.

Cane was fourth for Douglas Motorsport, fending off a race long challenge from an impressive Webb, who converted his fifth place on the grid to the same position in his first British F3 race. Charpentier was sixth for Fortec, holding off Carlin's Monger, with Gamble, Sun Yue Yang and Krishnaraaj Mahadik completing the top-10.

Kjaergaard powered away from pole position, leading to Riches from Lundqvist and Maini, while fourth-placed starter Chaimongkol was slow away and plummeted down the order to 14th. Kjaergaard led by just over a second at the end of lap one, a margin he was to hold throughout the early stages, with the front two evenly matched, as demonstrated by the pair setting lap times within 0.003s of each other on lap three.

The Dane extended the lead marginally to 1.2 seconds on lap four, but by lap eight, Lundqvist had begun to eat into the lead slightly, with the gap just below a second before Lundqvist made a small mistake at Hamilton on the penultimate lap, handing second place to Maini, and in doing so, forfeiting the championship lead.

Maini's second place, was his fourth podium of the year and elevated him to third in the championship standings, while Lundqvist was disappointed on the podium afterwards, but also conscious that his fourth consecutive podium result is still good for his championship aspirations.

Douglas Motorsport's Cane in fourth gained two places on his starting position, but was challenged throughout by Chris Ditttmann Racing's Webb, who despite a lack of testing showed he has good inherent pace, and finished 0.347s behind his fellow Brit on his F3 debut.

Fortec's Tristan Charpentier in sixth was 0.7s ahead of Carlin's Monger, who was close by throughout and ultimately finished 0.7s behind the Frenchman, and 0.391s ahead of Charpentier's team mate, Tom Gamble.

Sun Yue Yang gained three places on his starting position to finish ninth, and almost five seconds clear of Mahadik, who was just half a second clear of the recovering Chaimongkol. The Thai driver showed his pace by picking off a number of competitors as he recovered from his slow start.

Manuel Maldonado, who finished last after a late off, will start race two tomorrow morning from pole position, while Lundqvist claimed fastest lap, potentially giving him pole for race three should no one better his time in the second contest.

New championship leader Kjaergaard commented: "Linus was very close and I saw in the assembly area before the start of the race that he had new tyres on so I knew he would be fast in the first few laps. I managed to keep a gap though and in the end I had good pace and I think the new tyres went off a bit for him, which was good for me.

"Towards the end he was getting a little bit closer and I could see him in my mirrors, but then he ran wide at turn five and he lost out and made it a lot easier for me in the last two laps.

"I start at the back tomorrow and I think it will be a very exciting race. We have good pace and hopefully we can come up through the field and set a good lap time to get as good a start position as possible for race three."