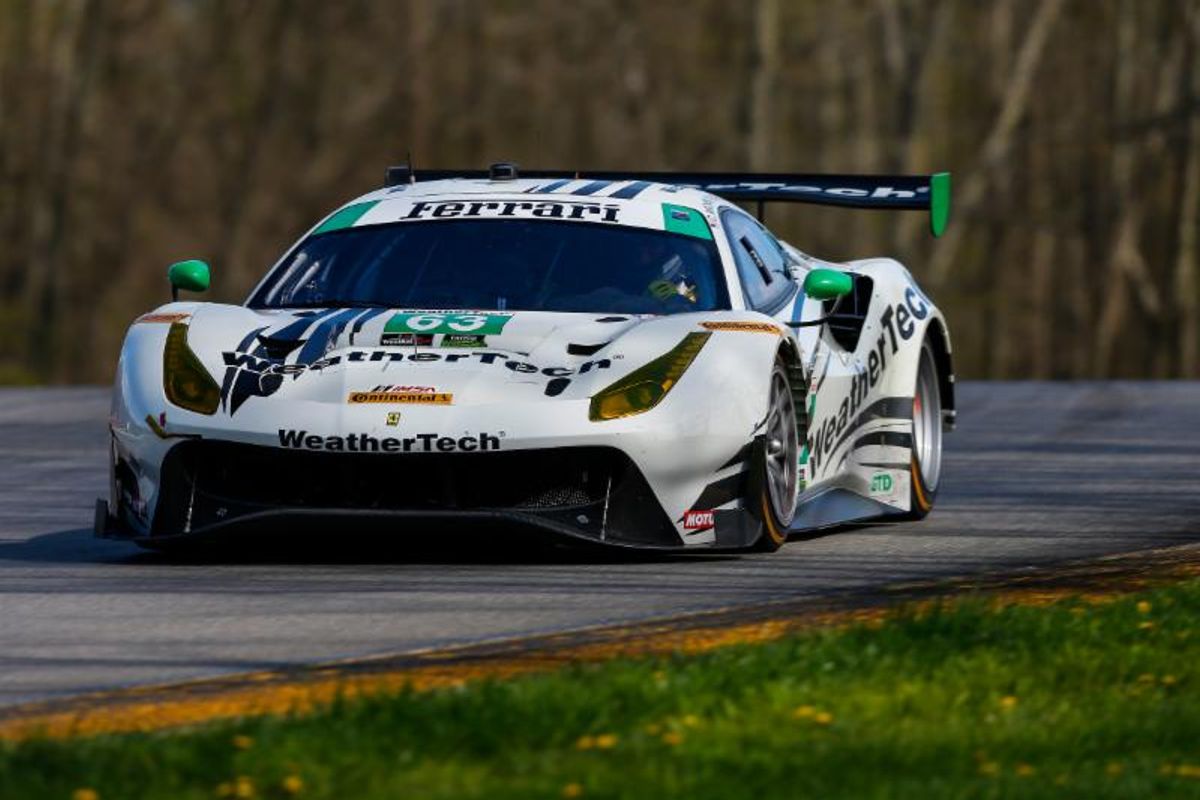 Scuderia Corsa will have a familiar face stepping in for one of its No. 63 WeathertTech Ferrari 488 GT3 drivers this weekend in the IMSA WeatherTech SportsCar Championship Chevrolet Detroit Grand Prix presented by Lear.

Cooper MacNeil will be joined in the No. 63 Ferrari by Jeff Segal for this weekend’s race as the team’s regular, full-season driver Alessandro Balzan recovers from a minor medical procedure and is taking the weekend off.

MacNeil - who is fourth in IMSA WeatherTech Sports Car Championship GT Daytona (GTD) points with Balzan - and Segal want to have a strong showing before taking the traditional June break to head off to the 24 Hours of Le Mans.

"It is tough that Ale won't drive this weekend but I know that Jeff will do a great job," MacNeil said. "Jeff has been with us for every race this year and has a great feel for the team, the data, and the car. It will be a good warm-up for him as we also have the official Le Mans practice day on Sunday."

"I am looking forward to rejoining the team at Detroit this weekend," Segal said. "The last time I was in the WeatherTech Ferrari was at Daytona. That race didn't end the way we had hoped, even though it was a strong run. I have been with the team since Daytona helping with data and coaching.

"I have been on the podium in Detroit (2013) within sniffing distance of a win. I like the track, I've done well there in the past. It will be a quick weekend as Cooper and I will run onto a plane immediately after the race to jump into a similar WeatherTech Ferrari for Le Mans practice day on Sunday."

Acura Team Penske will field entries in the Chevrolet Sports Car Classic – promoted by the Penske Corporation and the Downtown Detroit Partnership – for the first since finishing third and fourth in the American Le Mans Series race at Belle Isle in 2008.

The team's current lineup of drivers has enjoyed a great deal of success at this track. Dane Cameron, driver of the No. 6 Acura ARX-05 DPi won here in 2015 while Juan Pablo Montoya registered three pole positions during his IndyCar career.

The legend of “Spiderman” was born at Belle Isle in 2000 as Helio Castroneves climbed the fence after his first IndyCar win. Finally, Ricky Taylor has three IMSA wins on the street course.

Taylor became the 50th Team Penske driver to win a race for team owner Roger Penske following his win with Castroneves at Mid-Ohio in early May.

The newest edition of the Autoweek Podcast, which will be released on Friday, June 1, has a distinctive IMSA flavor to it.

IMSA President Scott Atherton joined hosts Rory Carroll and Mike Pryson for an inside look at the series while Spirit of Daytona drivers Tristian Vautier and Matt McMurry also are part of the podcast.

Earlier this year, the popular podcast featured IMSA drivers Christian Nielsen and Jordan Taylor, among others.

Christina Nielsen, co-driver of the No. 58 Wright Motorsports Porsche, will be seeing some familiar faces Friday at the Chevrolet Detroit Grand Prix.

In late February, Nielsen made a visit to the Motor City and spent time with a large group of students from the Detroit International Academy of Young Women. The girls, from grades 6-12, are science class students, robotics team members and members of the Girls in Technology at the school.

At that assembly, Nielsen announced the group would be attending the Grand Prix on June 1 for a behind-the-scenes tour to meet her, see her race car and get an insider’s look at what it is like to be an IMSA driver. The girls will be guests of Comerica Bank, who host the Free Prix Day on Friday at the Belle Isle street course.

“This weekend, girls from the Detroit International Academy of Young Women are coming out to the race track to visit us,” she said. “When I met with them a few months ago at a Comerica Bank event, we spoke about the STEM program and job opportunities within racing. I shared with them that, even though it feels like racing is dominated by men, it’s also possible for women to work and succeed in racing. I want them to come to the race paddock to see this firsthand and to experience our race.”

This year’s Chevrolet Sports Car Classic at Belle Isle is special for the 3GT Racing team. One race after the team scored its first WeatherTech Championship win at Mid-Ohio – also the first North American victory for the Lexus RC F GT3 – the East Lansing, Michigan-based team now heads to what it considers its home race in Detroit.

And with the confidence coming off the team’s first WeatherTech Championship win, the focus now shifts to what would be a special repeat victory.

“We’ve known for a while that we have the whole package to get the results we want, we just had hiccups along the way,” said Kyle Marcelli, who joined co-driver Dominik Baumann in the victory at Mid-Ohio. “At Mid-Ohio, everything clicked. Now we’re going into Detroit and we’re going to be competitive.”

Meyer Shank Racing returns to Belle Isle this weekend, the site of the first win for the Acura NSX GT3, scored at last year’s event by Katherine Legge and Andy Lally.

The MSR team has contended for GTD honors at every race this season, with the No. 86 Acura of Legge and co-driver Alvaro Parente finishing second, just 0.191 seconds behind the class winner, at Mid-Ohio; leading for extended periods at the Mobil 1 Twelve Hours of Sebring Presented by Advance Auto Parts and finishing second at the season-opening Rolex 24 At Daytona.

In the No. 93 NSX GT3, Lawson Aschenbach and Justin Marks also led several times at Sebring and contended for a podium before finishing fourth at Mid-Ohio.

As a result, Acura is second in the GTD Manufacturers’ Championship after three of 11 rounds.  Legge and Parente also are currently ranked second in the drivers’ title chase.

With Parente unable compete at Detroit due to a prior commitment, Mario Farnbacher returns to the MSR lineup as co-driver of the No. 86 Acura with defending race winner Legge, after serving as an endurance driver for the No. 93 Acura at Daytona and Sebring.

Farnbacher also is a previous GTD race winner on Belle Isle, taking the victory in 2015 alongside co-driver Ian James in the No. 23 Alex Job Racing Porsche.

Mazda Team Joest rides a wave of momentum heading into this weekend’s Chevrolet Sports Car Classic at the Detroit Grand Prix, coming off the team’s first podium of the season at Mid-Ohio Sports Car Course earlier this month.

And if the past is any indication of the future, this weekend at Belle Isle Park could prove to be the race when either of the two Mazda RT24-Ps – the No. 55 of Jonathan Bomarito and Harry Tincknell or the No. 77 of Tristan Nunez and Oliver Jarvis – finally sees the top step of the podium.

The team flourished in both street circuit races in 2017, with a Mazda finishing in the top three at both the BUBBA burger Sports Car Grand Prix at Long Beach and the Detroit Grand Prix. The No. 77 also narrowly missed the podium at this year’s race in Long Beach, finishing fourth.

“In years past, the Detroit Grand Prix has been a battle from start to finish,” said Nunez. “With the improvements and pace we have shown thus far, I have no doubt we will have a competitive car this week. Belle Isle is a tricky track because although there is very little room for error, we have to be on the edge to be quick.”

Despite the team’s momentum, there is a learning curve two of the drivers will face heading into this weekend – this is the first trip to Belle Isle for both Tincknell and Jarvis.

“It was great to get Mazda Team Joest’s first podium, but now it’s the win that we are focused on achieving,” said Jarvis. “With the Mazda RT24-P having been strong at the previous street circuit in Long Beach, I see no reason why we shouldn’t be capable of fighting at the front in Detroit.”

Saturday’s Chevrolet Sports Car Classic will be televised live on FS2 starting at 12:30 p.m. EDT with a re-air of the WeatherTech Championship race airing on Sunday, June 3 on FS1 at 8:30 a.m. EDT. Live IMSA Radio coverage off all the weekend’s action can be heard on IMSA.com, RadioLeMans.com and SiriusXM Radio. Motul Pole Award qualifying can be streamed live on IMSA.tv on Friday at 5:20 p.m. ET.