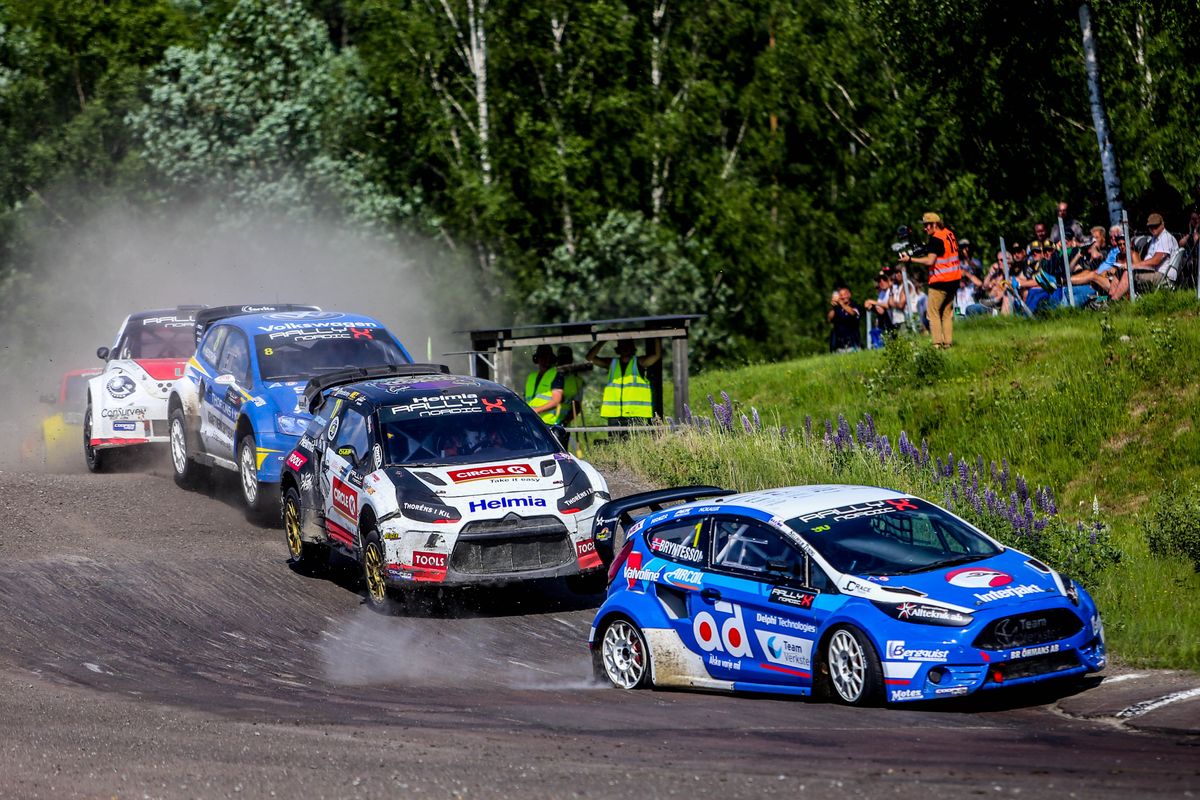 Oliver Solberg demonstrated his RallyX Nordic title credentials by defeating a high-quality Supercar field to win the second round of the season in Arvika, Sweden.

In sweltering weather conditions, the OSRX driver produced a sparkling charge in the all-important final to snatch the lead from rival Thomas Bryntesson at the start of lap two before pulling clear to win by almost four seconds.

In an eventful final race of the day, Bryntesson and Solberg – winners of their respective semi-finals – went door-to-door through the opening bends before Bryntesson nosed his Ford Fiesta in front. Solberg fought back with a better line and drive out of the final bend in his Citroen DS3 to pull alongside into turn one at the start of lap two and grab the lead from his fellow Norwegian.

The 17-year-old wouldn’t be headed thereafter, Solberg fittingly taking the chequered flag exactly twelve months after he celebrated his maiden RallyX Nordic win in Arvika. Just as he was a year ago, his two-time World RX title-winning father Petter was first to congratulate him in front of a vocal  crowd of supporters.

Walfridson’s run to second in the Helmia Motorsport Renault Clio was just reward on a challenging day that saw him playing catch up following issues in Q2. Nonetheless, the Swede, together with fellow podium winner Gehrman in the Eklund Motorsport Volkswagen Beetle kept themselves out of trouble to collect a podium apiece.

By contrast, Bryntesson’s day ended on a sour note following an otherwise exemplary run to the final. The defending champion scored a trio of wins in the qualifying races before victory again in the semi-final set him up for a potential maximum weekend points’ haul. However, after losing out to Solberg on lap two, Bryntesson suffered a right-rear puncture on lap three to slow into the clutches of the chasing pack.

Valiantly wrestling his ailing car to the chequered flag, Bryntesson held onto a fine fourth-place result, one that protects his RallyX Nordic lead overall.

His cause was assisted by Oliver Eriksson being excluded from the final after the Olsbergs MSE driver was judged to have played a decisive part in Peter Hedstrom’s retirement on lap one. Shuffled down to fourth in the melee of the first turns, Hedstrom’s contact with Eriksson saw him spin into the barriers and ultimately into retirement.

In the RallyX Nordic classification, Bryntesson retains a nine-point advantage over Solberg who ascends to second position. Despite failing to finish the final for a second successive round, Hedstrom holds onto third overall with Walfridson following closely in fourth position.

Oliver Solberg, OSRX, commented: “It’s amazing to win in Arvika again and get my title hopes back on track after all the problems we had in Holjes. It was an eventful day; We had problems with the launches initially but once we had fixed it the car was brilliant and I could focus properly on racing. In the final I had a great start and even though Bryntesson got ahead of me through the first corners I felt I was faster. When he went wide into the final corner I just stuck to the inside and was able to out-drag him. After that I just had to focus, keep my lines clean and keep pushing. It’s a great feeling to win again and gives me confidence ahead of my home round in Grenland later this month.”

Ian Davies, RallyX Nordic Series Manager, said: “Arvika is a classic RallyX Nordic venue and it has treated a large and passionate crowd to some classic rallycross racing. The sheer strength-in-depth of RallyX Nordic across all classes could be seen throughout the day with some truly spectacular action, leading to a gripping Supercar showdown. Congratulations to Oliver Solberg for saving his best until last with a tremendous drive in the final, but well done to all drivers for battling more than just each other in the testing hot weather conditions this weekend. We look forward to more brilliant competition in Grenland, Norway on 23-24 June.”

Supercar Lites & SRX
In the ultra-competitive Supercar Lites category, Olsbergs MSE’s Guillaume De Ridder scored his second win of the season with a commanding performance in the final. Resisting race-long pressure from Ben-Philip Gundersen, the Belgian led from lights-to-flag to strengthen his grip in the overall standings.

Simon Olofsson completed the podium, holding off Vasiliy Gryazin and Marcus Hoglund, while defending champion William Nilsson failed to finish after technical issues consigned him to a dramatic fiery exit.

Isac Egonsson scored victory in the SRX class, with Hans Carlzon and Nils Andersson completing the podium in an all-Swedish podium.