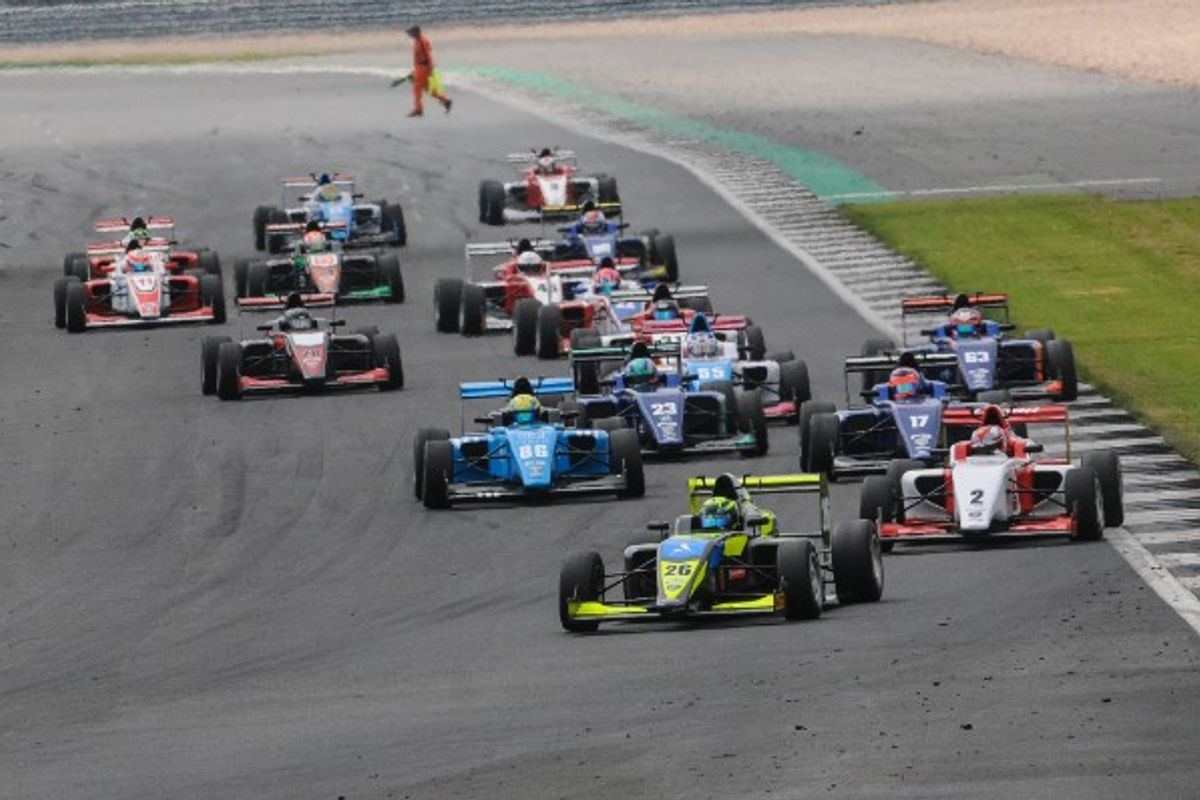 Double R Racing's Linus Lundqvist converted his first qualifying pole into victory at Silverstone today (Saturday), but the Swedish driver was made to work for it after a race-long challenge from Lanan Racing's Kush Maini. Douglas Motorsport's Jordan Cane almost made it a three-way fight for the lead after closing up on the duo in the latter stages.

Lundqvist's win, his fourth of the year, continues his trend of taking victory at every venue visited so far this year, and extends his championship lead to 48 points over Carlin's Nicolai Kjaergaard.

Qualifying
Lundqvist had been fastest in both Friday test sessions on the Silverstone Grand Prix circuit, and continued his testing form into qualifying this morning, securing pole position by just 0.051s from Maini.

Maini topped the times for much of the session before the championship leader took over at the top with less than five minutes remaining, with Maini's second his best qualifying performance of the year so far.

A late effort for Carlin's Clement Novalak put him third on the grid, with the British driver 0.171s away from Lundqvist's time, and 0.040s ahead of fellow Brit Cane.

Carlin's Billy Monger equalled his best qualifying result so far with fifth, just 0.013s behind Cane, with Jamie Chadwick 0.017s behind in sixth for Douglas Motorsport.

Championship challenger Kjaergaard was seventh, but still less than a quarter of a second off the outright pace and only 0.006s behind Chadwick. A late effort from Hillspeed's Jusuf Owega put him eighth on the grid, with Pavan Ravishankar taking his best qualifying result of the year with ninth.

Fortec's Tom Gamble completed a top-10 separated by just 0.687s on the second longest circuit of the year. Less than a second covered the top-13 drivers, with the top-16 separated by 1.339s,

Race one
Lundqvist stretched his championship lead with a lights to flag victory in the opening race at Silverstone, holding off a late charge from Maini to take his fourth win of the season.

Maini was just 0.392s behind at the chequered flag, with Cane taking third for Douglas Motorsport, having closed right up to the top-two in the closing stages.

Novalak claimed fourth for Carlin, holding off a race long threat from Douglas Motorsport's Chadwick in fifth, with Kjaergaard sixth for Carlin. Owega claimed seventh for Hillspeed after a late move on Carlin's Monger, with Double R's Krishnaraaj Mahadik and Fortec's Gamble completing the top-10.

Lundqvist and Maini both made good starts to lead into Copse on the first lap, with Cane getting off the line well to claim third from Novalak. Further back, Kjaergaard passed team mate Monger for sixth place, while Mahadik had a great opening tour to rise from 15th on the grid to claim 10th at the end of lap one.

Lundqvist's lead was almost eight tenths after the opening lap, but from then on Maini was fractions quicker, and brought the margin down to just under half a second by lap seven, with Maini setting a new BRDC British F3 lap record around the newly resurfaced Silverstone Grand Prix circuit in the process.

On lap eight, Maini was close enough to Lundqvist to attempt a move. Exiting Aintree corner, he was firmly in the slipstream down the Wellington straight, and challenged at Brooklands. He was alongside but took the outside line at Luffield, with Lundqvist holding him off across the line starting lap nine, with the pair separated by just over a tenth of a second. The pair were close again at Copse at the start of lap nine, with their scrap almost bringing Cane into the battle for the lead.

Lundqvist stretched the margin back out to almost half a second starting the last lap, and held off the Indian driver to win by just under four tenths, to increase his championship lead to 48 points. Maini's second place puts him much closer in the championship standings to Kjaergaard, while Cane climbs to seventh overall.

The top-three drivers were presented with their trophies on the podium by BRDC member and GT racer Martin Plowman.