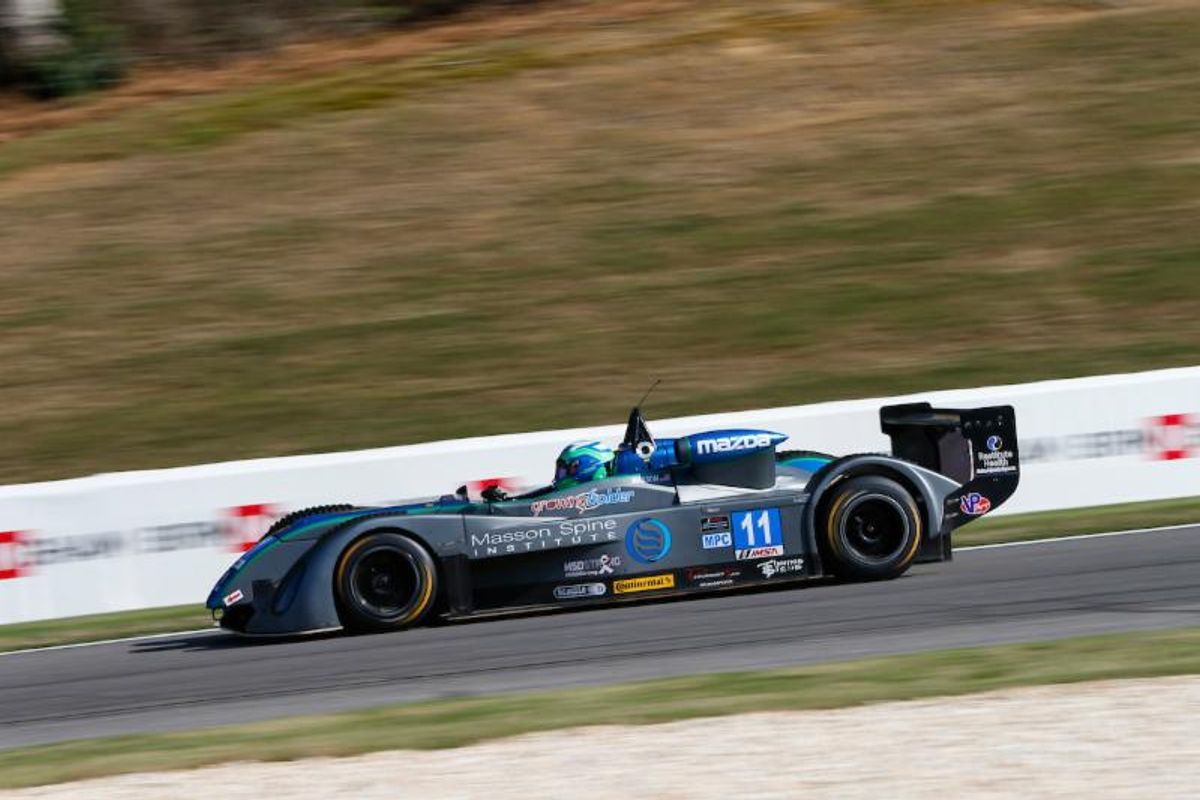 Kyle Masson knows a thing or two about what it takes to win a championship in the IMSA Prototype Challenge Presented by Mazda. Now, the 20-year-old is returning to help his father win one of his own.

Performance Tech Motorsports announced Monday that Kyle Masson, the 2017 IMSA Prototype Challenge Presented by Mazda MPC class champion and current IMSA WeatherTech SportsCar Championship driver, will team up with Dr. Robert Masson for the remainder of the season in the No. 11 Masson Spine Institute Elan DP02.

Not a bad early Father's Day gift for Dr. Masson, who leads the MPC standings by two points, 88-86, over a trio of drivers at the midway point of the season. Dr. Masson has scored two podium finishes this season, including a win in the series’ first ever race at Daytona in January.

"When I started racing, I realized a dream I had buried so deep that I didn't even remember wanting to do it when I was a 7-year-old who woke up at 5:30 a.m. to watch Speed Racer every morning," Robert said. "When Kyle said he wanted to do it, I did it at first to chaperone him and then after a while, it hit me that I had somehow found a way to resurrect that childhood dream. I loved it as much as I thought I would. It’s never too late.

“While I enjoyed racing alone in this endurance format, and have achieved success, I missed the rabbit effect of having Kyle run alongside me. I grow faster following my kid, and I want to continue to push myself as far as I can. This has been the time of my life. Kyle and I, and all my children compete at absolutely everything. It is the most natural, most normal and most happy part of our family, even when it gets tense."

Kyle cannot only provide his father insight on what it takes to win an IMSA Prototype Challenge Presented by Mazda title, but also what it takes to transition to the WeatherTech Championship.

The goal is to build an endurance racing performance and training experience for Dr. Masson to ultimately follow his son up to the Prototype class of the WeatherTech Championship.

"I am completely excited about racing alongside Kyle,” he said. “Really the most excited that I have been since winning the Daytona race in January. After that, with each race weekend, I realized that I really missed Kyle being a part of my race. I wouldn't be racing if it were not for Kyle, but he is on a great trajectory, so I need to be careful not to get in his way. Time will tell."

The Massons started competing with the goal of Kyle one day taking on the highest level of sports car racing in the WeatherTech Championship. He found immediate success, winning the Tequila Patròn North American Endurance Cup title in 2017 in addition to his IMSA Prototype Challenge Presented by Mazda championship.

Today, he drives the No. 38 Performance Tech Motorsports ORECA LMP2 with James French full time in the WeatherTech Championship.

"When my dad and I started this journey, we had no real expectations on how it was going to play out or what route of racing I would ultimately end up in,” added Kyle. “It was a journey that only time would tell if we could live up to our ambitions and desires toward me becoming a professional level racer.

"My dad has been a huge part of this journey we are on from day one. I am constantly learning from him. Learning from his vast life experiences and how they can translate to me being a better person and racer. I have inherited his ways of learning and analysis and it has helped me rise through the Mazda Road to 24 ladder to the WeatherTech series."

After two decades of learning from his dad, Kyle is now looking forward to returning the favor.

He is excited to provide at-track coaching to his dad, a different experience compared to his current instruction via their simulator. He has expressed how incredibly proud he is of his father’s performance this year and is confident he has the skills needed to become a champion.

"I don't think sharing the car will be different for us in terms of how we interact and teach each other," Kyle said. "When we were racing against each other we were still teammates, so we were always helping each other out to learn and get better.

“Now, the only difference is I am going to be racing with his championship on the line instead of mine."

One thing is for certain, when the IMSA Prototype Challenge Presented by Mazda returns at Canadian Tire Motorsport Park, it will be a special occasion for the Masson family.
﻿
The race can be streamed live on IMSA.tv on July 8 at 10:30 a.m. EDT.