Practice gets underway for American teams at Le Mans 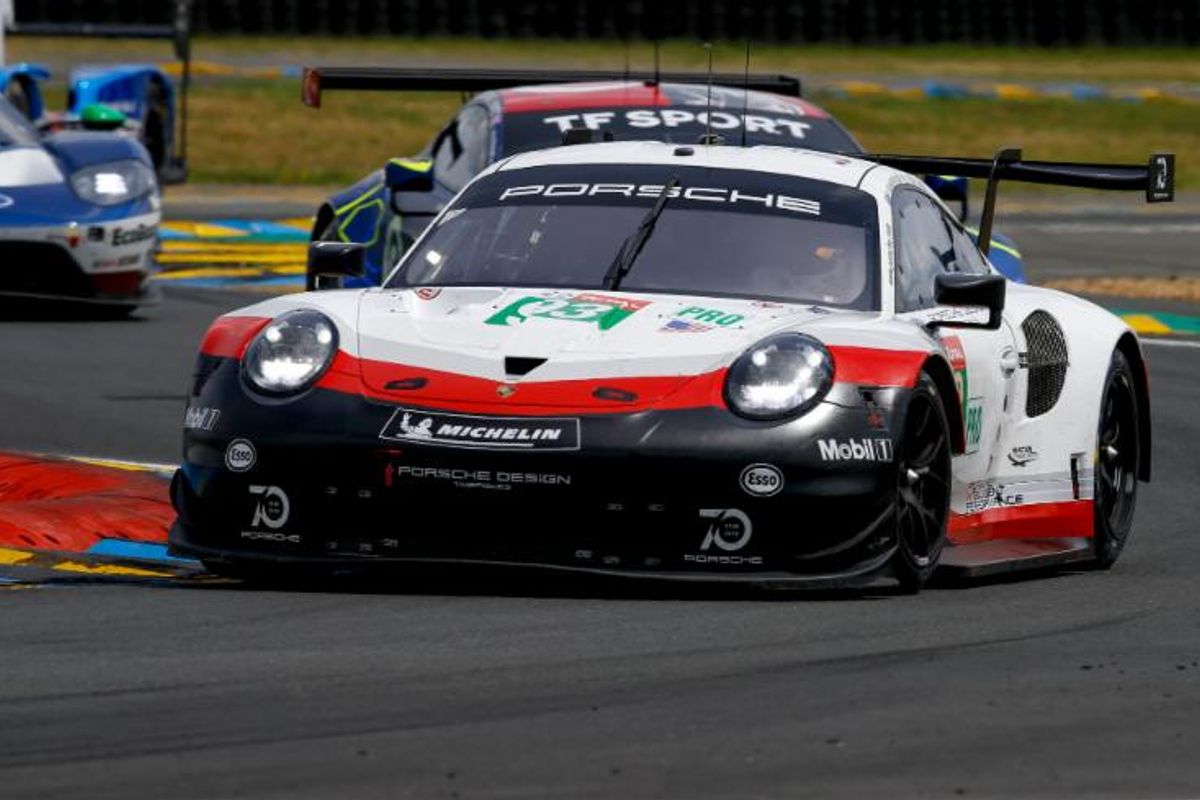 After several days of scrutineering, autograph sessions, drivers meetings and photo opportunities, on-track activities have begun in preparation for this weekend’s 24 Hours of Le Mans. IMSA is well represented with at least one driver in all four competing classes – LMP1, LMP2, GTE Pro and GTE Am – and a total of 26 drivers who have competed in every 2018 IMSA WeatherTech SportsCar Championship or IMSA Continental Tire SportsCar Challenge race.

The race starts Saturday at 3 p.m. local time (9 a.m. ET) and will be televised live in the U.S on the Velocity network. Radio Le Mans also offers complete live coverage throughout race week, including live race coverage starting at 7 a.m. ET on RadioLeMans.com.

Porsche GT Team Riding Strong Test Day Performance into Race Week
While the 24 Hours of Le Mans has been a staple of Corvette Racing and Ford Chip Ganassi Racing’s programs for the past several years, this year marks the first time that the U.S.-based Porsche GT Team that competes in the WeatherTech Championship GT Le Mans (GTLM) class is competing at Le Mans.

The team, which is operated by South Carolina-based CORE autosport – is fielding the Nos. 93 and 94 Porsche 911 RSRs in the GTE Pro class and got off to a fast start when its No. 93 entry – being co-driven by IMSA regulars Patrick Pilet, Nick Tandy and Earl Bamber – posted the quickest time in class during the official test day on Sunday, June 3.

Pilet backed it up in the opening practice session by again turning in the quickest lap, this one a 3 minute, 50.121 second tour around the nearly 8.5-mile circuit.

"The session was difficult,” Pilet said. “It was up and down. I had small contact in my first stint. I got surprised by the lower grip on the outside of the track. I was trying to avoid the curbs actually. It was OK though, the mechanics did a great job to fix it.

“At the end, we put on new tires. It was a good lap. I had no traffic and the car was running okay. We still have some ways to improve, but we’ll work on that for qualifying."

The U.S. team makes up half of Porsche’s four-car entry in GTE Pro, with the other two cars coming from the Germany-based factory team. All 12 drivers in the lineup are extremely accomplished, including the No. 93 trio which include a two-time overall Le Mans winner in Bamber; a winner at Le Mans, the Rolex 24 At Daytona, Mobil 1 Twelve Hours of Sebring and Motul Petit Le Mans in Tandy; and WeatherTech Championship GTLM champion in Pilet.

“I live in Paris, only 200 kilometers (124 miles) away, which makes Le Mans my home race,” says Pilet, who is hoping to add a Le Mans victory to his trophy case for the first time this weekend. “I am excited to compete with Nick Tandy and Earl Bamber and I’m certain that we’ve put a good package together to win this race. At the test day, we were already able to score the fastest lap time.”

Keating and Risi Ready for Action in Ferrari
Perennial WeatherTech Championship GT Daytona (GTD) frontrunner Ben Keating has driven a variety of race cars in his three previous 24 Hours of Le Mans appearances, from a Dodge Viper GTS-R in his maiden appearance in 2015, to an open-cockpit ORECA LMP2 prototype in 2016 and a Multimatic-Riley LMP2 car last year.

For his fourth attempt at Le Mans glory, Keating is back in a GTE Am entry, the No. 85 Keating Motorsports Ferrari 488 GTE that he is sharing with his full-season WeatherTech Championship co-driver, Jeroen Bleekemolen, and their Tequila Patrón North American Endurance Cup teammate, Luca Stolz.

Keating, a native Texan, enlisted the help of another successful group of sports car competitors from the Lone Star State to operate this year’s program, Houston’s Risi Competizione, which owns three class victories in the 24 Hours of Le Mans. Team owner Giuseppe Risi also owns the Ferrari of Houston dealership.

“I am so excited to team up with a fellow car dealer from Texas,” said Keating, whose Keating Auto Group operates a network of car dealerships throughout Texas. “We both got our start in the car business in Houston. We both have an enormous passion for endurance sports car racing.

“I have so much respect for Mr. Risi. I am honored that he would have me. I am very hopeful this year, because we have such great energy on the team. Everything just feels right.”

Nielsen Moves to Porsche for Third Run at Le Mans
Two-time and defending WeatherTech Championship GTD champion Christina Nielsen is back at Le Mans for the third time this year, but it will be the Danish driver’s first time racing a Porsche 911 RSR at Circuit de la Sarthe. She drove Ferraris in each of her past two appearances in 2016 and 2017.

This year, she’s sharing the No. 80 Ebimotors Porsche with co-drivers Fabio Babini and Erik Maris in the GTE Am class. Her best Le Mans result to date was a sixth-place showing in 2016.

“The 24 Hours of Le Mans is one of the highlights of my year,” she said. “It’s a race that is unique and extreme in so many ways. It’s an amazing track with a lot of great corners, and during the race you’re dealing with fast traffic.

“The difference in speeds between the GT category cars and the LMPs presents its own challenges, but coming from the IMSA series in North America, where we have multi-class racing, I’m comfortable with the pace.”

Bennett Wearing Multiple Hats at Le Mans
This is going to be a busy week at Le Mans for Jon Bennett.

As team owner of CORE autosport, Bennett will keep a watchful eye on the performance of the U.S.-based Porsche GT Team, which is operated by CORE autosport and fielding the Nos. 93 and 94 Porsches in the GTE Pro class in this weekend’s 24 Hours of Le Mans.

But before that, Bennett will be wearing a different hat – a racing helmet – as he is competing in the pair of Road to Le Mans races on Thursday and Saturday. Each race will be 55 minutes in length and features LMP3 and GT3 race cars.

Bennett is sharing the No. 15 M Sport – YMR Ligier JSP3 machine with Nic Jonsson in the LMP3 class. His full-time ride in 2018 is the No. 54 CORE autosport ORECA LMP2 car that he shares with Colin Braun in the WeatherTech Championship Prototype class.

“Splitting my focus at the race track is a position I’ve found myself in many times driving the Prototype and also cheering on our Porsche team in the IMSA series,” Bennett says. “So, I’m used to running back and forth on pit lane. I suppose on the lead up to the race day a lot of focus will be on my event and my race. As soon as the helmet comes off, I’m going to be super excited to watch our guys execute and perform a great 24 Hours of Le Mans race for Porsche.”

“The unique opportunity to put on a helmet and step inside a race car at a track as iconic as Le Mans is something very special for me,” Bennett says. “I’ve done my research and a lot of simulator time. I’m hoping the magic of technology will be such that, when I arrive, Le Mans will be oddly familiar to me in terms of many, many laps on the simulator.”