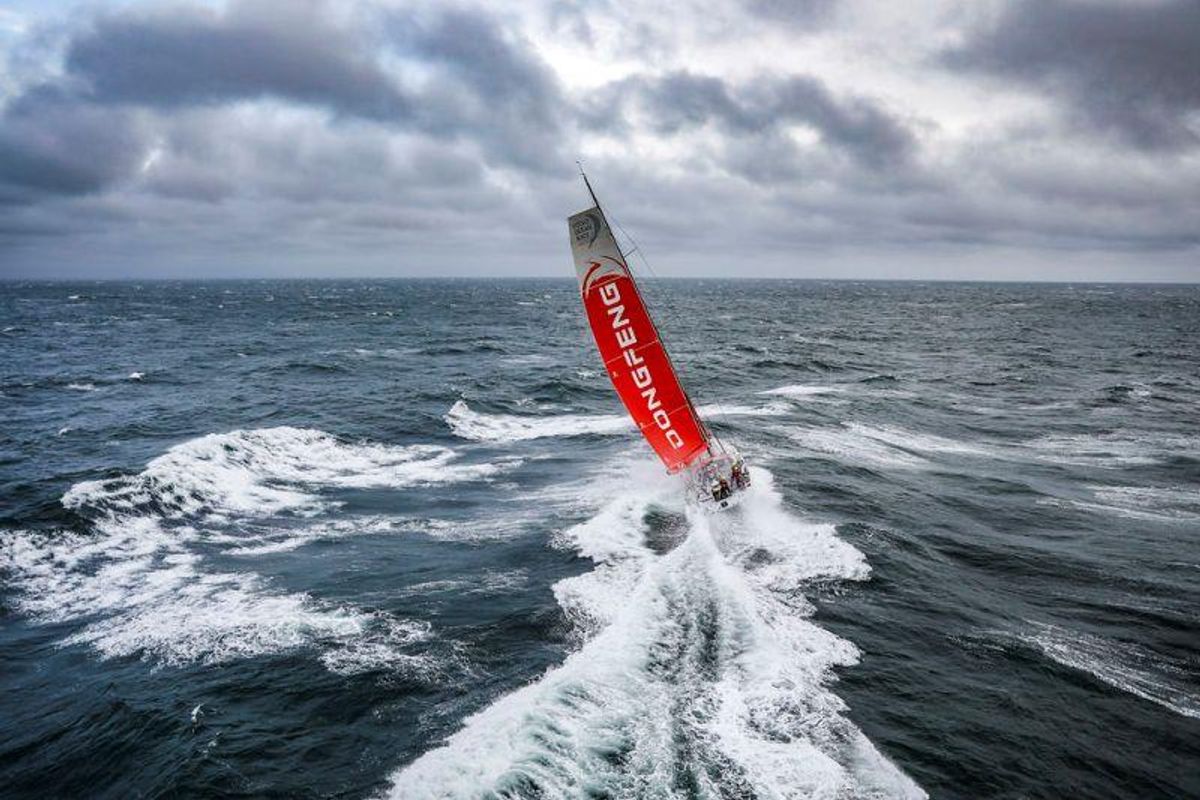 Dongfeng Race Team became the first Chinese-flagged campaign to win the Volvo Ocean Race when it took the title after winning a tense and exciting final leg from Gothenburg in Sweden to The Hague in The Netherlands.

Three teams had started the last stage of what is regarded as the world championship of fully-crewed offshore ocean racing tied on points – the other two were the Spanish entry MAPFRE and the Dutch crew on Team Brunel – but Dongfeng Race Team took the honours.

In the closing stages, skipper Charles Caudrelier and navigator Pascal Bidegorry followed the pre-race advice of the team’s shore-based meteorologist Marcel Van Triest and chose an inshore route to the finish line along the German and Dutch coasts which paid handsome dividends.

Dongfeng’s victory into The Hague was its first leg win of the 11-stage race that set sail from Alicante in Spain last October and has visited Portugal, South Africa, Australia, China, New Zealand, Brazil, the US, Great Britain, Sweden and finally Holland.

However the Chinese-flagged crew was always in the fight for stage wins and scored seven podium finishes on its way to overall victory. It was also the fastest boat of the seven-strong fleet in terms of total elapsed time around the world.

A delighted and relieved Caudrelier, aged 44, from Brittany in France said: “I cannot believe it. Even until the last 10 minutes I was saying something was going to happen. We have had so much frustration over the last nine months, never winning a leg. We were always in a good position at the start and then failing and failing and, as a skipper, it was really tough.”

Caudrelier paid tribute to his crew, made up of men and women from seven nations and including the Chinese sailors Chen Jinhao ‘Horace’ and Xue Liu ‘Black’, who he led to third place overall in the last Volvo Ocean Race in 2014-15.

“Our fantastic team is not only about the sailors - we were the strongest team because of everybody we had working behind us,” he said. “Each time we started a leg we knew the shore team had done everything for us and so I would like to offer them this victory – thank you to everybody in Dongfeng Race Team.”

Caudrelier also praised Dongfeng Motor Corporation – the Chinese truck and car manufacturer based in Wuhan - which is the sole sponsor of the campaign and which has been using the Volvo Ocean Race to help promote its brand around the globe.

“Thank you to Dongfeng Motor Corporation because they trusted me so much since the beginning and gave me the opportunity to lead this dream team and I am so proud of them,” said Caudrelier.

A spokesman for Dongfeng Motor Corporation said: “During this long and challenging Volvo Ocean Race, the full team has worked together through the physical and mental challenges presented by the most extreme sailing environment on earth.

“Dongfeng Race Team is the pride of the Dongfeng Group and it has set a great example for everyone in the company to follow, inspired by its team spirit and the way it fought for the ultimate goal. After two campaigns in this race, we have gained more than the sporting result. The race is beyond just competition - it is an ultimate test of human beings and a remarkable exploration of sailing culture.”

Bruno Dubois, Team Director of Dongfeng Race Team, paid tribute to the way his crew handled a tense and difficult final leg. “We sailed our own race and stuck to our guns in the final stages,” he said. “Charles and everyone on board can be extremely proud of their performance in this race. Although we never won a leg until today we were always there or thereabouts and we never gave up.”

Carolijn Brouwer, aged 44, of The Netherlands alongside Marie Riou of France and Justine Mettraux of Switzerland are the first women sailors to win the Volvo Ocean Race. Brouwer arrived in her home country today cheered by thousands of Dutch race fans who turned out at the Race Village and in a flotilla of boats on the water to watch the race finish.

“It’s crazy,” said Brouwer moments after Dongfeng docked. “It has been an insane race; it has been an insane leg. We always said that we were going to win a leg and there’s no better leg to win than the last one – and here we are and we have won the race.

“I can’t describe how I feel,” she added. “My goal was to win the race and to be the first woman to do it is great, but I would really like to thank the team – they were behind us all the way – the shore team and the logistics team while our sailors on the boat pulled it off together.”

British/Australian bowman Jack Bouttell who now moves onto a solo round the world campaign in the Vendee Globe was relieved that five years of work had finally born fruit.

“We pulled out the leg win at the right time,” he said. “I can’t explain how it feels – no words can explain this moment. It has been two years of blood, sweat, tears and stress and working ourselves to the limit and it all got rewarded in an instant the second we crossed the finish line – it was just incredible.”

Bidegorry joked that he had spent much of the last leg asleep, preparing for the celebrations at the finish. In fact, like all the crew on board, he barely slept at all during an intense three-day final stage.

Chinese sailor Chen Jinhao, also known as Horace, said he cried with relief and happiness when Dongfeng crossed the finish line. “I think there is no better feeling,” he said amid the celebrations on the dockside.

“We have worked for so long on this. Thank you to Dongfeng for giving us the biggest trust and biggest support so that after the last Volvo we could renew the dream of what we didn’t finish last time. That is why me and Charles and the other team worked so hard for this. Today we deserve it, it is the best moment and I am looking forward to the next challenge in the future to keep this going,” Horace added.

And he made this prediction: “In the future there will be more Chinese sailors winning and getting results like this.”

Stu Bannatyne (NZL): “It’s absolutely unbelievable. One of my favourite sayings is that it is never over until it is over and that definitely proved to be the case in this leg and the race overall. It really goes back to the start of the campaign with Bruno Dubois and Dongfeng putting together the building blocks to make this possible. It worked out nicely, we got lucky at the end and finally got a leg win.”

Daryl Wislang (NZL): “It feels absolutely amazing. We managed to pull it off at the end and get the leg win and the overall victory. The feeling hasn’t fully sunk in yet but it is amazing. In the last race, when I won with Abu Dhabi Ocean Racing, we won with a leg to spare whereas this time it really came down to the wire. To be tied at the start of the last leg is unbelievable and a full testament to the other teams.”

Kevin Escoffier (FRA): “I am very happy and very happy to win this last leg. It is not just about winning the Volvo Ocean Race but the way you win it. We have been very steady for the whole race. But we have been pushing for the last few days – and that was missing to us before - and I was quite sure when we left Gothenburg that we would win this leg, that we would win the Volvo Ocean Race and I am very, very happy we did it.”