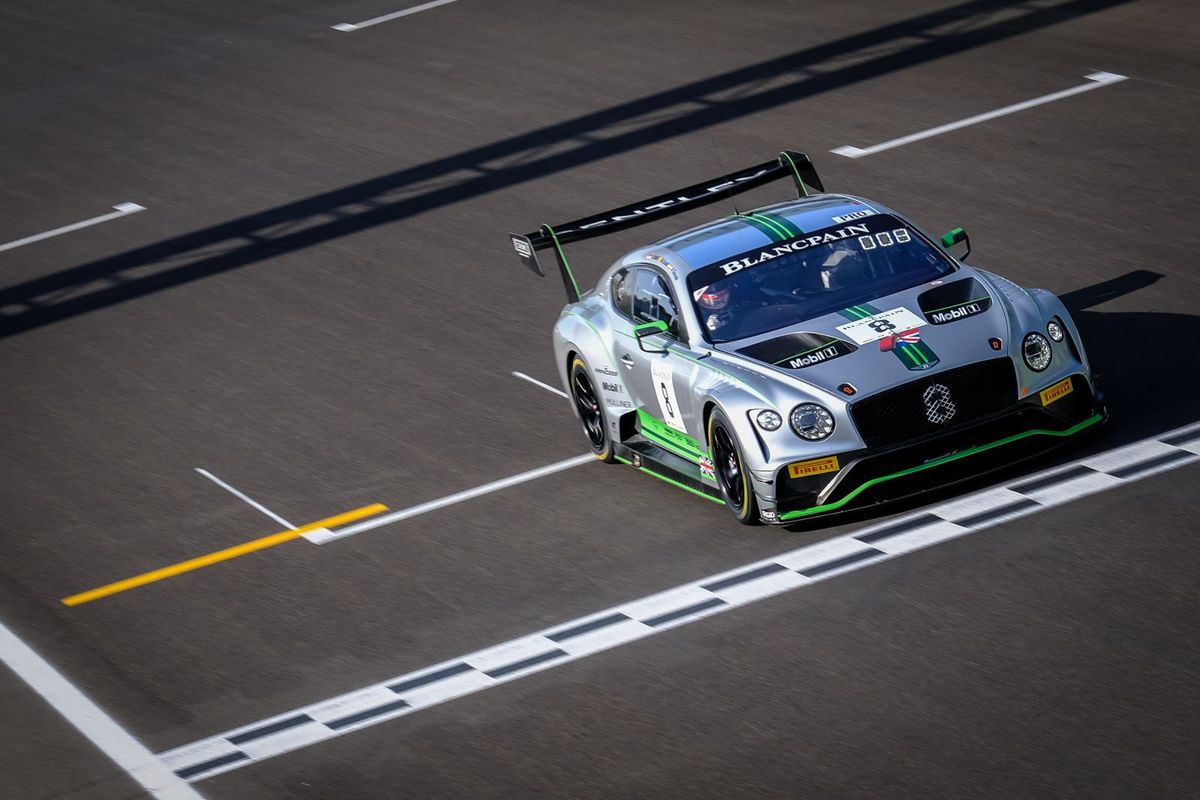 Three teams are fielding new-spec cars in the full 2018 Blancpain GT Series Endurance Cup. Ahead of this year’s Total 24 Hours of Spa, we spoke to the team bosses who will oversee their efforts at the blue riband race.
First up, Bentley Team M-Sport race manager Matthew Wilson.

In recent years, the Bentley Team M-Sport squad have shown significant progress at the Total 24 Hours of Spa.
In 2017 they achieved their best result yet at the Belgian endurance classic, with the #8 Continental GT3 of Maxime Soulet, Vincent Abril and Andy Soucek coming home just 11 seconds shy of the victorious Audi.

Naturally, there was a strong sense of pride and satisfaction at what they had achieved in the Ardennes. But, as Bentley Team M-Sport race manager Matthew Wilson explains, it also strengthened their resolve to stand on the top step of the podium sooner rather than later.

“The closer you get to winning it, the more it occupies your mind,” says Wilson, whose team will be hoping to go one better at next month’s 70th running of the iconic event. “For us to be 11 seconds away from winning last year… it’s so close, but it may as well be a million miles off.”

Though the on-track action takes place over 24 hours on 28-29 July, Spa is a year-round project for every team involved. As Wilson explains, it almost never leaves his thoughts.

“From the minute it stops, we start thinking about the next one,” he says. “We have got a list of what went well, what didn’t go well, and what we would like to do differently. You’re thinking about it straight away.
“Then you start the Blancpain GT Series season, and when something happens at Monza or Silverstone you think: ‘We need to sort that out before Spa’. So it’s always on your mind.”

Three Blancpain GT Series Endurance Cup events precede the Total 24 Hours of Spa, including the recent Circuit Paul Ricard 1000km. This long-distance contest is particularly important to teams and drivers when it comes to preparing for their season-defining race.

“We try to have the mechanics and engineers who are doing Spa at Paul Ricard,” explains Wilson. “It’s really good preparation, with the race going from daylight to darkness.
“You have also got the joker pitstop, so everybody gets to try that out at Paul Ricard before going to Spa. We definitely try to use the race to put us in the best shape possible.”

Each team was able to use a joker pitstop once during the six-hour event at Circuit Paul Ricard, while there will be four available during the Total 24 Hours of Spa. This, says Wilson, could prove decisive, and his team is hard at work to ensure they make the most of it.
“In the three-hour races, the mechanics have plenty of time to change tyres, but with the joker they’ll need to be really fast. So their training ramps up heading towards Spa and we’ll be a bit more intense on that this year, as we’re not doing the Sprint Cup.”

Their work is clearly paying off. At the recent Circuit Paul Ricard 1000km, the British outfit used their joker pitstop perfectly to vault the #7 Continental GT3 up the order, after which it fought for overall victory.
The team was denied on the very last lap of the race, but their rate of development has been impressive since debuting a new-spec car earlier this year. While aware that running new machinery at the Total 24 Hours of Spa will not be straightforward, Wilson believes his team is well prepared for the task.

“It will present massive challenges,” he says. “We’ve done a huge amount of testing and I think we’re in a place with the car where – touch wood – we are generally very happy with our performance.
“We know we’ve got a few things that we want to improve reliability-wise before Spa, but the trouble is that racing is so different from a test. You can do as much testing as you like, but until you put the car on the track with 50 others, you don’t have as good an idea. There are all these little things that you don’t experience until you get to a 24-hour race. That is why they are so unique.”

With Spa now their main focus, the team is preparing for the official test day at the Ardennes circuit on 3 July.
"The main thing is that the cars go through a big strip-down and are rebuilt before Spa. We tend to take the car back to a bare shell, inspect everything and rebuild it,” Wilson explains. “We try to do that before the test, because then you know that you’re in a good position for the race.

“The main preparation takes place during the week of Spa,” he continues. “While you want to be as prepared as you can, we always try to get the guys away [from the circuit] as early as possible. If we can finish at half-five, rather than hanging around until eight o’clock, we want to do that so as to keep them as rested as possible.

“You generally bring more people along. There are physios, people looking after the drivers, people doing the laundry. You’ve got your main team, but there are extra people added on to that for Spa. It’s all about making sure that your organisation copes with it and is ready.”

A 24-hour race is about small details. Most teams can put a quick car on the track with talented drivers behind the wheel, but winning such a gruelling event means getting every little aspect just right. For Wilson, this approach is key.
“Every person is crucial,” he says. “The guys that do the tyres work non-stop; they are fitting and re-fitting, putting them in the oven, running down to Pirelli. You’ve got the guys going for fuel all through the night, the person who is washing the drivers’ overalls, or waking the drivers up.

“There are a lot of logistical and organisational things that, from the outside, you probably wouldn’t think of,” he adds. “It’s all well and good having the plan that Steven Kane is getting in the car next, but has anybody thought to wake him up?”
Though he is now in charge of an endurance racing team, Wilson is well known for his background as a rally driver, while the M-Sport squad have achieved rallying success on a global scale.
This, he believes, gives them an added edge when competing in long-distance races like the Total 24 Hours of Spa.

“In the past rallying was very much an endurance sport. You had three days, if not longer, where you drove into the night and had to make the car last.
“Quite a lot of our guys come from rallying, so they have great experience of that side of things. It’s no trouble for them to be working into the night because it is something they are quite used to. There is quite a lot of crossover from what we have seen, especially with the old type of rallying.”
A strong run at Circuit Paul Ricard, coupled with last year’s success in the Ardennes, means that Bentley Team M-Sport will be considered a strong contender at this year’s Total 24 Hours of Spa. So, what would conquering such an iconic race mean to Wilson and his crew?

“For me, it would be everything,” he says.
“As a company we’ve had some substantial achievements: we have won Rallye Monte Carlo, Rally Finland, the World Championship for manufacturers and drivers, and we have won some big races in the Blancpain GT Series.
“But as a company, especially on the racing side, to win Spa would be everything. It is the biggest GT3 event in the world and probably the most difficult 24-hour race of all to win.

“You start Spa knowing that a massive percentage of the field could win the race, so I think that is the challenge. It would mean everything to M-Sport to have that on its list of achievements.”
____
Practical information - Total 24 Hours of Spa