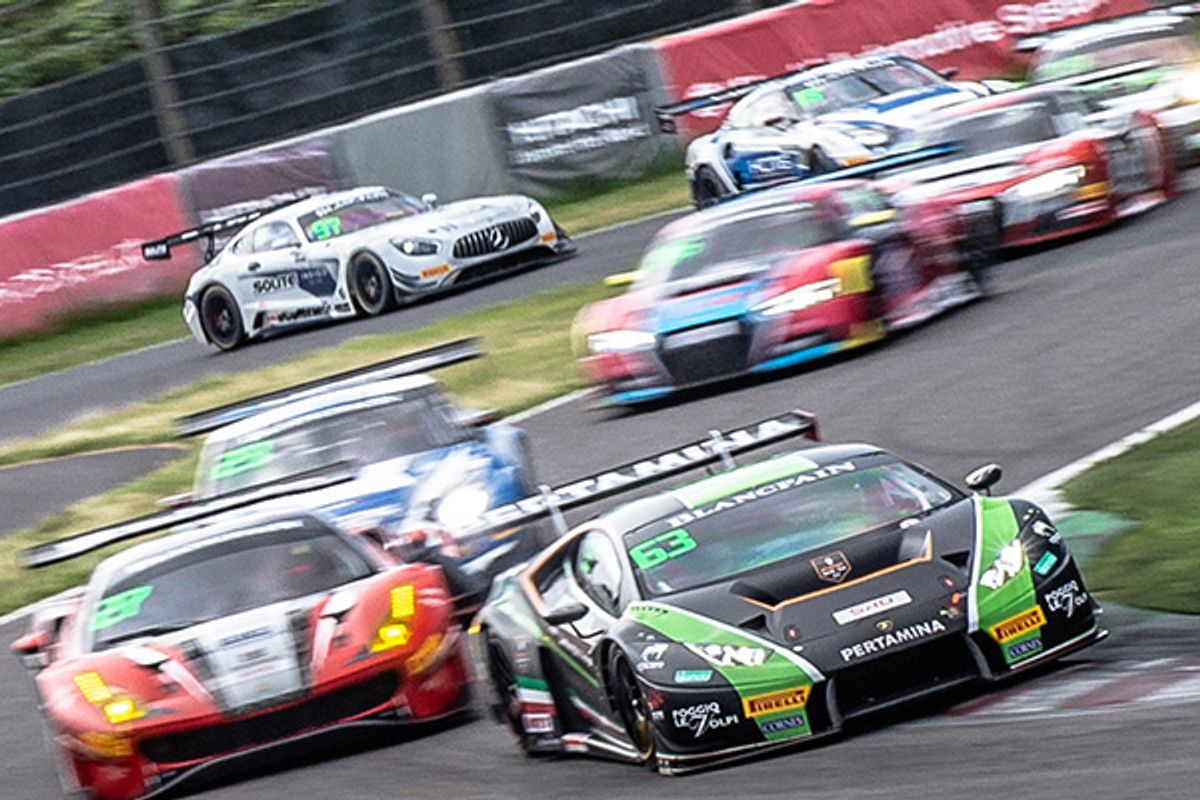 Martin Rump and Franky Cheng both claimed their maiden Blancpain GT Series Asia victories at Suzuka this afternoon after their Absolute Racing Audi led home a top-six comprising as many different GT3 manufacturers.

The Craft-Bamboo Porsche shared by Sandy Stuvik and Shae Davies finished second after starting fourth, while championship leaders Martin Kodric and Dennis Lind completed the overall podium despite serving a 10s pitstop success penalty. Ferrari, Mercedes-AMG and Nissan were all close behind.
There was also a very popular and emotional first victory in the GT4 class for BMW Team Studie pairing Takayuki Kinoshita and Sunako Jukuchou who won in front of their home crowd. The Japanese team’s second M4 also finished on the podium behind Ryuichirou Ohtsuka and Reinhold Renger’s GruppeM Racing Mercedes-AMG.

The result of this weekend’s opening race owed much to Kodric and Lind’s 10s pitstop success penalty, which the championship leaders had to serve after finishing second at Buriram. Lind had been leading up to that point thanks to winning the drag race against pole-sitter Rump into Turn 1 where the Huracan swept around the outside.
Behind, Davies completed a similar move on GruppeM’s Markus Pommer to initially claim third while leading Am driver Hiroshi Hamaguchi briefly jumped Leo Ye Hongli for fifth.
The top-two had soon established a reasonable gap to their pursuers but were seldom more than a second apart. Indeed, Rump appeared to be gaining on the Dane as the pit window approached but was badly held up by the battling GT4 leaders through Sector 1, which helped the Lamborghini establish a 4s advantage before the stops.
That, of course, wouldn’t be enough to overcome the car’s 10s success penalty, and – sure enough – Cheng emerged in the lead. However, he was probably surprised to find Stuvik’s Porsche right behind after Davies’ quick in-lap and Craft-Bamboo’s banzai pitstop propelled the car up to second.
After surviving Stuvik’s early onslaught Cheng was able to ease away over the remaining 25 minutes to claim victory by 0.870s, while Kodric crossed the line just ahead of Nick Foster’s HubAuto Corsa Ferrari, which Hongli had earlier brought back into contention, and Patric Niederhauser aboard the GruppeM Mercedes-AMG.
A puncture for Hamaguchi – the result of contact with Edoardo Liberati’s Nissan – at the end of his opening stint helped KCMG’s other GT-R NISMO of Yuke Taniguchi and debutant Alex Imperatori claim Pro/Am class honours and sixth overall thanks to the latter’s late race pass on Mitch Gilbert at Turn 1. The OD Racing Audi Gilbert shares with Aditya Patel still came home seventh ahead of Alexandre Mattschull and Raffaele Marciello’s GruppeM Mercedes-AMG, which served the full 15s success penalty during its pitstop.
Elsewhere, KCMG’s Takuya Shirasaka and Naoto Takeda scored their fifth-straight Am Cup win with Audi after finishing just 1s ahead of ARN Racing’s Ferrari shared by Hideki Nagai and Shinji Takei. AMAC’s Andrew Macpherson and William Ben Porter completed the podium in their Lamborghini.

Following several near-misses, BMW Team Studie’s Takayuki Kinoshita and Sunako Jukuchou finally scored their maiden GT4 wins, and in the best way possible on home soil. It was also the first Blancpain GT Series Asia victory for the new M4.
Ryuichirou Ohtsuka started on pole but had slipped to third behind Kinoshita and Brian Lee by the end of lap one. The opening stint was characterised by the GruppeM Mercedes-AMG yo-yoing around the top-four before finally latching on to the leading BMW just before the pit window opened.
A 15s success penalty for winning at Buriram versus Team Studie’s unhindered pitstop allowed Jukuchou to emerge with a clear track behind him, and although Reinhold Renger worked hard to reduce the deficit, the BMW still took the chequered flag amidst jubilant scenes five seconds ahead.

Team-mates Ken Urata and Max Chen completed an excellent day for Team Studie by coming home third after also serving a success penalty, while Tony Fong and Lee’s TTR Team SARD Porsche ended up fourth ahead of Gilles Vannelet and Ringo Chong, who was spun around by Craft-Bamboo’s Mercedes-AMG before the pitstops.
The weekend’s second 60-minute race starts at 10:50 tomorrow. Watch it live on the championship’s website and Facebook page.

DRIVER QUOTES
Martin Rump, #3 Absolute Racing Audi R8 LMS GT3: “This win has been a long time coming. I had some bad luck last season and wasn’t always able to show my pace, but I knew that partnering with Franky [Cheng] this year would give us a chance to something. We’ve enjoyed a consistent start to the year and had some opportunities but this is a great way to open our accounts. I did see Dennis [Lind] coming on the left-hand side at the start so gave him room and then focused on staying with him, knowing the success penalty would work in our favour. We were running together before the traffic held me up, but that’s way it goes – someone always wins and loses in those situations. What matters is that we stayed close enough to take the lead when it mattered.”
Takayuki Kinoshita, #81 BMW Team Studie M4 GT4: “It is overwhelming for the team to win at Suzuka – we have come very close but never achieved it. And it was a great race today; I enjoyed fighting with Ryuichirou [Ohtsuka], who’s a good driver, and we had so much fun overtaking some GT3s at the start of the race! We also had some light contact but that was all fun, fair racing. At least for me it was fun!”