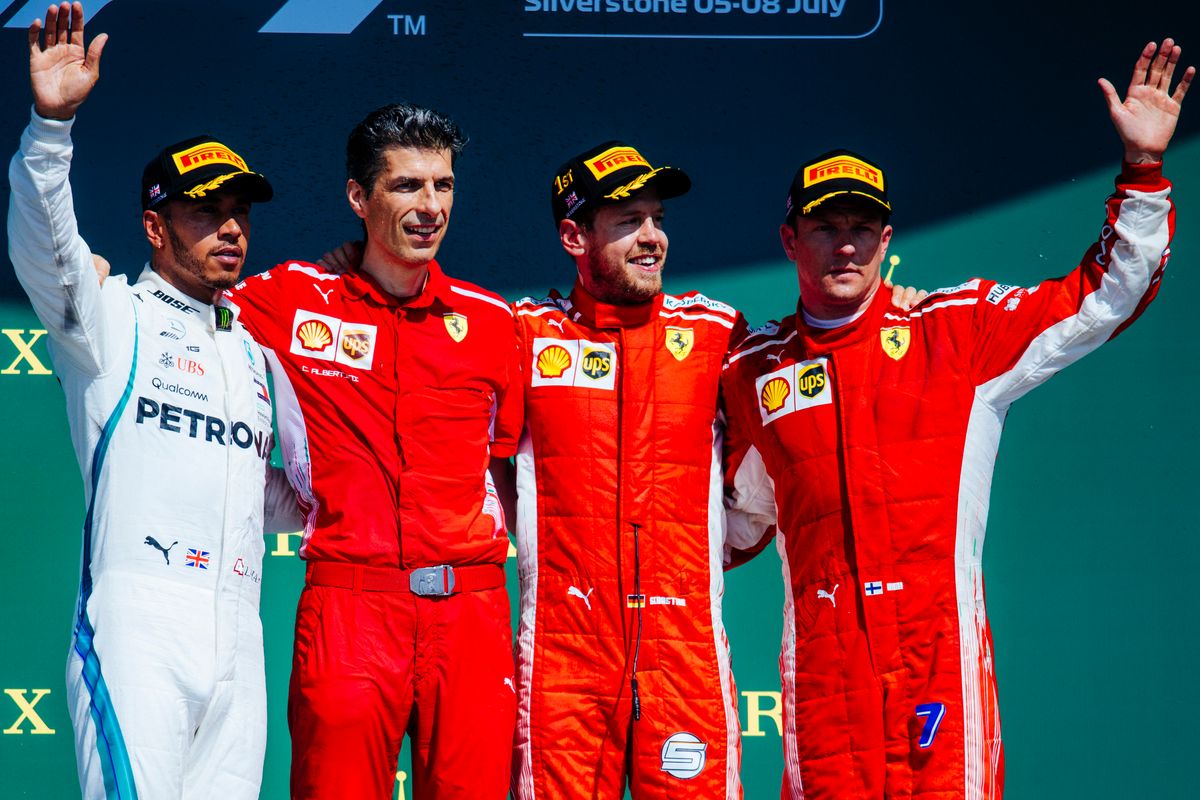 The best race of the year so far, ended with a win for Ferrari, which sees Seb ncrease his lead by 7 points to 8 in the Drivers’ championship and the team extend its advantage by 10 points to 20 in the Constructors’.  Kimi made a good recovery following a collision shortly after the start.

STORY OF THE RACE. Would the boiling hot tyres give enough grip? Yes would seem to be the answer given the way Seb shot from second on the grid into the lead. Kimi fought with Hamilton and it did not go well, with the Mercedes spinning and the Ferrari continuing in fourth place, before retaking Ricciardo at the end of the opening lap.

In the early stages, Seb’s SF71H was clearly the quickest car on track, while Kimi was right up Verstappen’s exhaust pipes. However, after seven laps, the Stewards hit Kimi with a 10 second penalty for the collision at Turn 3, while he was radioing the team asking about suspected front wing damage. They decided to bring him in on lap 13 to change the tyres and take the penalty. Kimi rejoined tenth, between Sainz and Magnussen. He immediately dealt with the Renault and set the fastest lap. The aim was to stay ahead of Hamilton when he too would have to pit.

At one third distance, Kimi had moved up to sixth and Red Bull called in its drivers to avoid finding themselves behind the Ferrari. At the end of lap 20, Seb pitted switching from Soft to Medium tyres. He emerged ahead of Hamilton, as planned. Obviously, at that point, Bottas was told to pit, but Sebastian still found himself leading, by the same margin of 4”4, as before the stop. However, now it was time for tyre management.

Hamilton pitted on lap 26, but surprisingly, Ricciardo hung on for a further five laps before handing fourth place to Kimi. With 20 laps to go, Ericsson crashed into the barriers at the first corner and the safety car came out, which changed the shape of the race. Ferrari pulled off a double pit stop, switching back to Softs, but the Mercedes duo stayed out, so that behind the Safety Car, Bottas led the way, from Vettel, Hamilton, Verstappen and Raikkonen.

At the end of lap 37, the race resumed with Seb maintaining position and Kimi fighting with Verstappen. But almost immediately there was another crash, this time involving Sainz and Grosjean at Copse. So once again the Safety Car appeared, coming back in with ten laps remaining. The first three tore off and behind them, Kimi got the better of Verstappen and set his sights on Hamilton. The next two laps were incredible with four cars fighting it out. Then, on lap 47, Seb concealed his move to the very last moment and dived inside Bottas at turn 6. He was first! And for the second time in this race, those behind switched places. Only three laps left, but there was plenty of excitement still to come. Kimi attacked Bottas and passed him decisively at turn 6. First and third “here at their home” said Seb on the radio.

Kimi: “My start was not perfect; in turn 3 I locked the inside wheel, lost a bit of grip and couldn’t slow down as much as I wanted. So I ended up touching Lewis’s rear wheel and unfortunately he span. I had to serve a ten seconds penalty and after that my race was a bit messy. Overtaking was difficult, and I fought against the Red Bulls for many laps. When I was on my own the speed was ok, but once I was behind them, their wake seemed to affect my car a lot more than the Mercedes did; I was losing a lot of downforce and that upset the balance of the car. We were quite a bit faster, but it was really tricky for us to follow them. It was a close fight for quite a lot of times, at the beginning and at the end of the race. Finally we managed to pass them and then I overtook one of the Mercedes. It was not an easy day, but I gave my best and made a decent comeback.”