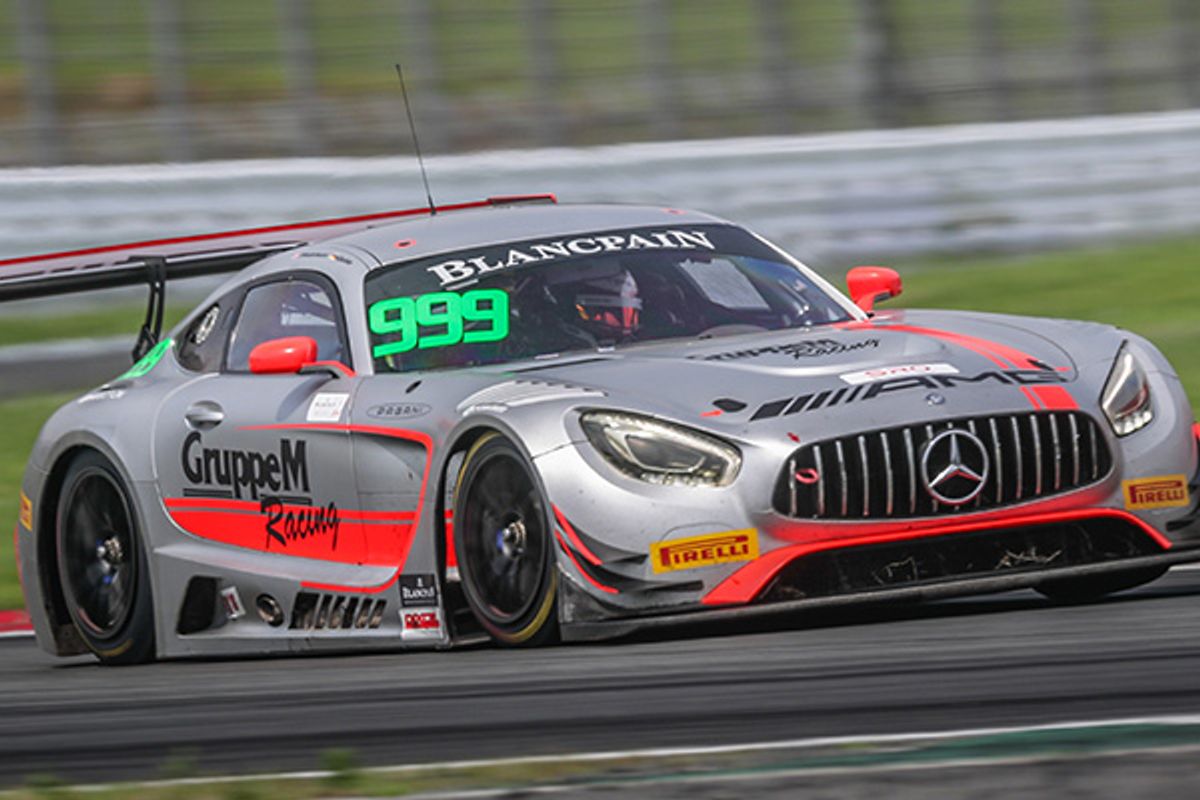 BMW Team Studie’s Jukuchou and Kinoshita complete perfect GT4 weekend
Patric Niederhauser and Nico Bastian came through from eighth on the grid to lead home a GruppeM Racing Mercedes-AMG one-two in Blancpain GT Series Asia’s second race at Fuji earlier today. Victory for Niederhauser, his third of the season, also helped the Swiss replace Dennis Lind and Martin Kodric at the top of the Drivers’ standings.

GT3: GRUPPEM HIT BACK WITH ONE-TWO

GruppeM had looked strangely out of sorts for much of the weekend but rebounded brilliantly in a race that came alive after the pitstops.

Instead it was Alexander Mattschull who emerged with the lead after Raffaele Marciello handed over in third. But the German had company in the form of Hiroshi Hamaguchi whose co-driver Marco Mapelli recovered to fourth after losing out in lap one’s first corner shuffle.

The two amateurs were also being caught by Silver-graded Nico Bastian after GruppeM’s decision to swap drivers early helped the #999 Mercedes-AMG take advantage of the pitstop success penalties served by three cars ahead.

Hamaguchi was the first to pass Mattschull, but when Bastian followed him through second quickly became first – and subsequently victory by 10.3s – thanks to the Japanese driver’s spin. The Lamborghini quickly recovered and was alongside GruppeM’s #888 Mercedes-AMG as they took the chequered flag, albeit just one-hundredth-of-a-second behind.

Further back, Taniguchi quickly passed Morris Chen’s HubAuto Corsa Ferrari after the pitstops but ran out of laps to catch his fellow amateurs ahead. KCMG’s Nissan therefore added a fourth place to its Race 1 victory after falling 0.4s shy of the overall podium, while the team’s second GT-R NISMO GT3 shared by Edoardo Liberati and Florian Strauss came home another six seconds behind after also recovering from a success penalty.

Hiroaki Nagai and Kota Sasaki’s ARN Racing Ferrari looked like a top-six contender all day, and so it proved after the pair led home Jono Lester and Nick Foster’s HubAuto Corsa-run 488 and the Craft-Bamboo Porsche shared by Sandy Stuvik and Shae Davies.

But there was disappointment for erstwhile overall championship leaders Martin Kodric and Dennis Lind whose FFF Racing Lamborghini picked up a puncture shortly after the pitstops. They therefore failed to score points for the first time this season, helping to hand Niederhauser – who occupied second before today’s race – the advantage with four rounds remaining.

In truth the Japanese pair were helped by separate incidents involving three of their main rivals. Nevertheless, another perfectly executed race was enough to put them squarely in championship contention after a tough start to the year.

While Kinoshita and then Jukuchou led throughout, GruppeM Racing and Team iRace.Win’s efforts were thwarted by separate incidents. Gilles Vannelet picked a drive-through penalty for tapping the other BMW driven by Max Chen into a spin, while a puncture for championship leader Reinhold Renger’s Mercedes-AMG consigned the German and Hwang Doyun to seventh, five laps behind the winner.

Instead it was TTR Team SARD’s Porsche that finished second after Brian Lee and Tony Fong went one better than yesterday’s result, while the recovering Chen and Max Urata secured a one-three finish for Team Studie.

Blancpain GT Series Asia now takes a two-month break before reconvening for its penultimate rounds at Shanghai on September 22/23.

DRIVER QUOTES
Patric Niederhauser, #999 GruppeM Racing Mercedes-AMG GT3: “We were optimistic about striking back after Suzuka but it hasn’t been the easiest weekend. After our worst qualifying of the season I was expecting a tough race, especially as our car isn’t the fastest in a straight line. I felt like we’d maximised the result yesterday after serving the success penalty from Suzuka but today really came together for us. This time it was other teams’ turn to have those success penalties, which made things easier.”

Sunako Jukuchou, #81 BMW Team Studie M4 GT4: “My co-driver and I agreed that today, with the 15-second success penalty, we would really prove the strength of the car and the team. With two pole positions and two wins I believe we were strong, but our goal from the start of this season has always been to win the championship. We really regret the mistake we made in Buriram, but from now onwards we will aim to win all the remaining races in Shanghai and Ningbo.”